The trailblazing diplomat was a commencement speaker, 2014 visitor, and proud parent. 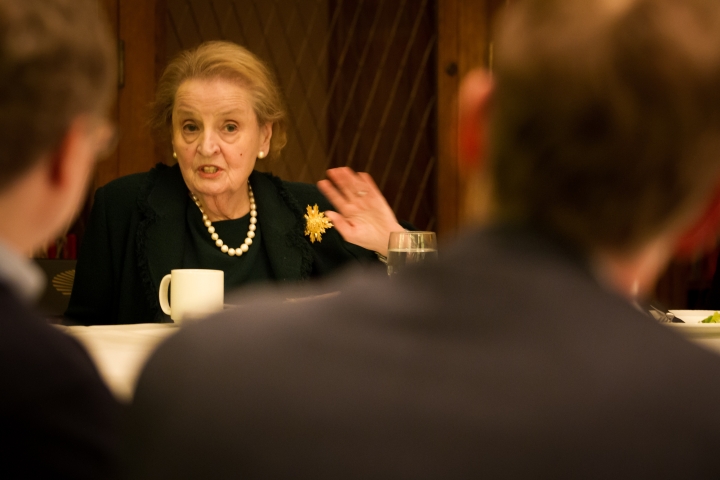 Former Secretary of State Madeleine Albright during a visit to Dartmouth in 2014. (Photo by Lars Blackmore)
3/23/2022
More Reading

Tributes to Madeleine Albright, the first female U.S. secretary of state, poured out from the Dartmouth community, where she had strong ties, upon the news that she had died of cancer Wednesday at 84.

Albright was the 2001 commencement speaker, visited and spoke in 2014, and was a proud Dartmouth parent of Anne Korbel Albright ’83.

“Secretary Albright was an unrelenting champion of democracy, human rights, and freedom, and believed deeply in U.S. leadership internationally,” said Victoria K. Holt, director of the Dickey Center for International Understanding. Holt worked for her when Albright served as secretary of state in the Clinton administration.

“She inspired those around her to solve problems,” Holt said. “Later, I saw her effectiveness chairing the Genocide Prevention Task Force, which I served on, to champion a roadmap for the U.S. to better prevent and halt atrocities—which she had faced herself.”

Daniel Benjamin, current president of the American Academy in Berlin and Dickey director at the time of Albright’s 2014 visit, called her death a shock.

“Madeleine Albright was of course a historic figure as the first woman to serve as secretary of state and a major figure in American statecraft. But she was also a person with an incredible gift for friendship, support, and encouragement,” he said.

“For lots of us who served in the Clinton and Obama administrations, she was central—someone you wouldn’t hesitate to ask for advice or even a favor. She was an extraordinarily generous person,” Benjamin said. 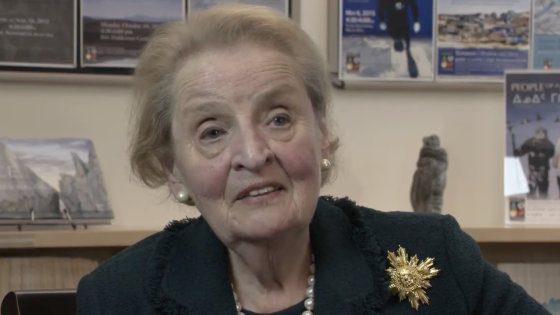 Madeleine Albright talks about her ties to Dartmouth during her 2014 visit.

Of Albright’s April 2014 visit to Dartmouth, Benjamin said, “She loved the College. She showed up dressed in green—a Dartmouth parent to the hilt. The event in Spaulding was packed, and she deployed both her insights, strong moral views, and wit to the event. The crowd loved it.”

Benjamin acknowledged that he had overscheduled her one-day visit, but she embraced the opportunity to meet and talk with everyone.

“I think she engaged every Dickey postdoctoral fellow on his or her work. She met with 60 or 70 undergraduates, and then she went on to chat with staff and everyone else. Over dinner at President Hanlon’s, she was still crisp and energetic. It was a bravura performance—and she never seemed to tire and could not have been more gracious.”

One of the postdocs who met with Albright during that visit was Jeff Friedman, now an associate professor of government at Dartmouth.

“I was struck by her keen interest in engaging with the research of Dartmouth’s faculty and fellows. She asked sharp questions, made constructive suggestions, and certainly knew how to command a room,” Friedman said. “As someone who spent a lifetime moving between the academy and government, Secretary Albright was a model for the way that our international relations group strives to bridge policy and scholarship.”