In 2012, the World Bank released a document called the “Trade Competitiveness Diagnostic Toolkit,” written to help developing nations increase their exports and thereby grow their economies. The link between exports and economic growth is well established. Studies have shown, for example, that exporting firms are on average more productive, more capital intensive, and pay better wages than non-exporters. As the document notes, “the richer countries become, the more they tend to trade; and countries that are most open to trade grow richer more quickly.” It’s no wonder, then, that advising countries about export-boosting policies falls squarely within the World Bank’s mission to end extreme poverty by 2030. 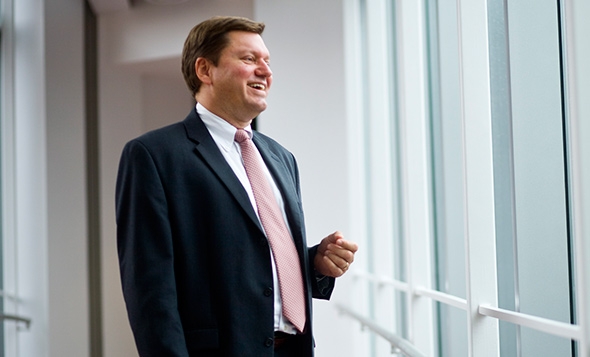 Andrew Bernard is the Jack Byrne Professor of International Economics at the Tuck School of Business. (Photo by Laura DeCapua)

For years, the World Bank and other similar organizations have looked to academic research to understand the microeconomic factors that increase exports. The stories told in that research suggest that new exporters tend to start small and, if they survive their first year of exporting, grow extremely rapidly. Those conclusions have in turn generated many papers that attempt to explain the start-small-grow-fast phenomenon, attributing it to the benefits of learning, experimentation, and understanding the reliability of partners.

But Andrew Bernard, the Jack Byrne Professor of International Economics at the Tuck School of Business, has seen a problem with this narrative: It’s based on export data that has been aggregated and then annualized, rendering it easily expressible but also misleading. Bernard and co-authors Renzo Massari, Jose-Daniel Reyes, and Daria Taglioni lay out their corrective analysis in “Exporter Dynamics, Firm Size and Growth, and Partial Year Effects,” a new working paper for the National Bureau of Economic Research.

The problem they describe is surprisingly simple. Say two firms enter the export market in 2012, one in January and the other in November. Assume their monthly performance is identical. The annualized data will show 12 months of sales for the firm that entered in January, and just two months of sales for the firm that started in November. Therefore, the January firm will appear six times bigger for 2012. If the November firm lasts through the end of 2013, the annualized data will show a huge increase in its sales from 2012 (where there were only two months of transactions) to 2013 (where there were 12 months of transactions).