Nina Montgomery ’14 started taking Latin in the sixth grade in Ridgewood, N.J. and fell in love with it. The romance continues for her as a classics major at Dartmouth, where she studies classical languages and literature at a college she chose because of “its reputation of excellent undergraduate teaching,” she says. 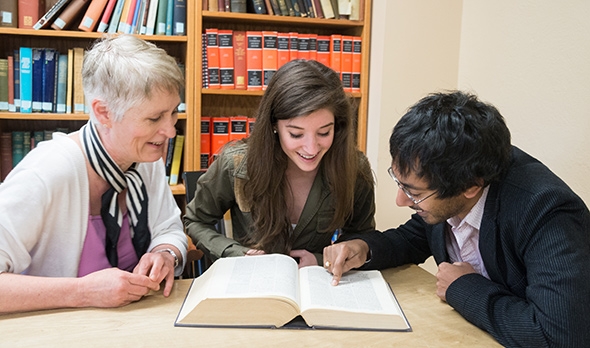 Montgomery’s research constitutes a line of detective work to illuminate a particularly brutal era in Roman history known as the triumviral period. Running from 42 B.C. to 31 B.C., the 10-year period of civil war between Caesar’s death and Octavian’s rise to power is not heavily documented.

“This silence on the bloody struggles under the joint administration of Antony, Lepidus, and Octavian is observed not just in histories produced by ancient scholars, but also in modern scholarship focusing on the last half of the first century B.C.,” she says.

Her entrée into this unchronicled era was through Horace’s Epodes and Vergil’s Eclogues, collections of poems written by these two contemporaries from the period.

“I am studying Latin poetry in an attempt to give shape to Romans’ own perceptions of historical events,” Montgomery says. “Literature allows the reader to observe the patterns and forms that Romans living through the triumvirate conferred upon their experience.”

She places a priority on studying the role of the poems within their collections, an approach not taken by those studying history through poetry, she says. “A richer understanding of history emerges from approaching each poem as contributing to and working within the greater design of the work.

”My thesis reads the Eclogues and the Epodes collections against one another, demonstrating how they engage with one another. In making sense of this engagement, I hope to demonstrate how each text enriches our understanding of the other—and of triumviral-era Rome more generally,“ she says.

Montgomery’s primary thesis adviser is Assistant Professor of Classics Pramit Chaudhuri. ”He has encouraged me to approach each chapter in a different way in an attempt to ‘fix’ the problems evident from earlier submissions,“ she says. ”He also comments extensively on the drafts I hand in, with hundreds of comments. His advice is realistic and smart, and I value his mentorship immensely.“

Professor of Classical Studies Margaret Graver is the second reader of Montgomery’s thesis. ”I took my first Latin class at Dartmouth with Professor Graver during my freshman fall, and it certainly encouraged me to pursue a major in classical languages and literature,“ she says. ”Professor Graver has read through multiple drafts of each chapter and her comments and suggestions for improvement have critically influenced the direction of the thesis."

Description
Director of Creative Writing Peter Orner’s Still No Word From You: Notes in the Margin gets a short review, which calls him “a highly lauded author whose writing, in both fiction and nonfiction, is an act of wizardry.”
The New York Times
Photos