Shonda Rhimes ’91, the wildly successful television writer and producer, told the Dartmouth Class of 2014, “Ditch the dream and be a doer, not a dreamer.”

Rhimes, creator, writer, and producer of the ABC hits Scandal, Grey’s Anatomy, and Private Practice, told the graduates, faculty members, trustees, and guests assembled June 8 for Commencement that she had wasted time dreaming of becoming Toni Morrison before she settled for a job writing for television. 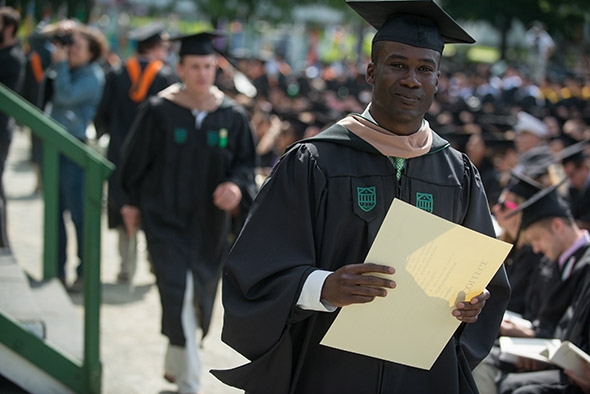 “Guess what? I couldn’t be Nobel Prize winning author Toni Morrison. Because Toni Morrison already had that job and she wasn’t interested in giving it up,” Rhimes told the crowd.

“Years later, I had dinner with Toni Morrison. All she wanted to talk about was Grey’s Anatomy. That never would have happened if I hadn’t stopped dreaming of becoming her and gotten busy becoming myself.”

Some 13,500 people filled the Green under a brilliant blue sky on June 8 to witness Dartmouth confer more than 1,900 undergraduate, graduate, medical, engineering, and business degrees.

Rhimes said it was terrifying to return to her alma mater as Commencement speaker, an honor she shares with only three other alumni—Fred Rogers ’50, Robert Frost, Class of 1896, and Henry Paulson Jr. ’68.

“When President Hanlon called me, I almost said no. Almost,” she said. “But I’m here. I am going to do it. I’m doing it. You know why? Because I like a challenge. And because this year I made myself a promise to do the stuff that terrifies me.”

With that she offered another blunt warning to the graduates. “Tomorrow is going to be the worst day ever for you,” she said. It was for her. She had been grieving at her own graduation, she said. The idea of leaving Hanover forever and heading into the world was too much. 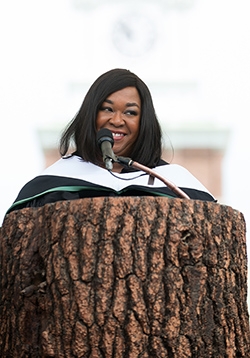 “Be brave. Be amazing. Be worthy. And every single time you get the chance, stand up in front of people. Let them see you. Speak. Be heard,” said Shonda Rhimes ’91 in her Commencement address. (Photo by Jeff Woodward)

”I literally lay on the floor of my dorm room and cried while my mother packed up my room,“ she said. Later, she added, ”If none of you lie face down on a dirty hardwood floor and cry today while your mommy packs up your dorm room, you are already starting your careers out ahead of me.“

The future isn’t about dreaming your way to changing the world, following your heart, and finding your voice, she said. It’s about finding a way to do something in a hard, often mean world. But she told graduates not to let fear, or failure, or rejection, stop them, and to keep it all in perspective.

”We are incredibly lucky. We have been given a gift. An incredible education has been placed before us,“ Rhimes said.

”Be brave. Be amazing. Be worthy. And every single time you get the chance, stand up in front of people. Let them see you. Speak. Be heard.“

Five undergraduate valedictorians from the Class of 2014—all with perfect 4.0 grade point averages—were recognized from the podium and stood as the gathering applauded. They are: Serena Liu of Bellevue, Wash.; Jonathan Pedde of Regina, Saskatchewan, Canada; Ethan Portnoy of Chappaqua, N.Y.; Natalie Salmanowitz of Menlo Park, Calif.; and Ezra Toback of Westchester, N.Y.

“Be passionate about what you do without being concerned about how your choices will dictate your future,” said valedictory speaker Natalie Salmanowitz. (Photo by Jeff Woodward)

Salmanowitz, randomly selected among the five valedictorians to deliver the valedictory address, said she has come to appreciate the way Dartmouth enabled her to pursue her own path.

”I am a neuroscience major, theater minor, and am interested in the criminal justice system. Now, I could say that all of these interests are interconnected, since they require complementary skill sets. I could also talk about how they will prepare me to be the perfect casting choice for a future TV drama that just happens to be about a neuroscientist in the courtroom.“ Salmanowitz said. ”Although, Shonda, if you ever decide to write a show along those lines, you know who to contact.“

Dartmouth offers the chance to follow a passion, often in surprising ways, she told her classmates. ”Continue to pursue your own interests, whether those follow a linear pattern or not. Be passionate about what you do without being concerned about how your choices will dictate your future. And finally, stay genuine.“

Speaking from the Old Pine Lectern, President Phil Hanlon ’77 offered another Dartmouth graduate’s perspective. He congratulated and thanked the ”unforgettable ’14s,“ the first graduating class he greeted on the stage as president.

Hanlon also paused to remember two students who died during the school year.

”Together this year, we endured the deepest loss that any community can experience—the deaths of two precious members of our student body, Torin Tucker and Blaine Steinberg.“

“You may not feel ready to leave, but you are ready to succeed,” said President Phil Hanlon ’77 in his address to the graduates. (Photo by Jeff Woodward)

He welcomed the Class of 1964, honored at Commencement as the 50th-year-reunion class. These alumni, and all “who have walked this Green ourselves,” know the challenge Dartmouth presented, he said.

“Each of you has stories of resilience—resilience that you forged here at Dartmouth. And with resilience, you discovered that in spite of any doubt—in the face of every setback—you really were ready for the challenges and opportunities of Dartmouth,” Hanlon said. “And today, as a reward, we hand you a hard-earned degree, and we say, ‘You haven’t seen anything yet.’ ”

Hanlon said that from the vantage point of the Commencement stage, “We do not see a world of insurmountable challenges. We see a fellowship of leaders, standing many rows deep, who will work to conquer them. It is a wonderful moment when the future looks so promising.”

Echoing the themes of Rhimes’ address, Hanlon concluded, “And so unforgettable Class of ’14, one final thought from your president. Just as you stepped out of your comfort zone by coming here, now you emerge from the long comforting shadow of Baker Tower into the world beyond these woods. You may not feel ready to leave, but you are ready to succeed.”

Dartmouth awarded bachelors, masters, and doctoral degrees from its undergraduate and graduate Arts & Sciences programs, the Geisel School of Medicine, Thayer School of Engineering, and the Tuck School of Business. The graduates received diplomas and shook Hanlon’s hand.

The Commencement ceremony capped a weekend of events that included a Baccalaureate multi-faith service for graduates and guests on Saturday.

Led by Stefan Deutch ’14 waving a colorful kite and by the Rev. Subdeacon Paul Feeney, Eastern Orthodox chaplain emeritus, members of Dartmouth’s United Campus Ministers processed into Rollins Chapel for Saturday’s Baccalaureate service. Together with the Dartmouth College Gospel Choir, they joined the members of the Class of 2014 and their families and friends, who filled the chapel for a celebration of love, peace, and thanksgiving, framed in words and songs drawn from the many religious traditions represented at Dartmouth.