Patrice Juah of Liberia and Vanessa Nsona of Malawi, on campus through President Obama’s Young African Leaders Initiative, spoke during a break in Associate Professor of Engineering Peter Robbie’s design-thinking seminar about the chance to study at Dartmouth. 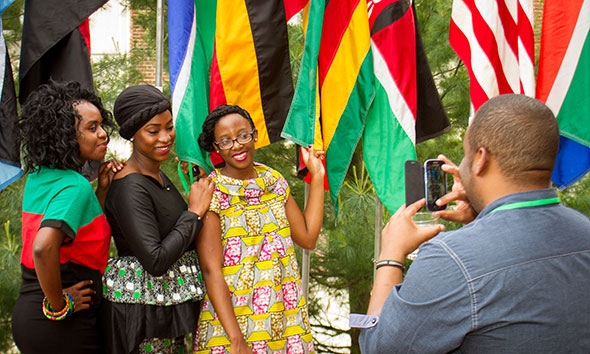 From left, Vanessa Nsona of Malawi, Ramatoulie Gassama of Gambia, and Mellisa Mazingi of Zimbabwe pose as Mshila Sio of Kenya takes a picture with his cell phone during a welcoming ceremony as the YALI Washington Fellows arrived at Dartmouth. (Photo by Lars Blackmore)

“There were 800 applications from Liberia, and 15 of us were selected,” Juah says. “I am grateful for this opportunity. It has been . . .”

When they met at Dartmouth, Nsona and Juah discovered a common interest in using Afro-centric design to build a fashion industry that will provide a livelihood to women and young people in their native countries.

Dartmouth is hosting 25 young African leaders for six weeks from June 14 through July 26 as part of the Young African Leaders Initiative’s (YALI) Washington Fellowship program. These young leaders are part of a larger group of 500 Washington Fellows selected by the U.S. Department of State out of a pool of 50,000 applicants from sub-Saharan Africa. Other participating institutions include Yale, the University of California-Berkeley, Northwestern, Morgan State, Tulane, and the University of Texas at Austin.

The Dartmouth program, administered through the John Sloan Dickey Center for International Understanding, focuses on business and entrepreneurship. For its participation in the program, Dartmouth receives a $100,000 grant, which the College will match.

Many of the Dartmouth fellows have worked for social enterprises, been involved with development through government or non-profits, or started their own ventures. 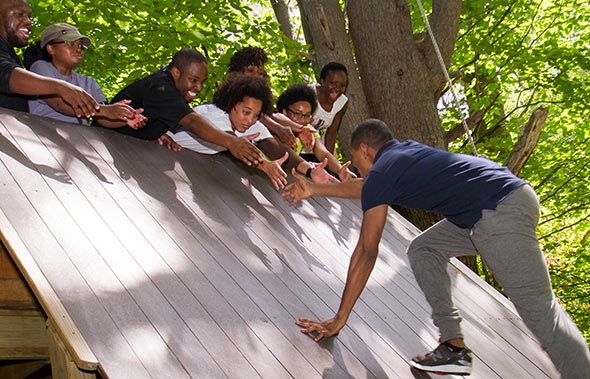 Akiules Antonio, who is from Angola and has a PhD in nuclear physics from Delft University in Holland, is a market intelligence manager for Halliburton and a prolific blogger on Angolan current affairs. In Robbie’s design-thinking seminar, Antonio used humor and conviviality to quickly organize a group of four fellows around the task of graphically mapping the issue of access to water in sub-Saharan Africa.

Other groups in the class focused on energy and housing, gender and youth empowerment, skills development, media, and the environment. Their task was to interview each other and some of the 15 Dartmouth students in the African Student Association who agreed to share their insights, to design novel approaches to overcoming the obstacles they found in these areas of focus.

The intensive design-thinking workshop at Thayer School of Engineering is just one part of the YALI Business and Entrepreneurship Institute at Dartmouth. The program, based on the experiential learning philosophy, also offers an entrepreneurship seminar that builds on the design-thinking projects, based at the Tuck School of Business, and connects participants to the Dartmouth Entrepreneurial Network (DEN).

The program also integrates team-building and cultural experiences. Shortly after the fellows arrived, they headed out to a ropes course led by Dartmouth Outdoor Programs for something of a mini-Trips experience. They will be able to visit area start-ups to hear firsthand about the challenges and opportunities of entrepreneurship, and they have invitations for weekend stays with local families.

Bernard Komu of Kenya is a software developer and the founder of the job aggregator website myNGOcareer.com. When he returns home after the Dartmouth program, he hopes to start a company that will help banana growers from his region gain access to a broader market for their produce.

“Dartmouth is a special place. I have already found a strong sense of community here,” he says. “And the skills and networks that I gain here will help me to enter the start-up world as a way of helping farmers in my hometown.”

In the Russo Gallery at Haldeman Center, the Dickey Center is displaying flags of the countries represented by the YALI fellows, along with each fellow’s bio.

The Dickey Center welcomes further opportunities for co-curricular or cultural interactions with the Washington Fellows, and invites interested members of the Dartmouth community to contact the center at dickey.center@dartmouth.edu.

View more images from the ropes course and from the opening reception.