Historian David Brion Davis ’50, whose career has focused on exploring the problem of slavery in the development of the modern world, will be awarded the 2013 National Humanities Medal by President Barack Obama in a White House ceremony on Monday, July 28, “for reshaping our understanding of history.” 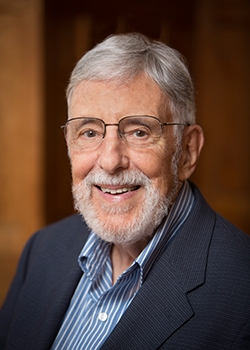 The first in his family to attend college, Davis came to Dartmouth on the GI Bill after serving in World War II. In announcing the honor, The National Endowment for the Humanities wrote that Davis “has shed light on the contradiction of a free Nation built by forced labor, and his examinations of slavery and abolitionism drive us to keep making moral progress in our time.“

Now 87, Davis is the author of an immense body of work, capped by the February 2014 release of The Problem of Slavery in the Age of Emancipation, the final book of a trilogy begun more than 50 years ago. As a professor at Cornell and later at Yale, Davis also mentored nearly three generations of doctoral students from the 1960s to the present, including Professor Robert Bonner, chair of the Dartmouth history department, and Associate Professor of History Leslie Butler. Most recently, Bonner and Butler introduced Davis to James Shinn ’11, now a doctoral candidate at Yale. Though Davis is no longer taking on doctoral advisees, he and Shinn meet regularly for discussions.

David Brion Davis ’50 took the time to reflect on his years at Dartmouth before traveling to the White House to receive the National Humanities Medal from President Obama.

“Beginning in February 2014, I was delighted to receive a whole series of marvelous reviews of my new book, The Problem of Slavery in the Age of Emancipation, the final volume of a trilogy. But with respect to my receiving the National Humanities Medal from President Obama for my lifetime contributions to the humanities, my books are overshadowed by my 46 years of teaching at Dartmouth, Cornell, and Yale, including short-term teaching stays in Britain, France, and India.

“It was at Dartmouth that I learned the basics of teaching, in 1953-54, after two years of study at Harvard graduate school, thanks to a Ford Foundation teaching internship. It was especially the mentorship of the best professors I had had as a Dartmouth undergraduate, such as Arthur M. Wilson and Francis Gramlich, that did the most to equip me to convey an understanding of the humanities to thousands of undergraduates and to direct 58 doctoral dissertations of historians who now teach at schools from Harvard and Princeton to Chicago and the Pacific coast. I came to this realization after receiving the surprising and delightful news of my national award.”

”He is very generous with his time and mentorship,“ says Bonner. ”This part of his work is very important to him, and in that sense his impact is tremendous and will reach far into the future. This is the ultimate demonstration of his stature.“

Davis also was active in the careers of many high school history teachers through professional development workshops and lectures, says Butler. ”While making the sort of landmark scholarly contributions that reshaped intellectual history as a subfield, Davis also exposed the ambiguities and contradictions of American history to a stunningly broad audience.“

Bonner, whose own work focuses on those who mounted a defense of Southern slavery, says Davis ”was a source of great inspiration to take seriously those moral dilemmas confronted by past generations. He never took the easy way out. He never dismissed the complexity of ethical struggles that were resolved long ago.“

In his latest book, Davis writes about his experience in the segregated U.S. Army during World War II. In a 1946 letter to his parents, quoted in a February 3, 2014, article in The Chronicle of Higher Education, Davis wrote that he wanted to study history because confronting uncomfortable moral problems of the past might “make people stop and think before blindly following some bigoted group to make the world safe for Aryans, democrats or Mississippians.”

In February 1947, Davis entered Dartmouth with the help of the GI Bill. He graduated in 1950 with a degree in philosophy, returning to the College in 1953 as a Harvard graduate student, teaching under a Ford Foundation fellowship. ”He has often spoken about how important this first teaching experience was to him,“ Bonner says.

Davis joined the history faculty at Cornell in 1955 and moved to Yale in 1970, teaching until 2001, when he retired as the Sterling Professor Emeritus of American History. While at Yale, he founded the Gilder Lehrman Center for the Study of Slavery, Resistance, and Abolition. Davis received an honorary doctorate from Dartmouth in 1977 and was awarded the Dartmouth Presidential Medal in 1991 by then-President James Wright.

The medals ceremony will be streamed live at www.WhiteHouse.gov/live.