Dartmouth raised a record $287.2 million in philanthropic commitments in the 2014 fiscal year, which ended June 30, including $255.6 million in cash gifts received this year. The total includes the largest gift in the College’s history, as well as record annual giving through the Dartmouth College Fund and outstanding performance by the annual funds at Dartmouth’s professional schools of business, engineering, and medicine. 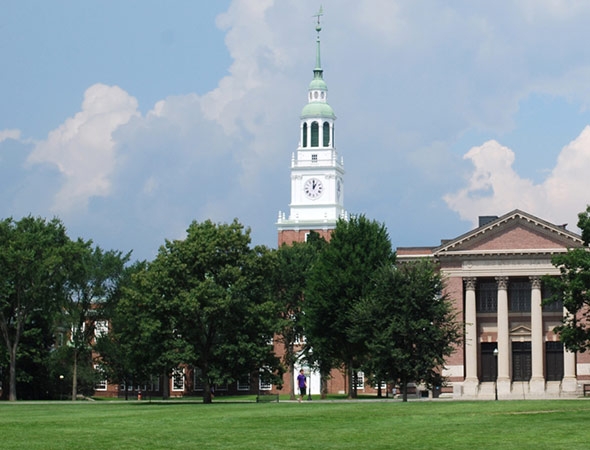 These results have come as President Phil Hanlon ’77, in the first year of his presidency, has begun to implement a comprehensive vision for Dartmouth’s future that puts Dartmouth faculty at the leading edge of discovery and gives students uncommon access to new ideas and hands-on learning experiences.

“This outpouring of generosity at every level from alumni, parents, and friends is a tremendous vote of confidence in the power and promise of Dartmouth, at a moment of extraordinary change in higher education,” says President Hanlon. “Already, we are building on existing strengths in the academic enterprise—interdisciplinary faculty collaboration and experiential learning opportunities that emphasize the transmission of wisdom as much as knowledge—and are laying the foundations to extend Dartmouth’s global impact far into the future.”

Fueled by the largest-ever single gift to the College—$100 million from an anonymous donor to support the academic enterprise, including a $50 million, 2-1 matching component to spur additional philanthropy in the year ahead—the impact of this year’s giving is already visible in initiatives that are improving student life and strengthening Dartmouth’s academic mission. Among initiatives currently under way:

Even without the extraordinary $100 million gift, the 2014 total, made up of annual fund gifts from alumni, parents, and friends of the College and Dartmouth’s three professional schools, as well as restricted gifts to the endowment, surpasses the five-year average of $154.6 million. Annual gifts and endowment income underwrite approximately 39 percent of the overall operating budget.

Annual Giving Is at All-Time High

An unprecedented group of more than 100 Dartmouth alumnae has committed gifts of at least $100,000 each to Dartmouth’s annual fund—raising $14.8 million toward scholarships for undergraduate women through the Dartmouth College Fund.

Read more about the new Centennial Circle of Dartmouth Alumnae.

Celebrating its 100th anniversary this year, the Dartmouth College Fund raised a record $48.3 million in cash gifts, and, with interest from endowed annual fund gifts, achieved $53.7 million. Annual unrestricted gifts through the Fund help support financial aid for undergraduates who need it—nearly 50 percent do—including more than 400 who are the first in their families to attend college. Fund gifts also directly sustain the full undergraduate experience, from the academic core and independent research to athletics, outdoor programs, and foreign study.

Why such strong giving to Dartmouth this year?

“These results are unambiguous,” says Bob Lasher ’88, senior vice president for Advancement. “At every level, the Dartmouth community has wholeheartedly embraced the vision President Hanlon has set out for the College—and the important contributions Dartmouth students, faculty, and alumni are making in the world every day.”

He adds, “We are grateful to everyone who gave, and commend our 3,800 alumni volunteers for their initiative, stamina, creativity, and persuasiveness. They worked tirelessly to make these amazing results possible.”

Description
Cody Meissner, a professor of pediatrics and medicine who serves on the FDA Vaccines and Related Biological Products Advisory Committee, says of the latest COVID-19 booster plan, “We need to see what happens with disease burdens.”
The Wall Street Journal
Quoted
Quote