Irene Kacandes is a professor of German studies and of comparative literature. 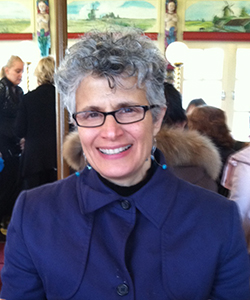 I’m an American child of the Cold War. The yellow alarm pole was next to my elementary school, and when it went off we practiced duck and cover. I had a repeating dream of a red monolith I knew was “Communism,” even as I had little sense of what that meant other than “bad” and “dangerous.”

I’m a Dartmouth professor currently directing the Department of German Studies’ Foreign Study Program in Berlin. For weeks now, local residents have been commemorating events that led up to the Mauerfall, the opening of the Berlin Wall on Nov. 9, 1989. I plan to walk around in the city center and take in the atmosphere. I’m particularly eager to see the Lichtgrenze, literally “border of light,” a marking with lamp poles where the wall that divided this city long stood.

I remember the actual wall. I first visited Berlin on a high school exchange. I recall having cramps during the whole visit and being simultaneously intimidated and fascinated by the military presence, a presence I didn’t know about in suburban New York. I promised myself I’d come back one day.

Return I did. From September 1978 through June 1979, I rented a room in the southwestern part of Berlin—at that point known as the American sector—while I attended courses at the Free University, an institution that was founded in 1948 by students who didn’t like the increasingly ideological education they were subjected to at the Berlin University in the Soviet sector.

My encounters with the inner Berlin border were frequent that year. In the first instance, my hard-earned money from waitressing the summer prior was not going far enough, and I had to find a job. A friendly Greek I’d met got me a job as an usher in the famed Philharmonie, the impressive home of the Berliner Philharmoniker, designed by Hans Scharoun. Several times a week I took a long bus ride over the course of which the neighborhoods got sketchier and sketchier, and the city darker and darker, until the lights of the philharmonic hall suddenly appeared in the blackness. I always felt like I was at the edge of the world, not at the center of the undivided city, though that’s exactly where I was.

In the negotiations that divided up Berlin among the victorious allies, the Soviets secured for themselves most of the impressive buildings including the State Opera and many theaters. As someone who had officially registered with the police, I could take advantage of a special provision for West Berliners who wanted to visit the East and avoid the long lines at Checkpoint Charlie, the border crossing run by the Americans and the mandatory money exchange at the official rate of one West Mark to one East Mark. One day I risked changing money at a better rate in the West and stuffing it into a finger of a glove. I’m not sure if my nervousness was showing or if I just had bad luck, but for the first time ever the border guard looked me straight in the eyes and asked if I had East marks with me. I’m a terrible liar, but I was so scared I stared back at him and said, nein. He let me pass. I never tried it again.

With the celebratory mood around here these days it’s a little too easy to forget that the German Democratic Republic, to use East Germany’s official name, was a totalitarian state. That’s harder to forget for anyone who actually saw the wall—with its barbed wire, antitank barriers, towers, searchlights, and armed guards—or for people who lost a loved one who died trying to escape or during incarceration. Two years after my Berlin sojourn I met someone who’d spent time in an East Berlin prison and had her health permanently ruined as a result. She and her husband eventually became two of the almost 300,000 “Freigekaufte,” East German citizens whose departure from the country was procured through a western buy-out.

I was in the U.S. on Nov. 9, 1989, and learned from graduate school friends about East Germans being allowed to pass through the wall and the East German border. We were incredulous, and of course deliriously happy. I gladly think back to the first time I walked through the Brandenburg Gate, which for so many years had functioned as a focal point for the impassability of the wall. I heard a talk recently by the then mayor of West Berlin, Walter Momper, recounting all the bureaucratic preparations for the opening of the German-German border.

As fun as thinking about 1989 can be, I will take time on Sunday to remember other events that occurred on the ninth of November. Like the failed Hitler putsch of Nov. 8 and 9, 1923, and the destruction of countless Jewish businesses, places of worship, and homes during Nov. 9 and 10, 1938. I hope others, too, will pause to remember those chapters of German history.

Still, I suspect I’ll mainly be feeling celebratory. After all, given the actual and threatened violence of the Cold War, and all the nations currently in various states of civil war, we should be genuinely thankful for the miracle of the peaceful reuniting of the German people.