Devin Balkcom on Robots and the Mechanics of Motion 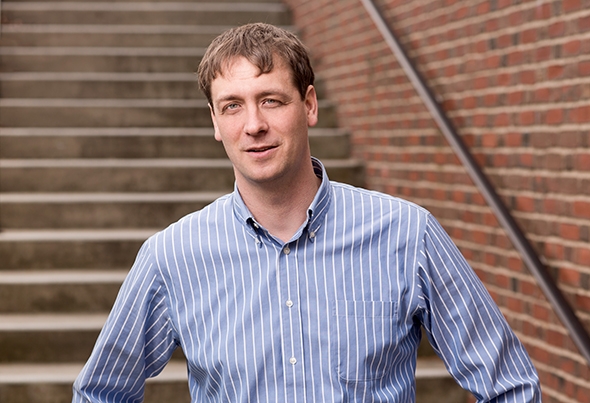 “I’m not worried about robots achieving human intellect and taking over the world. That’s not how it works,” says Associate Professor Devin Balkcom. (Photo by Rob Strong ’04)

Devin Balkcom, an associate professor in the Department of Computer Science, spends a lot of time thinking about the best way to get from here to there. Specifically, he studies the fundamental mechanics of locomotion and manipulation—the interface between robots and the physical world. In a recent conversation, Balkcom, who earned his PhD in robotics from Carnegie Mellon University, shared his views on optimal trajectories, knot tying, and the real reason humans should fear robots.

Here’s a basic question: What exactly is a robot?Roboticists like to claim a lot of territory. Is a car a robot? Well, certainly anybody would say a self-driving car is, even if there’s no humanoid robot in it. Is a dishwasher a robot? On The Jetsons, there was a robot that washed dishes, but these days we probably don’t think that a dishwasher is cool enough to be a robot. So maybe things are robots until they’re familiar to us, and then they’re just machines.

Your research focuses a good bit on motion planning, also known as “the piano mover’s problem.” Is the idea to navigate a mobile robot?Motion is what separates a robot from a computer system or a network of sensors. The motion could be simple (move a mobile robot from one place to another), or complex (disassemble a car engine to make repairs). We would like to have algorithms that automatically plan motions to achieve tasks efficiently and safely.

Some of our work attacks this problem in a general way. The algorithms can solve a wide family of motion planning problem for a wide variety of systems. But some of our most unique work has shown that when something special (for example, a complete mathematical model) is known about a particular robot or system, we can sometimes find better solutions with less computational power.

Can you provide an example? Like what’s the fastest way to drive R2D2 from ‘Star Wars’?We know that, like a car, a wheelchair, or those Roombas that vacuum the floor, R2D2 can’t move directly sideways, but some parallel parking maneuver will work. But how far should the robot drive forward? How far should it turn? I would classify this as the sort of fundamental problem we attack by a combination of mathematics (pencil and paper) and computer science. In some specific cases, you can actually solve the problem exactly, and I think that’s a neat thing to do.

You’ve built a robot capable of folding a paper hat and simple systems that assist people in accomplishing everyday tasks. Your lab also focuses on knot-tying machines. Why the latter?We would like to understand: What is knot tying? It’s not about what the robot does. We can build a new robot and program it. What we’re not good at is viewing the task as the string itself. What’s it doing? What is the simplest set of actions to tie a complicated knot? How hard is knot tying, and how do humans accomplish hard manipulation problems like knot tying?

But why? What are the practical applications for knot-tying robots?Medical robotics is one area where people tie a lot of knots, especially in cases where you would prefer to not introduce too many extra substances. Maybe you’d like to tie off an intestine or vein or artery. It’s a very natural way to connect things using friction, and it’s reversible in some cases. So applications like that have some promise.

People want to manipulate flexible objects in general. We want to fold shirts; we want to build decorative structures and make clothing that has knots in it without having to enlist young children with small hands. We want to actually automate these processes, so manufacturing is a typical go-to for a lot of robotics.

You work in the lab with undergrads and PhD students whom you say should get the lion’s share of credit for a lot of the advanced robotics projects. But you also teach intro classes in computing and programming. What’s that like?At the beginning of a big intro class people often say, “I’m not good at this stuff.” It’s exciting that that’s not right, and they find that out throughout the term. Most people can learn a tremendous amount and they can build something really neat. If you can imagine it, you can build it. You can’t necessarily do that in engineering or in robotics, where you need physical parts.

In a short story written in the 1940s, sci-fi author Isaac Asimov outlines three “laws of robotics”—the first being that robots must never harm human beings. Should people be afraid of robots?Yes.

So that Frankenstein fear—there’s really something to it? I’m not worried about robots achieving human intellect and taking over the world. That’s not how it works. These are simple machines; we call them robots because we call them robots, not because they have human-level intelligence.

On the other hand, people do put guns on robots, and they build guided missiles and replace soldiers with drones. That is a real ethical dilemma. How do you think about problems where human decision is being taken out of the loop, or humans are making decisions because a robot is at risk on the one side, but on the other side people are being killed? So I think a lot of things to fear are more about how humans interact with robots than what robots do to humans.

What were you like as a kid? Did you always like computers?I was broadly into nerdy things [laughs]. I liked science and math but also reading and English and writing and history.

Your daughter, Zela, is almost 2. How much time is she allowed on the computer?So far we’re at exactly zero. I’m pretty rigid about this. I don’t know if I’m talking as a computer scientist or as a parent, but I think human beings tend to be easily addicted to certain things: repetitive motion, flashing lights, moving sounds and colors. I don’t know whether that’s good or bad, but it certainly can drive out some other things. So I hope she can learn lots of other things before encountering too much technology, but I also hope she can explore the things that I’ve found to be really exciting and interesting.

What part of your job is the most fun?One of the most fun parts is that there isn’t one fun part. I get to teach some of the best students in the world. I get to interact with really smart people. I get to work on problems that are of interest to me—I wonder how origami works, or folding cloth, or tying knots. Yes, I have to answer the question: How is this useful? But there’s also the chance to say, this is just interesting. There’s a lot of freedom.