In Its First Run, December Bridge is a Hit

Read the full story by Kirk Kardashian, originally published by the Tuck School of Business.

If you want to know the market potential for Google’s self-driving cars, you might want to ask Janine Leger ’15. She and five teammates in the December Bridge Program at the Tuck School of Business just delivered a 40-minute PowerPoint presentation on that topic to a panel of business people from different industries. On another team, Danny Reitsch ’16 and his colleagues assessed the market value of Keurig-Green Mountain, concluding that it’s currently undervalued by the stock market. “The market’s not taking into account the huge growth that’s going to come from new products, partnerships, and markets,” Reitsch said, sounding like the investment banker he hopes to be one day. 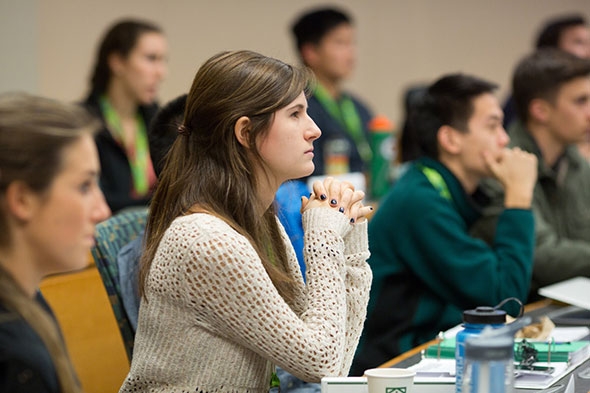 Leger and Reitsch are part of the class of 53 undergraduates, mostly from Dartmouth, who took part in the first-ever December offering of Tuck’s Business Bridge Program. Since 1997, Bridge has offered rigorous business education to students from liberal arts colleges who want to prepare for a career in the business world. Traditionally, Bridge took place only during the summer, but this year Tuck began offering the program during Dartmouth’s break after Thanksgiving. The idea was that running Bridge in December would give students more freedom to use their summers for internships and other real-world experiences. The trade-off is that December Bridge is three weeks, instead of four in the summer session, so it’s an even more intense period of learning. Students take at least four classes per day, including Saturdays, and the rest of their time is filled with homework, group projects, panel discussions, and career exploration.

“This group of students has been engaged, hardworking and tremendously capable,” said Bob Hansen, the Norman W. Martin 1925 Professor of Business Administration and co-faculty director of Bridge. “They’ve been a real pleasure to work with and to get to know.”