Read the full story by Kate Siber ’02, originally published by the Tuck School of Business.

Investor, philanthropist, entrepreneur, and musician Roger McNamee, Tuck ’82, walks onto the stage in jeans and a hooded purple sweatshirt. The theater is packed and dimly lit. The audience is a sea of expectant eyes. McNamee is used to being on stage—he is a guitarist for the prolific rock band Moonalice—but today, a calm, mostly overcast day in June 2011, he is on stage for a different reason. Today, he is the hyper-successful Silicon Valley investor, and he is about to let the audience in on a secret—or maybe a few. 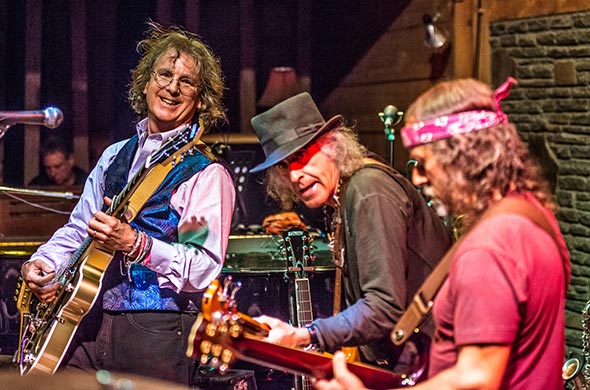 The stage is a familiar place to Roger McNamee, Tuck ’82, at left, rocking with his band Moonalice. (Photo courtesy of the Tuck School of Business)

McNamee may not look like a stereotypical finance guy. His shoulder-length gray hair flops as he speaks. His flyaway eyebrows rise and fall with enthusiasm. From behind round wire-rim glasses that make him look like an eccentric savant, he gazes intensely at the audience. McNamee has always been different, but that doesn’t bother him. After all, it is his ability to think differently that has gained him the sort of success that landed him here, at the inaugural TEDx Santa Cruz conference.

“Have you ever been in the position of watching Silicon Valley take off and wish that you had known what was about to happen?” he says slowly, emphatically. The audience chuckles. Over the last few years, McNamee has noticed a shift, so he devised several hypotheses about the tech market and ran them by an inordinate number of people in the industry to see if anyone could refine them. This is what McNamee does best: He is a tireless observer and a brilliant analyst, but he is also unfailingly open-minded and a steadfast believer in open-source ideas.