‘A Vital Responsibility’: An Interview With Phil Klay ’05

Phil Klay ’05 won the 2014 National Book Award for fiction on Nov. 19 for his first collection of stories, Redeployment. Klay served as a public affairs officer in the U.S. Marine Corps in Iraq from 2007 to 2008 before returning to New York to complete an MFA at Hunter College. Deceptively simple, the stories in Redeployment reflect the complex American experience in Iraq, bringing home what Klay calls “the strangeness of war.” Told through the eyes of a returned veteran who has to put down his old dog, a military chaplain confronting his unit’s possible war crimes, a foreign service officer whose idealism is stretched thin by a mandate to teach Iraqi children baseball, and other richly realized characters, these narratives help create a space for a national conversation about the meaning of our recent military conflicts. Klay lives in Brooklyn, N.Y., with his wife, Jessica Alvarez ’06. 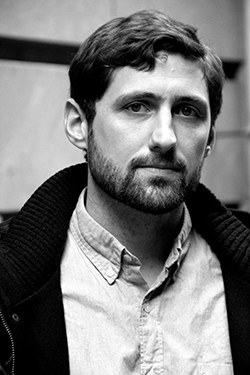 “Storytelling is a vital responsibility that we have, both as citizens and as people,” says Phil Klay ’05. (Photo by Hannah Dunphy)

How does it feel to win a National Book Award for your first book?It’s amazing. I was not expecting it at all.

Redeployment is full of compressed language. Does poetry influence your fiction?I read a lot of poetry, actually. At Dartmouth I studied with Tom Sleigh. I read a lot of poetry while I was in the military—Eliot, Jack Gilbert, Gerald Manley Hopkins. I memorized one of Charles Olson’s poems in the Marines: “I come back to the geography of it”—that one—“the land falling off to the left/where my father shot his scabby golf.” I still have it in my head. So yeah, I try to always be attentive to the rhythms of language. Whether you’re writing prose or poetry doesn’t matter.

Why write about the experience of war?Storytelling is a vital responsibility that we have, both as citizens and as people. It’s important, as citizens of a country that wages war, to understand what that means on a very basic level. It matters in terms of the political decisions we make, but also how we react to and treat veterans.

What’s your writing process?I do a lot of rewriting. Every story in the collection is probably written about 15 or 20 times. I always write by hand first, and then I’ll transfer it to the computer, but loosely, because when you’re first writing a story you’re learning how to write that story. It takes a bunch of tries to get it right. When it’s at a stage where I want to share it, I send it out to a bunch of people for feedback. Then I slowly try to make the stories more interesting, more complicated. That’s pretty much it—a long, slow, sometimes painful process.

Why fiction?Fiction is the best way I know to think something through. You can take real situations and put them under pressure. You can change them so you’re really getting down into the things you want to figure out. If I were writing about real people, I would feel constrained by the fact that they might read it. With fiction, your only responsibility is to the emotional truth of the experience.

Do you have advice for aspiring writers?Yeah—persistence. [Laughs.] It’s a really worthwhile thing. We need good stories. It’s a matter of finding what you’re desperate to get across, figuring out a way to do that effectively, and slowly, slowly working on it. I guess my advice is to keep a certain amount of humility. Forgive yourself for all the mistakes you’re going to make, and be obsessive about learning what your flaws are.

What Dartmouth experiences shaped you?First off, friendships with really smart, intellectually engaged people. That’s a big deal. And the professors I had a chance to study with. Certainly studying with Tom Sleigh was huge. I took classes with Cynthia Huntington—who was a finalist for the National Book Award a couple of years after I graduated. I studied history as well: Latin American insurgencies with Professor Tanalís Padilla, and Islam with Professor Garthwaite. I was on the rugby team and the boxing club.

You started at Dartmouth in 2001, right after 9/11.I found out about 9/11 on a Dartmouth DOC trip. Which was a very strange way to find out. We would hear rumors from people about what had happened, and at first we thought it was maybe just something you told people on the Appalachian Trail to screw with them, right? But then it became clear that it was real. I’m from New York, so it was emotional. A strange, disorienting thing. I don’t know. I felt strongly about it, but it’s not related to why I joined the military.

Why did you join the military?Neither of my parents served, but I’m one of five boys, and three of us joined. We were a nation at war. If you believe in the idea of public service, then it just makes sense. That’s what I was thinking at the time. There was the question of whether we should be at war, all of the broader political questions, and there was, what personally can I do? During my junior summer I did officer training, and I was commissioned as a second lieutenant when I graduated.

You were a public affairs officer in Iraq. What did you do?A range of things. I had a group of Marines who worked for me, who took photographs and wrote newspaper articles for base newspapers and other publications. I handled media embeds. I was an adviser to a general. It allowed me to see a lot of what was happening. I was there during the surge, in Anbar Province. I got to do everything from sit in on briefings to hang out with grunts and engineers and adjutants and different types of Marines and soldiers and sailors. I definitely think that’s related to the shape of the book. I was just aware of things that were going on that were interesting or confusing to me, that I wanted to think about.

Tell me about your transition back to civilian life.I got out of the military in 2009, and I went to New York, to a creative writing program, Hunter. It was great. It was also strange, because you’re a veteran, and yet there’s not a whole lot of sense that we’re a nation at war. Meanwhile some folks that I served with are going to Afghanistan.

Your stories force readers to think about the complexities of U.S. engagement in Iraq. What are your feelings are about that mission now?Complicated. I mean it’s pretty clear, some of the grotesque irresponsibility, particularly in the early stages of the war. And I look at Iraq today and it’s absolutely horrific what’s going on. It’s a tremendous human tragedy. I feel a lot of grief and rage knowing the level of suffering of the people over there. I mean, it matters to me. I think a lot of vets feel that. It’s not abstract. But certainly there were periods where there were people doing a lot of very good work. I worked with a lot of great Marines. And I certainly hope, if nothing else, we’ve learned to be a little more responsible in our exercise of brute force.

What do other veterans say about your stories?Some folks are happy that I wrote the stories because, as I said, this stuff matters to us. A lot of us felt very keenly the disconnect between coming home and being a part of this huge mission that then doesn’t get as much attention state-side as you would want it to. And at readings and with veterans groups people tell me their stories. Which is what I wanted—to have more conversations about Iraq.