‘The Art of the Equation’: Mathematical Formulas on Exhibit

An exhibition of prints based on mathematical expressions produced by eminent scientists and mathematicians is a “sampling of beautiful mathematics,” says Professor Daniel Rockmore, who curated the collection. The exhibit, which has been to Zurich, Portland, Ore., and Seattle, is now at the Yale University Art Gallery in New Haven, Conn. 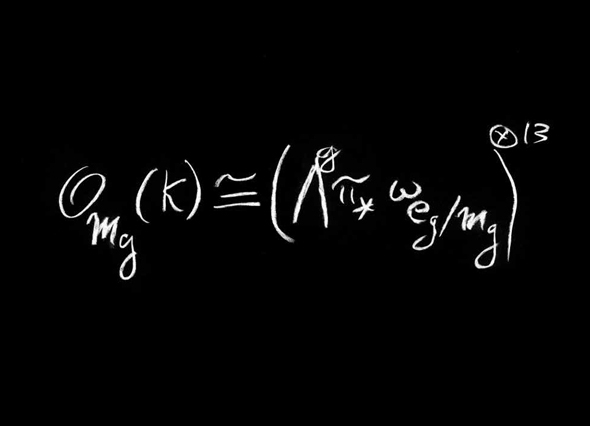 “The prints are formally stunning and conceptually engaging,” says Molleen Theodore, the assistant curator of programs in the education department at the Yale art gallery. “They use a print process—aquatint—that occupied artists in the 1970s in particular, perhaps for its purity or the way it resembles a chalkboard.”

“The Art of the Equation” is displayed in the lobby of the Yale gallery, where Rockmore, the William A. Neukom 1964 Distinguished Professor of Computational Science at Dartmouth, will lead a discussion about the collection at 5:30 p.m. on Thursday, Jan. 22, in Yale’s Robert L. McNeil, Jr., Lecture Hall.

Rockmore traces his fascination with the depiction of formulas as art back to the inscriptions on his physicist father’s chalkboard. He recalls them as “beautiful, elegant, and full of mystery. I just liked the way it looked. The fact that these symbols meant something to someone made me feel like it was written in a beautiful calligraphic code.”

Rockmore collaborated with print publisher Robert Feldman on the idea of a portfolio of prints of mathematical expressions. Feldman commissioned the project, now on view at Yale, which was a joint undertaking of his Parasol Press, the Yale art gallery, and the Bernard Jacobson Gallery in London. 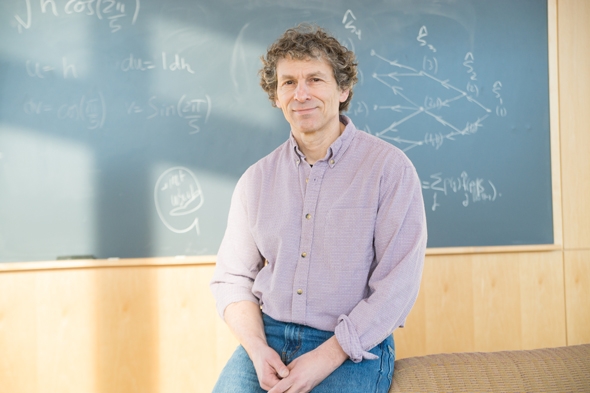 “We were looking for 10 ‘greats’—Nobel laureates, Fields Medalists, and recipients of comparable international honors, such as the Max Planck Medal in physics (Germany), The Lorentz Medal in theoretical physics (the Netherlands), the Turing Award in computing (U.S.), and the Abel Prize in mathematics (Norway),” says Rockmore. “We focused on mathematicians or mathematically inclined scientists whose work represented a spectrum of mathematical ideas.”

“The Hood Museum of Art was thrilled to recently acquire this portfolio,” says Michael Taylor, the Hood’s director. “It has enormous potential for teaching at Dartmouth and will be enjoyed by students and faculty for generations to come. We look forward to displaying the prints at the Hood in the near future and allowing our visitors to explore the fascinating relationship between art and mathematics.”

Rockmore says the prints were created from what each of the participants chose as his “most beautiful or elegant mathematical expression.”

Each expression was executed by the participating mathematician or scientist and forms the basis of an aquatint print accompanied by text from the contributor—a statement that offers context or an explanation of the expressions. As curator, Rockmore made the contacts, worked with the participants to encourage the execution of their works, edited the statements accompanying the prints, and wrote an introduction to the collection.

“These elegant streams of symbols and diagrams serve as mathematical madeleines for moments of discovery and connection, be they between ideas or people or both,” says Rockmore. “In those connections our artists—and all mathematicians, computer scientists, and physicists are artists—find beauty.”

The scientists represented in the collection are: