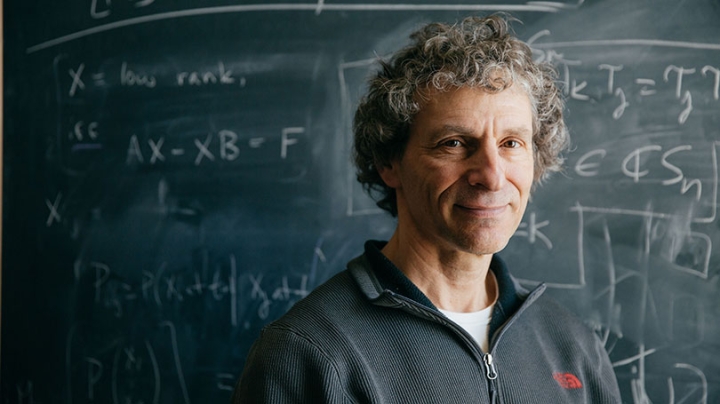 Daniel Rockmore, the William H. Neukom 1964 Distinguished Professor of Computational Science, has helped to curate “Picturing Math,” an exhibit of aquatints on display in the Metropolitan Museum. The prints show formulas and equations by eminent mathematicians. (Photo by Robert Gill)
2/14/2017
Body

From a young age, Daniel Rockmore, the William H. Neukom 1964 Distinguished Professor of Computational Science, admired the visual beauty of mathematical symbols. He loved watching his father, a physicist at Rutgers University, at work.

“A visit to that office was a treat, especially for access to the blackboard, full of equations when I arrived, incomprehensible, but to me, beautiful, elegant, and full of mystery,” Rockmore writes in the introduction to a print collection he has curated, part of which is now on view at the Metropolitan Museum of Art in an exhibit called “Picturing Math: Selections from the Department of Drawings and Prints.”

The complete set of 10 aquatint prints, which have also been displayed at the Hood Museum of Art and other galleries around the world, is a collaboration between Rockmore and art publisher Robert Feldman, of Parasol Press. Each page presents a stark white mathematical expression on a black background, along with an essay by the mathematician/artist.

The title of the collection is “Concinnitas,” a word used by the Renaissance philosopher Leon Battista Alberti to describe the balance of number, outline, and position he thought characterized a beautiful work of art. Rockmore chose the name, and also the artists for the portfolio. They are Michael Atiyah, Enrico Bombieri, Simon Donaldson, Freeman Dyson, Murray Gell-Mann, Richard Karp, Peter Lax, David Mumford, Stephen Smale, and Steven Weinberg.

Jennifer Farrell, the organizer of the exhibit and the Met’s associate curator for modern and contemporary prints and artists’ books, says viewers respond to the images in a variety of ways, depending, she speculates, on their math proficiency.

“My background is in conceptual art, but I am somewhat math-phobic,” Farrell says. “So for me, these prints seem to be in another language.” Yet Farrell says even though she has no idea what some of the formulas and equations mean, as visual marks they catch and hold her attention.

“For Dan Rockmore, though,” she says, “it must be almost like reading a book. This is an exhibit that can be read on many levels.”

That’s precisely what Rockmore hopes will make it a conversation starter.

“I suppose when people walk into the museum, they’ll look at these prints and say, ‘Why are these here?’ And I hope they’ll ask themselves, ‘What is math?’ and ‘What is art?’”

Rockmore himself ponders questions like these. “Every artist is a little bit of a mathematician and every mathematician is something of an artist,” he’s written in a column for The Huffington Post. Not surprisingly, math and art share space in his Dartmouth office. Near a blackboard covered with hand-scrawled computations hangs a geometric painting by Frank Stella.

In fact, Rockmore’s interest in art is what sparked the serendipitous chat on an airplane, several years ago, that led to “Concinnitas.”

He happened to take a seat next to Parasol Press’s Feldman, and they struck up a conversation. Rockmore learned that Feldman had published such contemporary artists as Sol Lewitt and Chuck Close. When Feldman found out that Rockmore is a mathematician who loves art, he mentioned he had always wanted to publish a set of prints showcasing the work of Nobel Prize-winning mathematicians.

“I had to tell Bob they don’t give the Nobel for math,” recalls Rockmore, laughing. “But I loved the idea and told him if he was still interested in pulling it off, then I was ‘in’ and would be happy to help organize it and get great people for the project.”

He didn’t put himself on that roster. “The portfolio participants are among the great mathematical scientists of our age. Their work and mathematical legacy belong to a truly rarified class, way beyond anything I—or, for that matter almost any other mathematician—has ever accomplished,” says Rockmore.

“Picturing Math” runs at the Met through May 8. Some of the “Concinnitas” prints are also being shown at another New York gallery, the Hebrew Union College-Jewish Institute of Religion Museum, in an exhibit called “Paint by Numbers,” through June 30.