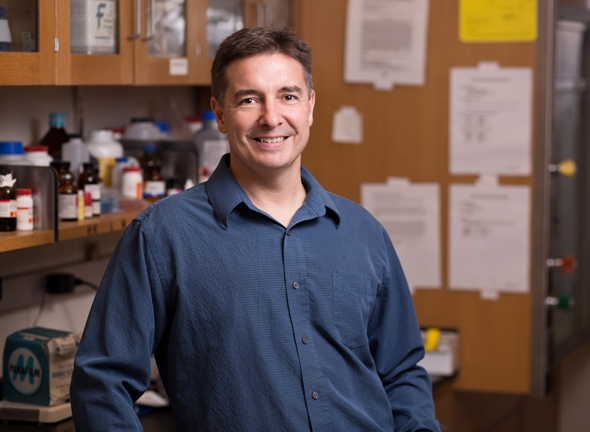 “We just got done with a six-year grant to see if exercise could help with attention deficits in ADHD, and impulsivity issues that don’t rely on the hippocampus,” says Professor David Bucci (Photo by Rob Strong ’04)

With about 100 billion cells in the human brain (and each having upwards of 10,000 connections with other cells), David Bucci, a professor of psychological and brain sciences, pinpoints the big question in 21st-century brain science: How do the cells in different regions interact and give rise to cognition and behavior? In his own lab, Bucci focuses his studies on the brain mechanisms underlying learning, memory, and attention. Here’s what the award-winning researcher has to say about the nature of information processing, how to grow new brain cells, and what makes a person a person.

Can you describe a project you’re working on now?One that’s really exciting is trying to figure out why adolescents are so impulsive—I don’t have one yet, but I’m trying to figure it out before I do. [Laughs.] Although understanding how we learn to emit a response is important, it is equally important to understand how we learn to inhibit a response when it is inappropriate. That’s where the adolescent has a problem. In fact, they’ll say, “I know I’m not supposed to do that, but I did it anyway.” The adolescent brain is still developing, so there’s this theory that two systems are out of balance: the nucleus accumbens, which is very interested in reward seeking and is getting stronger; and the prefrontal cortex, which is involved in controlling behavior but lags behind in development.

So how do you test activity/interactivity in specific areas of the brain?The vast majority of our research is in rats because we can do manipulations that you simply can’t do in a human. Recently, we’ve used an engineered virus to introduce the DNA for a fake chemical receptor in the rat’s brain. So for about two hours, while the drug lasts you can stimulate that receptor and either make the cells more active than usual or silence them to see what the effects are on behavior.

Your research also focuses on exercise. What are some of your findings?It’s been documented that we have new neurons being born in our hippocampus, and you get this surge of even more new brain cells from physical exercise. Other effects include increasing growth factors in the brain that help neurons survive and form those 10,000 connections. A couple of other fun, anecdotal things: It turns out that voluntary exercise has better effects on the brain than forced exercise; and exercising socially is much better for brain function than exercising by yourself.

What about exercise as it relates to your specific areas of interest: attention and learning.We just got done with a six-year grant to see if exercise could help with attention deficits in ADHD, and impulsivity issues that don’t rely on the hippocampus. We have a type of rat that exhibits ADHD-like behaviors and, importantly, similar neurobiology in terms of different brain wiring and chemical levels. We found that exercise normalized attentional behavior and their social behavior. Of course, we’re not looking at talking in rats, but we’re looking at social contact and interaction. Exercise normalizes, or ameliorates, some of these neurobiological problems, and it does so just as well as Ritalin.

Fifty years from now, what would you like so see result from research in your field?I would love to be able to intervene for Alzheimer’s or ALS. In Alzheimer’s, brain cells are getting gummed up with debris, plaque, and they’re dying. Can we introduce cells that grow anew, neurogenesis? In ALS, motor neurons are dysfunctional. Can we introduce healthy ones? But there’s that word introduce. Inject. Embryos. Manipulate cells in the brain. These things push people’s buttons. But I certainly think that for clinical situations where there’s early undue suffering, I would want to use these techniques to help intervene.

You teach a small advanced seminar for senior neuroscience majors, but you also insist on teaching the big intro to neuroscience class. Why?I love watching students’ reactions—Oh my God. This is how my brain works. This realization that something as fundamental, as simple, as ions flowing in electrical waves of energy is what gives rise, seemingly, to perception, to emotions, to feelings. At first, students are like, why the hell are we studying electricity? Then, as the class moves along they realize, holy cow, now I’m studying anxiety disorders; this is related to abnormal ion flow in the amygdala. I bring in a human brain and they pass it around— they realize that they are holding this glob of gray stuff, and that’s what does all these cool things that helped them eat their breakfast and call their boyfriend or girlfriend a couple of hours ago.

But if behavior is dictated by electricity and brain cells, then what makes a person a person? Say, a Yankees fan, or someone who loves the ocean and downhill skiing, such as yourself.That’s a great question. Nerve cells that have the unique property of being able to use changes in electric current as a signal from one to the other, but how does that manifest in the memory of your favorite ice cream, which you could probably taste right now if you thought about it; or the image of a grandmother; or the feeling of love or hate? How do you make that huge leap from what is undoubtedly electrical activity to these perceptions? You could say we’re going to figure this out. Or you could say that’s where you have to bring to bear divine intervention. Personally, I’m a faithful person and I’m a scientist. For many, many years I fought a battle in my own brain about how these two things go together.

Can you talk more about that struggle to reconcile religion and science?Did you ever watch a movie where at the end they tell you how the movie was made? I remember this in Titanic. It turns out they had this little model boat in a tub. It ruins the magic. So one of the struggles I have is: Do I want to know, really, how electricity and brain cells turn into perceptions and love? Will it demystify it—Oh, yeah. It’s a bunch of ions. And then there’s the more existential issue: What are we as humans, and how do we differ from other animals? Can they experience emotion like we do? I think they probably do. Is it exactly the same? Probably not. But where do we fit in the greater scheme of living organisms?

You’re married with three young kids. When you feel a rush of love for your family, do you ever suddenly think about the mechanics of your own brain—seeing your emotions in terms of electrical activity?Nah, I’d say almost never. There’s a boundary.