Matthew Slaughter Named Next Dean of Tuck School of Business

Matthew J. Slaughter, the Signal Companies’ Professor of Management and associate dean for faculty at the Tuck School of Business, has been named the school’s 10th dean, Dartmouth announced today. A scholar of international economics and an expert in globalization, Slaughter is a renowned academic who has held several key leadership roles at Tuck since joining the faculty in 2002. He will assume his new role on July 1. 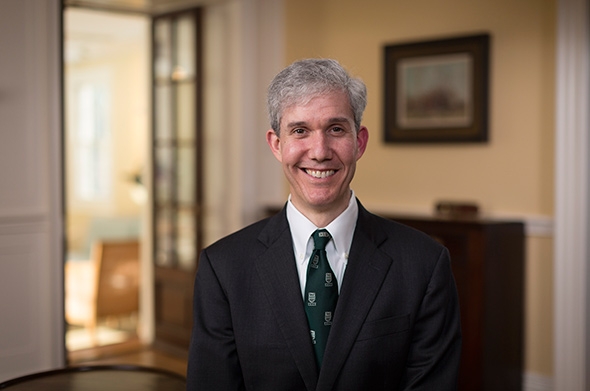 “Tuck and Dartmouth have been my professional home since graduate school, and I am honored and humbled by this opportunity,” says Matthew Slaughter, the next dean of the business school. (Photo by Johannes Kroemer)

“I am thrilled Matt has agreed to lead Tuck at this important moment in its history,” says Dartmouth President Phil Hanlon ’77. “Matt embodies all that is great about Tuck. He is a committed scholar-educator with a global outlook and deep connections to the worlds of policy and practice. He cares deeply about Tuck’s distinctive values and traditions, its close-knit community, spirit of innovation, and culture of diversity. I look forward to working closely with him in his new role.”

Currently associate dean for faculty and founding faculty director of Tuck’s Center for Global Business and Government, Slaughter previously served as associate dean of the MBA program. From 2005 to 2007, he served on the Council of Economic Advisers in the Executive Office of the President of the United States.

Slaughter succeeds Dean Paul Danos, who announced in March he would not seek reappointment at the end of his fifth term in June 2015.

“I am delighted Matt will become our new dean,” says Danos. “Matt is a superb scholar and a gifted teacher, and Tuck is indeed fortunate to welcome a leader of his accomplishments and thorough knowledge and appreciation of Tuck’s traditions and operations. I have every confidence Matt will lead Tuck to new levels of excellence and distinction.”

“Matt is a leading voice in the world of international economics and a talented leader,” says Provost Carolyn Dever. “He will bring exceptional skill, intelligence, and creativity to the deanship. Matt has a perspective on the world informed through decades of scholarship and service that will benefit Tuck in the years to come.”

Slaughter is eagerly looking forward to his new role. “Tuck and Dartmouth have been my professional home since graduate school, and I am honored and humbled by this opportunity,” he says. “Tuck is a wonderful school that since its founding has evolved in creative and innovative ways to address the world’s challenges and opportunities. Building on Tuck’s many strengths, I look forward to working with faculty, students, staff, and alumni to craft a compelling vision for the future that will enable Tuck and its graduates to thrive in our ever-changing world.” 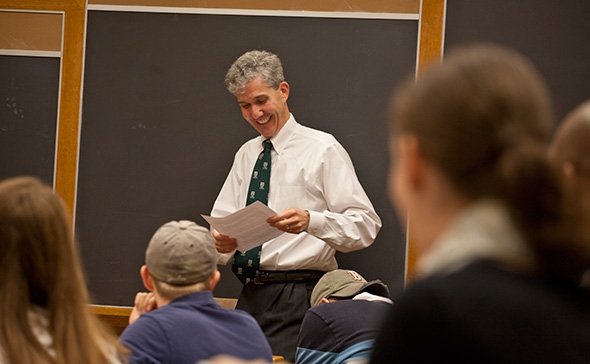 Professor Slaughter is regarded as a passionate and innovative teacher, and his courses are among the most popular at Tuck. (Photo by Laura DeCapua)

Slaughter’s selection followed a comprehensive, eight-month search conducted by a 10-member search committee chaired by Tuck Senior Associate Dean and Professor Robert Hansen. The committee engaged in a process of broad outreach to students, faculty, staff, and alumni, and partnered with the executive-placement firm Spencer Stuart. After a thorough review of a deep pool of dynamic candidates from around the world, the committee identified several finalists from which President Hanlon and Provost Dever made their selection.

“The opportunity to lead a school like Tuck is a rare one, and this was reflected in the strength of our pool and the exceptional candidates we put forward for consideration,” says Hansen. “Matt is uniquely qualified to build on Tuck’s strengths to ensure the school maintains its place among the very best business schools worldwide. With his commitment to excellence, strong appreciation for the qualities that set Tuck apart, and care he has for our community, I am confident Tuck has found the right person to lead us in its exciting next chapter.”

Slaughter is regarded as a passionate and innovative teacher, and his courses are among the most popular at Tuck. He is a past recipient of both the Class of 2011 Teaching Excellence Award, which recognizes faculty for their outstanding contributions to the educational experience at Tuck, and Dartmouth’s John M. Manley Huntington Teaching Award, which Slaughter received in 2001 as a member of Dartmouth’s economics faculty.

Slaughter is a research associate at the National Bureau of Economic Research; an adjunct senior fellow at the Council on Foreign Relations; a member of the advisory committee of the Export-Import Bank of the United States; and a member of the academic advisory board of the International Tax Policy Forum.

From 2005 to 2007, Slaughter served as a member of the Council of Economic Advisers in the Executive Office of the President of the United States. In this Senate-confirmed position he counseled the president, the Cabinet, and others on issues including international trade, currency and energy markets, and the competitiveness of the U.S. economy. Slaughter frequently testifies before Congress, while also working with leaders of both parties.

Slaughter’s area of expertise is the economics and politics of globalization. His recent work has focused on policy responses to the global financial crisis; the global operations of multinational firms; and the labor-market impacts of international trade, investment, and immigration. Slaughter has authored dozens of articles in peer-reviewed journals and is a frequent op-ed contributor to The Financial Times, The New York Times, The Wall Street Journal, and The Washington Post. He has co-authored three books, including The Squam Lake Report: Fixing the Financial System and Globalization and the Perceptions of the American Workers.

Slaughter lives in Hanover, N.H., with his wife, Lindsey, and their sons, Nicholas and Jacob.

Description
Director of Creative Writing Peter Orner’s Still No Word From You: Notes in the Margin gets a short review, which calls him “a highly lauded author whose writing, in both fiction and nonfiction, is an act of wizardry.”
The New York Times
Videos