Michael Chaney on Heeding the ‘Unfortunate Tug of History’ 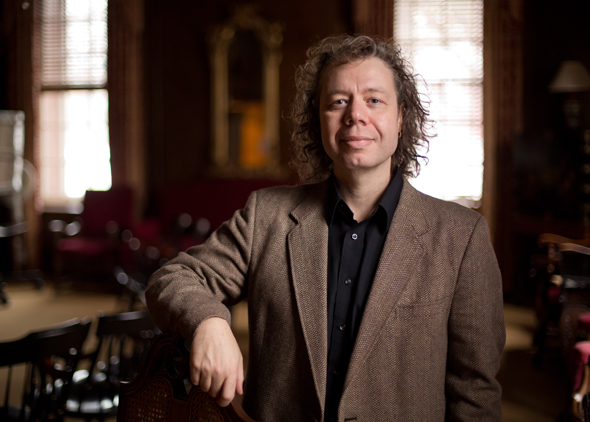 Associate Professor Michael Chaney says he chose to focus on 19th-century African-American literature because he was “drawn to the complex issues of race in a painful time in our history.” (Photo by Rob Strong ’04)

Associate Professor of English Michael Chaney’s personal history drives his fascination with 19th-century American and African American literature and culture and what it can teach us about our history, culture, and contemporary racial identities. With an artist’s eye, he seeks out the “anarchic, ungovernable” spaces between visual and literary cultures to find hidden meanings and uncomfortable truths.

What was your early life like, and how did it shape your interests and your life?I have a unique family background. My mother was what they called a mischlingskind—a mixed-race child, an occupation baby. My grandfather was a black American GI and my grandmother was a peasant woman, and so my mother was born as the only brown-skinned girl in her town in Germany. Her urge to come to America at age 19 was in part an effort to reconnect with her father.

My father was an American soldier as well, but he and my mother didn’t stay together long. I was 6 when she got re-married to a black man. We lived in Cleveland Heights, Ohio, where my grandfather was living with another white woman he had married. The town experienced a great deal of 20th-century tolerance toward mixed-race families, so I did not feel alone or strange in claiming the kind of racial position and mixed-race family that I came from. My mother’s post-war sense of German identity and racial inheritance was problematic for her, and she had to develop a complex racial identity that she would pass on to me and my brother. I feel I’ve been a theorist of race since about age 6.

How did Cleveland Heights come to be that way?Cleveland has a unique history, like rust-belt towns such as Pittsburgh or Buffalo. The suburbs formed ethnic enclaves around city centers, with tacit agreements that Italians would live here, Poles there, and interracial families in Cleveland Heights. It was a strange pocket of cosmopolitanism and diversity, built around the steel and rubber factories in Akron, then the rubber capital of the world. It was a throbbing, vibrant part of the American experience that doesn’t exist now.

When did you decide to become a professor?I always knew I wanted to be a professor, and initially I wanted to study philosophy or history. My English professor was the first to talk to me about evidence, standards of rhetoric, and truth in our papers and essays in a way that was so self-reflexive and clear that I thought an English major would be like majoring in thinking. I could know how to make knowledge per se, and how other disciplines create knowledge. The focus would be on what we do with words and stories and how we build identities around that.

You are a painter as well.My mother studied art in Germany and had extensive training in drawing and sketching and working with materials, and she exposed my brother and me to art-making techniques at a young age, in the German way. We were shown materials and techniques and expected to use them and care about what we were doing. When it came time to make our own money and pay rent, it made sense to try to do it making art. My brother and I started an artist collective and got jobs painting murals, and we involved our friends. I was studying at Miami University but took four years off to focus on painting.

How did you move from painting to the study of literature?I missed the classroom and found myself talking about books as I worked on murals on 40-foot ladders and suspended from ceilings. I started to take courses and publish essays, and then I applied to grad school and found that I would be paid more as a PhD student, with less physical labor. I did what I had to do to live a little farther from the poverty line.

Why did you choose to focus on 19th-century African-American literature?I was drawn to the complex issues of race in a painful time in our history. Nineteenth-century literature arose amid this fallen state of slavery, and slave narratives were seen as a corrupt body of literary work, propaganda authored by abolitionists and thus “unusable history.” So it was a field of literature with overly determined ways of thinking and talking. I wanted to move beyond that.

What drew you to Dartmouth?After finishing my dissertation, I had a good year of publishing, and Dartmouth was among the schools to offer me a job. I loved the place from the beginning. In addition to holding out the possibility of working alongside world-class faculty and the brightest students anywhere, Dartmouth was a dream-come-true in terms of location. Dartmouth continues to impress and humble me with its natural beauty. These vistas full of February and pine, would put anyone in a lyric state of mind, making anyone feel the way John Keats does upon seeing the Elgin marbles—as though standing in the “shadow of a magnitude.”

You often write about a slave known as Dave the Potter, and you teach a class on him.  Why is his story so compelling for you?I don’t think I’ve ever encountered a figure in history more fascinating. Here’s a man who finds the means and skills to publish his thoughts to the world in one of the most repressive parts of the South where slavery plays out. He signs his pots with the single word, Dave, and writes cryptic little poems on them.

The speculation is that Dave learned to write by setting letterpress type, so in my class, the students learn to set type on a letterpress and to make pots and write their own thoughts on them. They immediately begin to wrestle with the 19th-century world that Dave lived in.

You’ve written about the “tragic narratives” of mixed-race children of slaves and slave owners. President Obama had a black father and white mother, and yet he isn’t seen as mixed race, and he describes himself as black.It goes back to the claims of race. Mixed race is a category that forces us to examine the prime category of race and our response to it, and our belief in the concept of monoculture. So one drop of black blood makes a white person black, and yet a thousand drops of white blood will not save a black person from the historical and cultural legacy of blackness, which in the time of slavery was quite overt. The child shall follow the condition of the mother, for very good reason. If these mixed-race children were to follow the condition of the father, the labor population would be creating a new population that is free. This is mythology.

But these myths carry on.Yes. Myths have greater traction in a culture that engages in ritual practices of amnesia. Our culture’s rampant commodities of excess communication perpetuate a kind of amnesia of race. And yet these uncomfortable histories lurk in our contemporary culture, disconnected from their historical roots. These myths continue to bind us, whether or not we claim them.

This is why I feel compelled as an academic and as a humanist to heed the unfortunate tug of history. No matter what we decide to change in terms of laws and policies, we are a society tied to the history that happened here—in this place—and needs to be reconciled.