Dartmouth Announces Tuition, Room and Board, and Fees

In a series of wide-ranging conversations at its March 6 and 7 meeting, the Dartmouth Board of Trustees discussed the acceleration of academic innovation and planning as well as financial support to facilitate those efforts. Board members also received updates from College officers from across the institution. 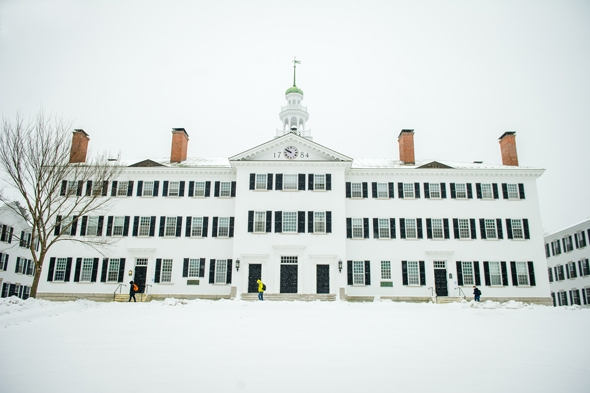 The Board of Trustees at its March 6 and 7 meeting discussed academic planning with College officials. (Photo by Jeff Woodward)

The board heard a presentation from Provost Carolyn Dever about how Dartmouth is strengthening academic excellence. Dever described the excitement and interest in the faculty cluster initiative, which has received 33 proposals for funding in next year’s second year of the program. The initiative is designed to extend Dartmouth’s impact in the world through the collaboration of interdisciplinary faculty teams on issues of global importance. Dever also noted that the College’s seed-funding initiative, which encourages innovation by offering resources for new scholarship and research, has drawn an increased number of proposals this year.

“The competition for the very best faculty, and those with the potential to become leaders in their field, is fierce,” says Dever. “We will be strategic, creative, and relentless as we work to attract and retain a strong, diverse faculty today and build Dartmouth’s next generation of exceptional teacher-scholars for tomorrow.”

Dever provided an update on the development of programs and partnerships to build faculty diversity, which are gaining steam under the direction of new Vice Provost for Academic Initiatives Denise Anthony. The trustees also received an update on the Society of Fellows, a cohort of young post-doctoral scholars whose presence on campus, beginning next fall, will foster a new level of intellectual energy, interdisciplinary collaboration, and integration of research and teaching excellence.

The trustees also met with Matthew Slaughter, the incoming dean of the Tuck School of Business who is currently the Signal Companies’ Professor of Management and associate dean for faculty at Tuck. A scholar of international economics and an expert in globalization, Slaughter is a renowned academic who has held several leadership roles at Tuck since joining the faculty in 2002. He will assume his new role on July 1, and says he looks forward to working with the faculty, students, staff, and alumni, as well as the board, to craft a compelling vision for the future that will enable Tuck and its graduates to continue to thrive and succeed.

The trustees approved a 2.9 percent increase in undergraduate tuition, mandatory fees, and room and board for the 2015–16 academic year, consistent with the strategy launched last year by President Hanlon to slow the growth of the cost of a Dartmouth education.

The decision follows a budget process that prioritizes robust investment in innovation and excellence as well as support for Dartmouth’s most important academic priorities. The increase is the same as last year’s 2.9 percent increase, the lowest in nearly four decades.

“The board’s actions today reinforce our strategy to develop a budget designed to achieve Dartmouth’s aspirations as a world-class educational institution and then generate operating revenue to meet those expenses, as opposed to seeing how much revenue we can generate and then setting the expense budget accordingly,” says Hanlon.

The trustees reaffirmed their commitment to affordability through the continuation of Dartmouth’s long-standing need-blind undergraduate admission and generous need-based financial aid program. For the 2016 fiscal year, which begins on July 1, Dartmouth has budgeted $88.9 million in financial aid, a 6.6 percent increase over the $85 million in awards budgeted for the current fiscal year. Since 2007, Dartmouth has increased scholarship awards by 68 percent.

“I applaud the board for its commitment to maintaining a need-based financial aid program that guarantees meeting 100 percent of eligible students’ demonstrated need for all four years,” says Maria Laskaris ’84, dean of admissions and financial aid. “This is key to Dartmouth’s ability to enroll exceptionally talented students from increasingly diverse backgrounds.”

Board members voted to approve Dartmouth’s 2016 fiscal year operating budget of $1 billion. In addition, they approved a capital budget of $50 million to fund a number of projects, including:

The Hood project, which will provide new gallery space, technologically advanced learning facilities, and increased access to the collection for students and faculty, is being coordinated with a Hopkins Center for the Arts planning study in an effort to promote both physical and programmatic efficiencies and to enhance the Arts and Innovation District.

Hanlon gave board members an update on the implementation of his Moving Dartmouth Forward Plan and discussed ideas and configurations for a new house model for residential life.

Following a successful trustee-student dinner in November, the board has continued its practice of meeting with students to discuss ways to maintain the excellence of the classroom experience and campus life. More than 60 students joined 20 trustees on Friday for informal discussion and dinner. Trustees also had the opportunity to attend that evening’s Dartmouth Idol finals.