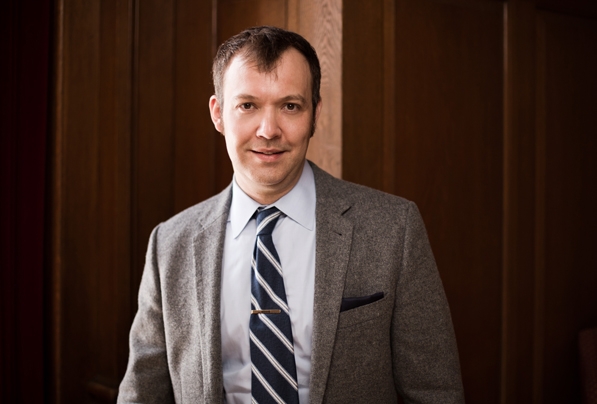 Associate Professor of History George R. Trumbull IV says North Africa is “a part of the world that enabled me to combine a lot of different intellectual interests in a place that I really, really love.” (Photo by Rob Strong ’04)

Mystical practices in late 19th-century Algeria. A global history of pirates. The struggle over water in the Sahara. These are just a few of the subjects George R. Trumbull IV, an associate professor of history, addresses in his scholarship and teaching. Trumbull, who has published extensively on politics and religion in North Africa, shares some thoughts on reading, writing, and Arabic.

Much of your scholarship focuses on North Africa. Why this part of the world?
I had spoken French from a young age and wanted another language. Arabic was a good match, so I started taking it my first year in college and fell in love with the language. That’s really what got me excited. There’s an almost mathematical precision to its grammar, and I enjoyed using that part of my brain. Then I went over to North Africa; it’s a part of the world that enabled me to combine a lot of different intellectual interests in a place that I really, really love.

Tunisia was the one country touted as an Arab Spring success. Does the March 18 attack at the Bardo National Museum in Tunis suggest that Islamic extremists are gaining a foothold?
The attack demonstrates the extent to which the “successes” of Tunisia’s transition to democracy excluded certain elements of society. Economic development—and access to social mobility, employment, and education—remain geographically and socially discontinuous; participatory elections have not alleviated social ills at the margins of Tunisian society. While some Tunisians have invested much energy into forming political parties, into elections, into political debate, others are struggling to make their voices heard, or even to survive. At the same time, hard-core, committed extremists both reject the basic premise of participatory government and actively recruit among those most marginalized in Tunisia.

What drew you to the subject of the book you’re currently researching, a history of water in the Sahara?
I became fascinated with what happens when people live lives clearly delineated by scarce resources. The Sahara in particular drew me because the people who live there have a different knowledge and experience of the desert. I’m interested in how that knowledge has survived and enabled continuity for communities, but also the ways in which contemporary borders have largely ignored that knowledge, to the detriment of nomadic peoples and stability in the region more broadly.

Your popular course on pirates separates fact from fiction.
We tend to think of pirates through the lens of romance, but piracy represents a complicated intersection of political, social, and economic history, whether that’s off the coast of Ireland in the 15th century or off the coast of Somalia now. As for myths, pirates didn’t wear large boots or make people walk the plank, whereas having a parrot on the shoulder or having a hook, those more closely match the experience. Pirates often traded in rare animals, and a pirate who lost a hand might still serve the ship because of his valuable knowledge.

What’s the most important thing history can teach us?
The unfolding of history relies on a series of decisions and contingencies and, at times, accidents and unexpected consequences that arise out of even the best intentions. History enables a deeper understanding of what the present is by showing us how change happens over the long run, and through that understanding it reveals possibilities of different futures.

What’s one of your favorite places?
The city of Meknes in Morocco, which underwent a massive remaking of urban life in the 18th century. The main square is known as the Sahat El Hadim, the place of destruction; 30,000 people died there. It’s a beautiful old city, but haunting. You see the marks of where it has been completely rebuilt, in large part by slaves taken through the Barbary Corsair pirate trade.

You taught at Yale, Tulane, and NYU before coming to Dartmouth in 2008. What attracted you to Dartmouth?
The idea of working in a place that equally values my work as a writer, researcher, and teacher. The questions my students most frequently ask me are about my writing. They value the fact we’re producing knowledge together, and they are vested in the work I do inside and outside the classroom.

In certain academic and political circles, there’s a sense that the liberal arts are under siege, as you put it. What is your response?
The value of a liberal arts education is not in salaries right out of college; it’s in the kind of life a person can lead, and the richness a person can have in relating to and understanding the world. It’s interesting — when you talk to Dartmouth students, they have a clear sense of why they’re here. It makes me think we’re listening to the wrong people. If we want to have a conversation about the value of liberal arts, the first people we should ask are those who have committed four years of their lives to doing this.

What keeps you busy when you’re not working?
I love to cook. There’s something really enjoyable about planning and cooking a large meal, even if it’s just for yourself. I also love to sit down with a book. I curate my shelves much better now. There are definitely books I read on my iPad and think, I want this as a hardcover in my own library.

What are you currently reading?
Anne Applebaum’s Gulag: A History, which isn’t exactly uplifting but it’s been on my list for a while. She’s an incredible writer.