The Hopkins Center for the Arts hosts The Nile Project (TNP), a musical ensemble that draws on the traditions of the Nile Basin, and anchors environmental and political advocacy in their artistic collaboration. TNP’s residency at the Hop aims to foster understanding of the local water system, centered on the Upper Valley’s Connecticut River. 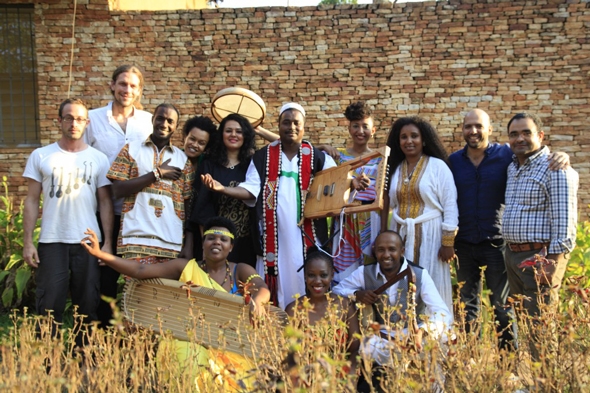 The Nile Project presents the full version of its concert Friday, April 17, at 8 p.m. in Spaulding Auditorium, followed by a post-performance discussion with the artists. A shorter family matinee version will be presented in Spaulding at 2 p.m. Tickets for these performances are available though the Hopkins Center box office. River Songs, a HopStop adaptation of TNP’s show, will be presented twice on Saturday, April 18: at 11 a.m. in the Hopkins Center’s Alumni Hall, and at 3 p.m. in the Claremont Savings Bank Community Center in Claremont, N.H. HopStop performances are free and open to the public.

On Thursday, April 16, members of the Nile Project are the featured presenters for a Sustainability Solutions Café, starting at 12:30 p.m. in the Paganucci Lounge, Class of 1953 Commons. Additionally, the Hood Museum presents Water Ways: Tension and Flow, an exhibition drawn from the Hood’s permanent collection, on display through Aug. 23.

Thursday, April 16: The Center for Digital Strategies presents “Delivering the Digital Infrastructure: Complex Connections in the Hyperweb World,” a panel discussion featuring visiting executives from Facebook, Citrix, NetNumber, and AT&T. The event begins at noon in the Frantz II classroom of the Tuck Schools’ Raether Hall.

Thursday, April 16: Tanya Luhrmann, Watkins University Professor in the Anthropology Department at Stanford University, presents the 2015 James and David Orr Lecture on Culture and Religion. Her talk, “Invisible Others: How People Experience the Same God Differently in Ghana, India, and the US,” begins at 4:15 p.m. in the Hood Auditorium and will be followed by a reception in the Hood Museum’s Kim Gallery.

Thursday, April 16: Student finalists compete for Benjamin F. Barge and Class of 1866 Prizes for Oratory, presenting their original persuasive speeches to the gathered public and a panel of judges in the Treasure Room of Baker Library. The competition begins at 4:30 p.m., followed by a reception.

Thursday, April 16: Author and performance poet Cristin O’Keefe Aptowicz speaks on “Dr. Mütter’s Marvels: Thomas Dent Mütter and His Fight to Bring Humanity into 19th Century Medicine,” at 4:30 p.m. in the Filene Auditorium at Moore Hall. Her talk is sponsored by the Dartmouth College Ethics Institute.

Friday, April 17: GRID, the Gender Research Institute at Dartmouth, presents the first event of its Spring 2015 series, “Just Words: Free Speech and Social Change”: a lecture by Kimberlé Crenshaw, a professor of law at the UCLA and Columbia law schools. Crenshaw speaks at 3:30 p.m. in Filene Auditorium at Moore Hall. The second event in the series, with Brittney Cooper, assistant professor of women’s and gender studies and Africana studies at Rutgers University, takes place at 5 p.m. in Filene Hall on Wednesday, April 22.

Friday, April 17: Bernard Balleine, Professor of Brain and Mind Research Institute at the University of Sydney, gives the Leaton Lecture for the Department of Psychological and Brain Sciences at 4 p.m. in Room B03 at Moore Hall. Balleine’s talk is titled “Reward, Reinforcement and the Neural Bases of Decision-making.”

Monday, April 20: Thayer School of Engineering presents a special seminar by Felix Creutzig, of the Mercator Research Institute on Global Commons and Climate Change in Berlin, “Sustainability at the Nexus of Land Use and Energy.” Creutzig’s talk begins at 4 p.m. in Cummings 200.

Monday, April 20: RSVPs are requested for the Office of Sustainability’s “Sustainability and Social Justice Dinner,” a facilitated discussion on the intersections of sustainability, inclusivity, community, justice, and stewardship. The event begins at 6:30 p.m. in the Hanover Inn Ballroom.

Tuesday, April 21: Montgomery Fellow Bernardine Evaristo gives the public lecture of her fellowship tenure, “On Becoming a Writer,” at 4:30 p.m. in Haldeman 41 in the Kreindler Conference Hall. Evaristo is the author of seven books of fiction and verse fiction including Lara, The Emperor’s Babe, Blonde Roots, and Mr Loverman.

Tuesday, April 21: Director Abderrahmane Sissako receives the 2015 Dartmouth Film Award at ceremony beginning at 7 p.m. in the Loew Auditorium at the Black Family Visual Arts Center. The event includes a screening of Timbuktu, his latest film, and a post-film conversation with Sissako and Ayo Coly, associate professor of comparative literature and African and African American studies.

Wednesday, April 22: The eighth annual Dartmouth Integrative Biology Symposium, held 8 a.m. to 6 p.m. in the Hopkins Center’s Alumni Hall, focuses on epigenetics. A poster session in the Top of the Hop, from 5 to 7 p.m. on Tuesday, April 21, opens the conference.

Wednesday, April 22: In conjunction with the Hood Museum of Art’s exhibition Auto-Graphics, artist Victor Ekpuk will create a site-specific work in the museum’s Lathrop Gallery, over the course of the day.

Wednesday, April 22: In honor of Global Health Day, the Dickey Center’s Global Health Initiative presents a symposium with a keynote by Keith Martin, executive director of the Consortium of Universities in Global Health. Martin’s talk, at 5 p.m. in Haldeman 41 in the Kreindler Conf