Yuliya Komska on Teaching German and Other Joys 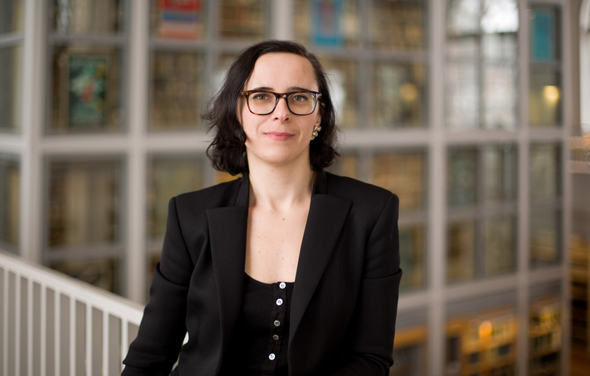 Dartmouth’s Department of German Studies is “one of the strongest German departments in the country. It’s interdisciplinary in the best possible way,” says Assistant Professor Yuliya Komska. (Photo by Rob Strong ’04)

Yuliya Komska is an assistant professor of German studies, a Cold War cultural historian, and a self-proclaimed “wannabe Austro-Hungarian.” A native of Ukraine, Komska recently published her first book, The Icon Curtain: The Cold War’s Quiet Border. She shares her views on belonging, her joy in teaching, and the difference between her and the futuristic mom in the 1960s cartoon show The Jetsons.

You describe your hometown of Lviv as beautiful, but say that you never felt quite at home there. Why is that?
Growing up, I always had the sense we were inhabiting someone else’s house, and in many ways it was true. After World War II, Poles were forced to leave Ukraine, and Soviets moved in. My grandfather, a Jew from Kiev, was in the Russian military, and ended up being sent to Lviv. He got a two-room apartment in a villa said to have belonged to the former governor, a Pole. So I felt that, yes, this is where I was born, but I live in the place that I know is expropriated, because digging around in the garden I would find quaint old bottles with a Polish or German font.

Your new book is about the border between Czechoslovakia and West Germany. In tweeting about it, you referred to “the German wall that didn’t fall.” Can you elaborate?
This border is the second oldest on the European continent; the Iron Curtain was grafted onto it. And west of it, civilians kept making their own additions to the military fortifications—monuments, churches, lookout towers. The place has a lot of layers. The Cold War wasn’t the beginning. The traces of the Cold War, and the centuries before that, are still present in the landscape and its lore—chapels, legends, poems, religious images. Those have not gone anywhere. I really wanted to hammer that point home.

Since Russian is your native language, why are you teaching German?
First, I grew up in a place rife with adulation for all things Austro-Hungarian. Second, I’m half Jewish, and I think a lot of Soviet Jews had this indestructible love for German culture, a very old-fashioned definition of German culture, associated with great thinkers and poets. The fascination has always been there for me—reading the books on our shelves in translation, for starters.

What’s your experience as a language professor at Dartmouth?
It’s like play time. [Laughs.] I love teaching German, and languages in general, because people are willing to put down their guard. When you come to a language that’s new, everything is flexible. It still seems like you can invest a meaning or emotion in a word—or not. I think that frees us up for being, not childish, but more childlike in the classroom. Also, this is one of the strongest German departments in the country. It’s interdisciplinary in the best possible way. We have colleagues who work in all sorts of directions. Plus, we’re known as one of the nicest departments on campus.

In your resume, you list “belonging” as one of your professional interests.
Until I had kids, I had no interest in belonging. I grew up in a family of intellectuals who wanted to be cosmopolitan. Belonging was connected to being narrow-minded, nationalistic, or parochial. So not being anchored to one place was actually a cool thing, counter-cultural. When I went to college in the States, I missed my parents, but I never missed home like some students around me, so I became very interested in people who were obsessed with belonging.

Speaking of college, you went to Colby College in Maine, yes? How did that happen?
There’s an organization in Ukraine to help students learn about education in America: how to apply, what to do to get financial aid. A lot of it boiled down to writing a personal statement, because learning to talk oneself up wasn’t part of Soviet education. So I applied to about 20 American schools without knowing anything about them, other than they potentially gave financial aid to foreign students. In the meantime, I translated a manuscript written by a Jewish survivor so that his rescuer, a Ukrainian lady in my hometown, could read it, and made $200, and that’s how I financed my correspondence.

Let’s talk about the book you’re working on now, Transcontinental and Transatlantic: Radio Free Europe in the Golden Age of Television.
Around 1950, when Radio Free Europe (RFE, for short)—a western broadcaster across the Iron Curtain—was born, Americans dreamed about TVs. They didn’t see a future for radio. Yet RFE was advertised as private (falsely, as it turned out) and depended on their support. In effect, they were asked to donate money to an aging medium with hugely expensive technologies needed to circumnavigate jamming by the Soviet Union. So how does the station deal with this huge obstacle of being born in the wrong medium’s age? That’s what I ask; it’s the question that keeps popping up in the 21st century.

Your son is 9 and your daughter 6. What is a family weekend like?
We’re real homebodies; my kids are mini-me’s. I love looking at art with them, getting ideas for crafts. Surrealism is a big thing now. We look at books and watch movies. I’ve introduced them to a bunch of Cold War cartoons: The Jetsons and Rocky and Bullwinkle. They love watching those. I had to explain that these are from a long time ago. Things have changed, including gender roles. “Do you notice anything?” I say. “Mama works.”