Three alumni and their families have made gifts totaling $5 million to endow three head coaching positions at the College.

With these three gifts—supporting men’s soccer, women’s tennis, and men’s Nordic skiing—Dartmouth is $3.5 million away from its goal to raise $20 million in permanently endowed coaching positions to increase the school’s ability to attract and keep the best coaches and athletes in the Ivy League. 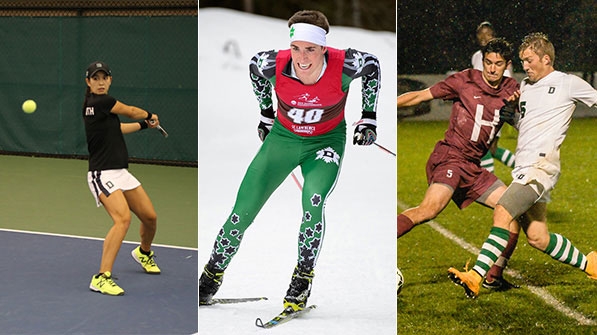 The three gifts, one of them from an alumnus who has chosen to remain anonymous, come from longtime supporters of the school:

The generosity of these donors supports the goal of President Phil Hanlon ’77 to educate students to be leaders who possess the knowledge, critical thinking skills, and perseverance to take on many of the world’s great challenges.

“These extraordinary alumni donors and their families deeply appreciate how athletic competition develops our students’ leadership skills and how coaches, who are teachers and mentors to our students on and off the field, can have a tremendously positive effect on their lives,” says President Hanlon. “On behalf of the Dartmouth community, I want to thank these alumni and their families for investing in our students, our coaches, and the entire Athletics program, which plays such a vital role in building community at our College.”

“Gifts such as these are powerful, both symbolically and practically,” says Sheehy. “First, it’s an unbelievable show of faith in what we’re doing here, and that’s a real morale booster. Second, the income that spins back to us is a difference maker. My athletic budget is approximately $23 million, with more than a third of that coming from endowed funds and annual giving. From a competitive standpoint, endowed funds are critically important.”

Lemkau is co-head of Global Mergers & Acquisitions for Goldman Sachs. Prior to his current role, he headed Mergers & Acquisitions for EMEA and Asia-Pacific; co-headed the Technology, Media and Telecom Group; and was chief operating officer of the Investment Banking Division. He joined Goldman Sachs in 1994, was named a managing director in 2001, and became a partner in 2002. Lemkau serves on the board of directors for Grassroot Soccer, a nonprofit organization that uses soccer to combat the spread of HIV and AIDS in Africa.

Lemkau played Big Green soccer during the tenure of the Scottish-born Bobby Clark, who appeared in more than 400 games for Aberdeen F.C. before coming to the U.S. Clark coached at Dartmouth from 1985 to 1993, leading the team to three Ivy League titles and four consecutive seasons ranked in the top 10 nationally. He left Dartmouth to coach the New Zealand national team, and for the past 14 years he has coached the men’s team at Notre Dame, winning a national championship in 2013.  His son, Tommy Clark ’92 Med ’01, founded Grassroot Soccer.

Boss is chairman emeritus of the Rhode Island-based A.T. Cross Company. Over the course of more than five decades, he has held several positions with the prestigious pen and watch manufacturer, including executive vice president, president, chief executive officer, and chairman. He and his wife were the lead donors of the Alexis Boss Tennis Center, named in memory of their daughter Alexis Boss ’93, a five-time All-Ivy tennis player at Dartmouth.

A member of the Dartmouth sailing team as an undergraduate, Boss is president of the Narragansett Bay Yachting Association and vice chairman of the board at Rhode Island Hospital. He has served as a director of the National Tennis Foundation and Hall of Fame, president of the Rocky Hill School and treasurer of the Moses Brown School. Marjorie Boss was chair of the board of trustees at the Lincoln School in Providence and serves as trustee of the Russell A. Boss Family Foundation.

All three teams supported by these new endowments will be able to use their funds to build on recent success:

In addition, the Holekamp Family Coach of Strength and Conditioning was endowed by a gift from Kerry and William Holekamp ’70.

Dartmouth offers 34 varsity sports—soon to be 35 with the addition of women’s rugby. More than 1,000 undergraduates participate in nearly 700 intercollegiate contests each year, and more than 75 percent of all Dartmouth students are involved in a sport or fitness activity.