William Cheng on the Difference Between Sound and Music 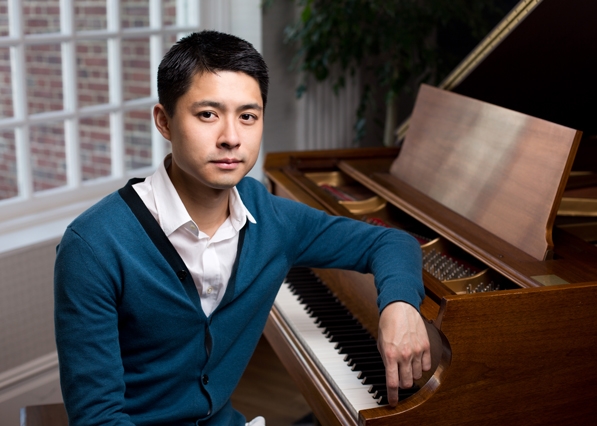 “I’ve come across challenges in teaching students how to write about music with a mix of technical precision and personal flair,” says Assistant Professor of Music William Cheng. (Photo by Rob Strong ’04)

Assistant Professor of Music William Cheng is particularly interested in sound, media, technology, identity, and politics. His first book, Sound Play, Video Games and the Musical Imagination, was published in 2014 by Oxford University Press. Cheng, who joined the Dartmouth faculty this year, talks to Dartmouth Now about musicology, the cultural value of video games, the nature of sound, and the sound of nature.

“The term musicologist,” you wrote, “often elicits courteous yet uncertain nods from new acquaintances.” Does musicology suffer from an inferiority complex?
Musicology—the study of music history, musical pieces, artifacts and cultures—has historically shown some envy of the sciences, in part because it wanted to be taken seriously. And so it looked for rigorous methods and for provable outcomes and arguments.

Well, our world is smitten with evidence and data.
Yes, “evidence” is that Holy Grail that sends you on the path to truth, right? One of the curious things about music is that it’s often deemed nonrepresentational. You can listen to a piece of music, but it doesn’t shout a specific word at you. So scholars have long struggled to find words to capture music, realizing that it escapes our semantic and even our physical grasp.

So you’re caught in a paradox, trying to interpret aspects of music that elude verbal expression.
Yes, absolutely. On the one hand, music is difficult to describe. On the other hand, music is popularly perceived as so leisurely, so pleasurable, that its beauty and its messages are a given. It’s so obvious that it defies interpretation. But that doesn’t stop people from trying.

Is teaching sometimes a struggle if interpretation is a struggle?
I’ve come across challenges in teaching students how to write about music with a mix of technical precision and personal flair.

What’s the difference between sound and music?
I’ve asked myself that a lot. You could say something as simple as: Music is a type of sound. But of course music has a valuative charge, usually in the positive sense. Music is pleasant sound, or sound that has meaning and cultural value ascribed to it.

Speaking of cultural value, you admire a lot of video games and their music. I confess that when my son played video games, I heard only sound, not music.
There’s a stigma attached to video games as merely recreational, warping our children’s brains, encouraging violent tendencies in members of society. But video games have immense social and cultural force—they gross more than movies.

Yet­—correct me if I’m wrong—one rarely hears of a video game soundtrack becoming a hit.
Actually, video game music is booming. There are video game orchestras. There are touring ensembles that use local orchestras and musicians to put on big multimedia productions—lasers and lights and everything—of video game music. I suppose, though, that if you walked up to someone and asked, “Can you name a famous video game composer?” they might not be able to give you a name.

Can you give me a name?
I can. He’s very popular in Japan: Nobuo Uematsu, who is well known for having composed many of the Final Fantasy soundtracks.

It’s worth noting that games and game music vary greatly across cultures, and in Japan there might be much greater recognition of certain composers. In South Korea, there is a huge e-sports market—electronic sports and competitive gaming—and tournaments fill up stadiums like a football game here would. The pro-gamers there are as much celebrities as Brad Pitt and Angelina Jolie are here.

Why do you think gaming is more respected in Asian cultures?
Maybe the American stigma arises in part from the excessive gun violence in this country. A lot of the action games are what we call “first-person shooters,” where you usually see the gun your character’s holding. When tragedies happen here, it’s easy to look at the visual as well as mechanical analogs to video games. Games are so pervasive that it’s very easy to blame them. I think the association between violence and video games seeps into many aspects of our social conversation.

What’s the premise?
The genre is called a brawler. You and up to seven friends try to toss each other off the stage. It’s very entertaining and friendly.

I’ve known you for only 30 minutes, but you don’t seem like a brawler.
The aesthetics are very cartoony.

Is there something about gaming that brings out an alter ego?
That’s a great question. My friends will tell you that I might shout and laugh a lot while I play, but once the game ends, we’re back to having a civil conversation.

So, you’re writing a book about meritocracy. Connect the dots between musicology and meritocracy.
My book is a critique of the moral, social, and political sustainability of meritocracy, through the lens of art and music and beauty. I think there’s a myth in the broad assumption that people can be reduced to their merits. How often do we hear, “They succeeded on their own merits”?

Yet here you are at an institution that pretty much operates according to that myth.
Absolutely. One of my chapters has to do with blind auditions, blind reviews, need-blind college admissions. The metaphor of blindness, I think, is not coincidental. We adopt these blind processes because to some extent we don’t trust ourselves to be impartial, but that doesn’t mean we get to congratulate ourselves and say that social justice is done. That is: “We can’t see you, so the problem doesn’t exist.”

I actually thought you were making the case for partiality.
Yes, insofar as we need to acknowledge the whole human being rather than parts.

What have you found most surprising about Dartmouth?
How frequently I bump into familiar faces—always a pleasant surprise. It’s my first time living in a small town where, it seems, everyone knows your name.

Do you think we’re moving in a good direction acoustically?
There’s a new branch of musicology called ecomusicology. It’s wonderful. It engages in questions of sound and music and ecosystems and the progression of soundscapes through time. Certainly things are getting more crowded soundscape-wise, and if we don’t keep an ear out, various sounds of nature will soon be—not just metaphorically but literally—inaudible.

The night after I moved to Hanover, in January, as I lay in bed—it was the most intense silence I had experienced in over, I guess, eight years. It was just so eerie. I asked my partner, “Do you hear that? What is that sound?” Then there was this moment of recognition. That answer was: nothing.