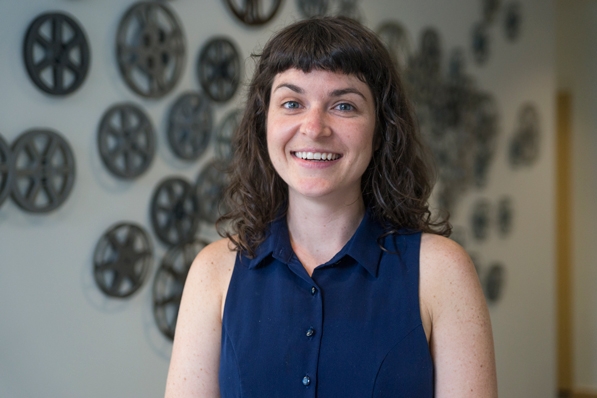 “The BAM series paired shorter, experimental works in 3D with longer features, so there’s a nice attention to the varying possibilities of the medium,” says Jodie Mack, an assistant professor of film and media studies. (Photo by Eli Burakian ’00)

What’s it like to open for Katy Perry at BAM?

Actually Katy Perry has totally copied me. [Laughs.] Have you seen the video for “Firework”? It’s a pastiche of every movie that ever existed—Girl Interrupted, American Beauty, etc.—and a Disney castle with Katy Perry on the balcony and animated stars flying out of her chest. It’s this great farce. But Let Your Light Shine is the same premise—it’s a fireworks show. Even people who don’t like experimental film love this film. The BAM series paired shorter, experimental works in 3D with longer features, so there’s a nice attention to the varying possibilities of the medium.

Why should people care about experimental animation?

People should care because we’ve allowed media to perpetuate racism, sexism, class warfare—it’s impacted the world negatively, and we seem complacent. There’s so much more that media could do, as opposed to perpetuating unjust ideologies. There doesn’t need to be a narrative purpose for every film, there doesn’t need to be financial gain to make a work of art. That’s what I think you can learn through experimental film—the narrowness of mainstream media. And a lot of time it’s uncomfortable for people to watch. They say, “There’s no story.” But this is a visual medium. There are so many possibilities in this little camera. Everyone loves a good sunset, or to look out the window of a train and become mesmerized by natural phenomena.

You write that “with Let Your Light Shine, I aimed to create a . . . pre-lingual point of entry to possibilities of seeing and understanding through contemporary experimental cinema.”

A lot of cinema relies on language to propel the same story over and over again, and we can argue that the continuity system in editing is also its own language. But abstract animation doesn’t rely on these principles, or on anything lingual. It’s pre-lingual. Everyone loves a good fireworks show. You don’t need language to understand it—it’s just spectacular. So that’s what I’m going for with this film. It’s catering to the spectacular expectations of the viewer as opposed to the narrative expectations. You don’t need to rely on any other semiotic or syntactical combinations within your brain to understand it—which is why I don’t get it why people don’t watch this type of cinema all the time! This film is accessible because it’s magic—when you put the glasses on, suddenly these simple images are magnified and they’re coming out right in front of you. It transcends people’s narrative expectations.

How did you discover experimental film?

I was a film studies major in undergrad and my last semester I started working with different modes of camera-less filmmaking—actually using 16mm film itself as a canvas. You’re bypassing photography to make these images, which draws a closer analogy to the plastic arts than cinema, thinking about cinema like an extension of painting or dance or sculpture as opposed to an extension of literature, which is the premise of mainstream cinema.

What’s the best part of being a professor?

I’m sitting on my dream job, for sure! I can treat my films like visual research. The research process allows the medium to stretch, and that’s really the future—combining preexisting modes to find new possibilities. And what’s interesting about teaching here is all these students from different backgrounds. There’s a lot of crossover with experimental film and sciences. This term I have amazing linguistics students, and so we’re thinking a lot about the roots of communication and how systems have formed for representation. Dartmouth is a microcosm of the whole world. We want to study practical things, but we also want to consider what is impractical (and why) and how that can broaden our perspective. That’s infinitely inspiring.