Progress in implementing President Phil Hanlon’s vision to strengthen academic excellence at the College headlined the year-end report presented to the Dartmouth Board of Trustees at its spring meeting. 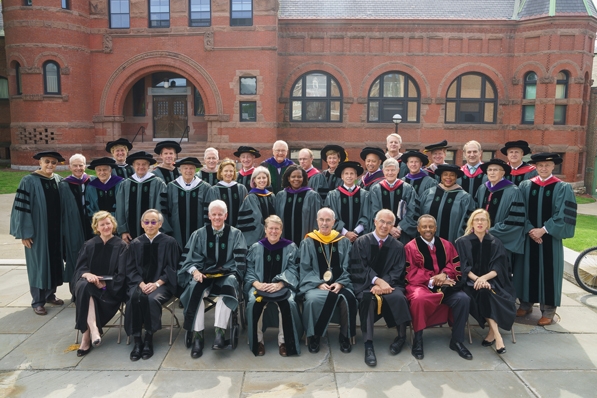 President Phil Hanlon ’77 and members of the Board of Trustees and several trustees emeriti with the honorary degree recipients prior to Commencement on June 14. The board was on campus for its June meeting and to participate in Commencement ceremonies. (Photo by Eli Burakian ’00)

President Hanlon spoke about the momentum created by four recent gifts, totaling $61 million, to attract talented scholars to Dartmouth through the creation of “academic clusters” for faculty and scholarships for students.

The clusters are designed by faculty from across the institution to address major global challenges through the recruitment of interdisciplinary teams. The clusters will focus on the science of decision and risk for application to business and policy, reducing the cost of health care through health care delivery science, and insights from the study of globalization that may be applied to emerging economies and democracies.

One scholarship gift creates a major initiative to recruit top mathematics students to Dartmouth and is named for Dartmouth parent and national business leader Jack Byrne. Another major scholarship gift strengthens the King Scholar Leadership Program and its commitment to developing leaders to end poverty around the globe.

“Dartmouth is a place that sends students and faculty out into the world to help solve its most intractable problems,” said Hanlon. “We are a destination for leading faculty and staff because of the exceptional students and research opportunities that they find here.”

Hanlon highlighted the selection in April of the five inaugural members of the Society of Fellows, a group of postdoctoral scholars who will pursue their research at Dartmouth while gaining mentored experience as teachers and members of the departments and programs they will join. These young scholars will offer students a vision of the excitement and vitality of the life of the mind and will bring fresh perspective and early-career innovation to their work with existing faculty.

This year also saw the continuation of seed-funding initiatives that prioritize “high-risk, high-reward” research. Led by the Office of the Provost, the program is designed to help faculty launch new scholarship, research, and creativity to address complex societal questions and “grand challenge” problems. Ten faculty proposals were funded, facilitating the first steps in exploratory and ambitious projects.

This past January brought Hanlon’s announcement of the Moving Dartmouth Forward plan to end high-risk and harmful behavior on campus and strengthen inclusivity. The president highlighted the selection of the first six house professors, chosen from the faculty, who will provide an intellectual and programmatic anchor in the new residential house communities, set to open in the fall of 2016.

Additionally, the board reviewed and approved recommended appointments and promotions to faculty positions in the Faculty of Arts & Sciences, the Geisel School of Medicine, Thayer School of Engineering, and the Tuck School of Business.

“We are thrilled by the diversity of experience and perspective this exceptional group of new trustees will bring to the board,” said Board Chair Bill Helman ’80. “In Carlos, we welcome our first Tuck-only graduate, and in Caroline we will have the first trustee to graduate within the last 10 years.

“While admittedly small, first steps, we are excited to have in Carlos and Caroline two trustees with very different undergraduate backgrounds, one non-Dartmouth and one far more recent. Beth’s deep commitment to Dartmouth and mix of public and private sector excellence complete this outstanding group. Beth is already a trusted adviser to so many of us and we are thrilled to engage her as a trustee.”

The trustees also honored former board chair and retiring board member Steve Mandel ’78. “We are fortunate to have benefited from Steve’s outstanding leadership for the past eight years, including an exemplary tenure as chair,” said Helman.

“When I joined the board I did not believe we could have a board chair as effective as Ed Haldeman, but Steve has been equally amazing, and what a treasure for Dartmouth. At every instance, often behind the scenes, he has done above and beyond what is best for Dartmouth and set an amazing example not only for the rest of the trustees but for our entire community. We will miss him.”

Commencement 2015
The trustees remained in Hanover through the weekend to participate in a number of activities related to the graduating Class of 2015, culminating in Commencement ceremonies on June 14. Events included Class Day exercises for undergraduates; Investiture ceremonies for the Graduate Studies program, Tuck, and Thayer; the Phi Beta Kappa induction ceremony; the ROTC commissioning ceremony; and the annual Baccalaureate service for all graduates.

Trustees also attended a luncheon with members of the Class of 1965, who were on campus to celebrate their 50th reunion.

Honorary degrees were awarded to political and cultural commentator David Brooks, a New York Times columnist, who delivered the Commencement address, and to philanthropist Russell Carson ’65; former U.S. Secretary of Energy and professor of physics and molecular and cellular physiology at Stanford University Steven Chu; president of The Andrew W. Mellon Foundation Earl Lewis; former executive vice president of law and corporate affairs at Microsoft and CEO and founder of the World Justice Project William Neukom ’64; Columbia geochemist and MacArthur “genius grant” winner Terry Plank ’85; and director and curator of The Museum at the Fashion Institute of Technology Valerie Steele ’78.

Background on Carlos Rodriguez-Pastor Jr.
Rodriguez-Pastor is chairman of Intercorp and general partner of Nexus Group. He is co-founder and chairman of Innova Schools, a private educational network in Peru that emphasizes academic excellence and affordability. In addition to his service as a member of the Tuck Board of Overseers and a member of Tuck’s Latin American Advisory Board, he is as a member of the executive board of Royalty Pharma, co-chairing The Chairman’s International Advisory Council of the Americas Society/Council of the Americas, and serves on the advisory board of Second Curve Partners. He holds an MBA from Tuck and a BA from the University of California, Berkeley. He is married to Gabriela Perez Rocchietti and they have two sons.

Background on S. Caroline Kerr
Kerr is chief executive officer of The Joyce Ivy Foundation, a nonprofit that broadens the college horizons of talented young women from the Midwest. Formerly employed in the Admissions office at Dartmouth, Kerr also worked as a college counselor in Michigan, developing college-counseling programs for both a secondary school and regional educational service agency. She holds an AB from Dartmouth and a master’s in higher education from Harvard. She has served on the Dartmouth Alumni Council and recently completed her second term as president of DGALA, Dartmouth’s LGBTQA alumni association. She is a recipient of Dartmouth’s Young Alumni Distinguished Service Award and two-time recipient of the Jonathan Clarkson Gibbs Group Leader of the Year Award. She lives in Cambridge, Mass., with her wife, Darcy A. Kerr, Geisel ’10.

Background on Elizabeth “Beth” Cogan Fascitelli
Cogan Fascitelli is a managing director and partner at The Goldman Sachs Group, Inc., in the Merchant Banking Division. She is a former director of Carmike Cinemas, Cosmetics Plus Group, Globe Manufacturing, Neuromedical Systems, and Whole Foods Market. She is also a trustee of the nonprofit Partnership for Inner-City Education and the Child Mind Institute. Cogan Fascitelli is a founder of the Centennial Circle of Dartmouth Alumnae, former member of the Dartmouth Alumni Council, Dartmouth College Fund volunteer, and currently serves on the Dartmouth President’s Leadership Council. She holds an AB from Dartmouth and an MBA from Harvard. She and her husband, Michael Fascitelli, live in New York City with their three sons.