Read the full story by Joni B. Cole, published by the Tuck School of Business.

In his opening remarks at the Tuck School of Business Investiture on June 13, Carlos Rodriguez-Pastor Jr., Tuck ’88, expressed his appreciation to outgoing Tuck Dean Paul Danos, to the Class of 2015 and their support system of faculty and family, and to Gen.  Juan Velasco Alvarado, who overthrew the Peruvian government in 1968, forcing Rodriguez-Pastor’s family to flee their homeland when he was just 9 years old. 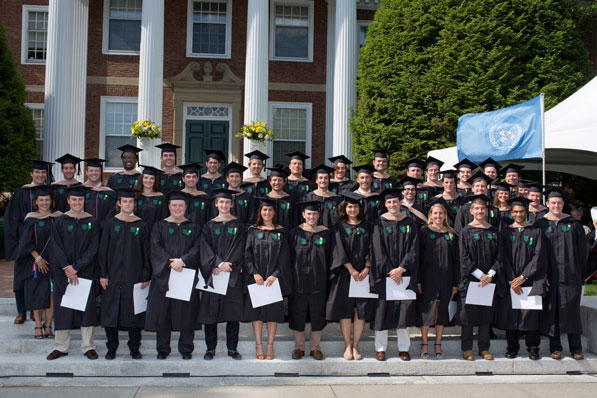 “Support systems and influences don’t always come in the form you expect,” said Rodriguez-Pastor, who serves as chairman of Intercorp and general partner of Nexus Group, which invest primarily in companies in Peru and the Andean region. When Alvarado seized power, Rodriguez-Pastor’s father was CEO of Peru’s central bank, and considered a threat. Carlos Sr. was forced to escape under cover of night; his family followed six months later, and they settled in California.

“Today I can stand here and say I am thankful for him [Alvarado]. ... It comes down to having altered a key default setting,” says Rodriguez-Pastor, who on Commencement weekend was elected a charter trustee member of Dartmouth’s Board of Trustees.

On a day full of sunshine and promise, Rodriguez-Pastor cautioned Tuck’s 276 MBA graduates to beware of prescribed ways to view the world, particularly in three areas: adversity, career, and success. Like a cell phone, the world, too, has default settings, but they are frequently wrong,” he said.