Vox Populi: An Ode to the Liberal Arts

On the eve of Dartmouth’s 2015 Commencement, Trustee Emeritus William Neukom ’64 spoke to current members of the Dartmouth Board of Trustees and their guests, including those who would, like Neukom, receive an honorary degree at the next day’s ceremonies. As is the custom at the traditional dinner, those to be awarded honorary degrees make remarks to the assembled guests. Here is what Neukom said. 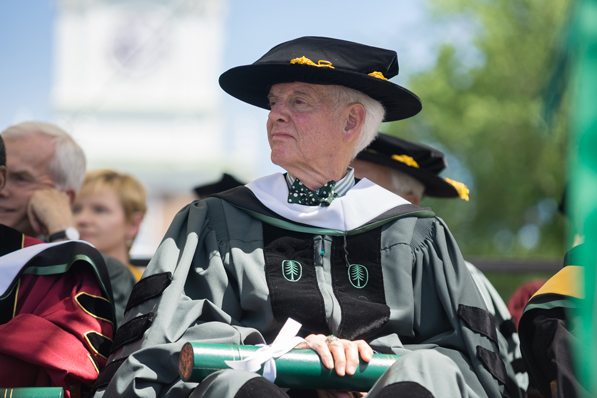 It is a privilege to be at this event, and it is a challenge to come up with a few words that might have some even modest value for this auspicious audience. Let me offer an ode to the liberal arts.

Two aspects of a liberal arts education are: First, a broad array of subjects from which the students can pick a major; and second, an even broader horizon of opportunities to apply a liberal arts experience.

As to the first phenomenon, consider Jim Wright’s grandson, who came to Dartmouth to pursue his studies in mathematics and biology. He will be graduating tomorrow with a major in the classics.

Or consider a recent graduate who spoke to a Silicon Valley alumni group about filling his pre-med schedule with an Italian literature class. He switched his major the next term.

As to the second phenomenon, an alumnus friend majored in religion, went on to the top of his class at The Baker School, and is well on his way to becoming one of the most powerful and influential business people in the media sector.

And also consider the romance language major who then pursues a post-bac, pre-med program on her way to medical school.

These are somewhat exotic examples. Likely there are similar stories all around this room, stories of transformative undergraduate learning experiences in a liberal arts context.

It seems to me that while the substance of the curriculum is important, so, too, are the taught disciplines of objective observation, critical and creative thinking, and clear communicating. Those are the skills that promote competence and leadership in the work place, useful citizenship of vigilance and advocacy for communities of peace, opportunity and equity throughout the world, and personal lives of principle, empathy and service.

Dartmouth is devoted to the liberal arts and—when it is doing it right—offers an extraordinary opportunity to its faculty, staff, and students. And so, here is to Dartmouth, with admiration and gratitude.