In the summer of 1968, a Colby Junior College student took a part-time job typing papers for AT&T executives participating in a management program at Dartmouth.

“Their handwriting was horrendous,” recalls the typist—Virginia Hazen, who this month will retire as director of financial aid and one of the College’s longest-serving employees. 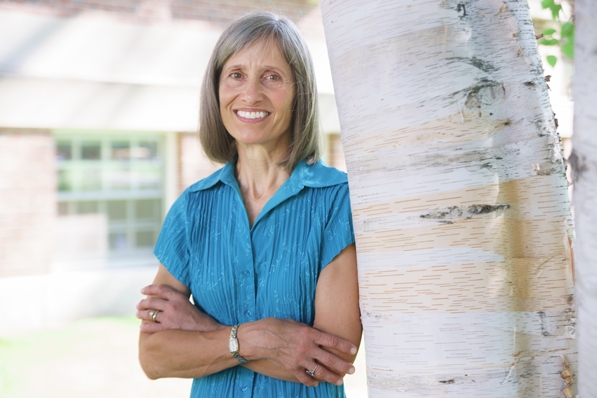 Virginia Hazen is retiring after working nearly five decades at the College. (Photo by Eli Burakian ’00)

Hazen and I met at the round table in her office in McNutt, where hundreds of students and their families have sat. On the wall beside us, a collage of photos of her beloved dogs.

“I can’t tell you the number of distraught students and parents who have visibly relaxed when they’ve seen these pictures,” she says. “Then we can go on to what’s troubling them.” Still, she says, she always keeps a box of tissues on hand.

Back in ’68 Hazen liked the typist work—undeterred by poor penmanship, messy carbon paper, and requests for multiple revisions. So when a full-time secretarial position opened in the president’s office, she left Colby and went to Parkhurst, to work for College Executive Officer Gilbert Tanis ’38.

In those days, President John Sloan Dickey ’29—then in the final year of his tenure—would bring his golden Lab, Rudy, to work with him every day.

“Every morning he and Rudy would come in, and he would sit on the long sofa where the three secretaries were, tell us a story, and pass the time of day,” says Hazen. “Then he would go on into his office and you wouldn’t see much of him for the rest of the day. But he always spent five or 10 minutes with us every morning.”

The pace changed when the trustees appointed John Kemeny, a Hungarian-born mathematician with a penchant for embracing social change, as the College’s next president.

“He needed more people almost immediately, and it was a noticeably faster pace,” says Hazen. “He was not one who came in and passed the time of day—he was all business.”

But when Hazen’s supervisor complained to Kemeny that Hazen was planning to take a promotion in the provost’s office, the president had Hazen’s back.

“It was upsetting to him to have secretaries change, and he actually said something to John Kemeny about it, and John Kemeny came back with, ‘But that’s what we’re trying to do—we’re trying to get them’—women—‘to take advantage of opportunities to move up!’ ”

In the late 1970s, Hazen worked with Vice President and Dean of Student Affairs Don Kreider, another mathematician who was helping to facilitate the cultural shifts that came with coeducation.

“I wasn’t privy to a lot of the discussions other than to take shorthand at meetings, but they were not all calm, quiet discussions. But there was always the sense that we were going ahead, and there was no turning back,” Hazen says.

After a succession of supervisors, Hazen finally decided, “I’ve got to get myself in a position where I don’t depend on a boss.” She told then-Dean of Student Affairs Frank Smallwood ’51 that she wanted to finish her education.

“I said it off the cuff. I was married and had a young child and financially I had no way of doing it. But the next day, there were appointments arranged for me all over campus to figure out how Ginny was going back to school—at Dartmouth.”

At first she thought the cost would be prohibitive. “I can’t tell you the panic when I got that bill. Tuition was almost as much as I made in an entire year, and I was only taking one course,” she recalls. Somehow Smallwood arranged for the College to pay for Hazen’s course work—an early version of the “grant-in-aid” program that makes Dartmouth courses available to staff to this day.

She took nearly a dozen courses—economics, psychology, math with William Slesnik. “I swear the man had eyes in the back of his head,” she recalls. “I would leave work to run to class, and I mean run” to avoid his disapproval of tardiness.

“I didn’t know how to pick easy courses. Somebody should have advised me,” she says, laughing—though she did find an English class on science fiction, taught by the late Noel Perrin, “easy to pass, if you read the books. It was great because I never would have read science fiction, and it was fascinating.”

Hazen transferred her Dartmouth credits to Colby (now Colby-Sawyer College), but to finish her bachelor’s degree, she needed to complete an internship—and found one in the Office of Financial Aid, where she discovered her calling. “Financial aid combined my love of working with people with my love of working with numbers,” she says. The summer after she graduated, the department had an opening, and she was hired—working full time while completing an MBA program through Plymouth State College.

She loved the job. “It was fun to get up and go to work every morning and help these students,” she says. That passion has held steady through a variety of leadership roles, generations of undergraduates, and a half-dozen administrations.

“One of the most rewarding experiences for me was when Jim Wright became president,” she says. “When I went through the receiving line at the Convocation picnic—a, he knew who I was, and b, he said, ‘We’re going to make a $2 million injection into the scholarship budget; I want you to think about how you want to spend it.’ It was like, wow!”

A large part of Hazen’s career over the years has been overseeing the transition from “calculators and pencils with erasers” and carbon-copy federal reports to a fully computerized system. The office was completely paperless by 2008.

Not everyone was happy with the transition at first, Hazen says. “We decided that we wouldn’t digitalize some of the older classes. But within a month, if somebody had to get a paper file for one of those classes, it was like, ‘I’ve got to go get a file?!’ I’m proud that we went paperless long before many of our counterparts did. Many of them are not there yet.”

Another legacy she’s proud of: “the role I’ve been able to serve for other staff coming through who never thought they could get a college degree. I say, ‘Look, I did it, you can do it.’”

While Hazen isn’t yet sure of her long-term plans for retirement, she has some short-term goals: first, helping her sister finish hiking all the 4,000-foot peaks in New Hampshire—a milestone Hazen first met on her own in 2000.

An avid dog trainer, she is also planning to compete in the Green Mountain Iron Dog obstacle course event with her Lab, Lucy, in September. “I have to be able to carry my 50-pound dog 50 feet. She’s actually letting me do it, though she takes advantage to lick my face.”