Mukul Sharma on the Stories Rocks, Oceans, and Planets Tell 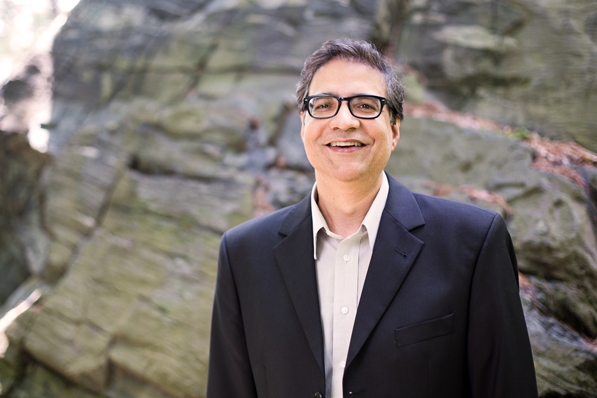 “The sun’s composition provides a benchmark against which we can understand the evolution of different planets and meteorites,” says Professor of Earth Sciences Mukul Sharma. (Photo by Rob Strong ’04)

Travel back, say, 4.5 billion years. Crash! Mars-sized meteorites hit each other, forming a new planet. So how did that molten ball of lava evolve into Earth as we know it? Such is the type of cosmic conundrum Mukul Sharma, a geochemist and professor of earth sciences, strives to understand through his research. In a conversation with Dartmouth Now, Sharma shares his thoughts on the wonders of the world, the questions he asks of the ocean and sun, and the most important thing he can teach his students at Dartmouth.

You earned your master’s and PhD in geology at the University of Rochester, where you realized you wanted to study the Earth more than rocks. What was the draw?
I took snapshots of interesting events in time, one of them being the massive eruptions of lava in Siberia about 250 million years ago that caused a climate catastrophe, and the demise of essentially 95 percent of all species. This was the granddaddy of extinction events, and it made me realize how humbling the whole thing is. We have survived through this little thing, this 5 percent of species, so these forces were shaping not only the Earth, but life itself. But I was not interested so much in understanding the extinction as what caused this massive eruption—what were the consequences of that eruption in terms of the genesis and evolution of the lavas that came out?

Like the planet, your career also has evolved, from geologist to petrologist to radiogenic isotope geochemist. What does the latter entail?
My first degree was in applied geology—science that is needed to prospect for ores, ground water, etc., and to engineer tunnels, dams, and roads. But we also learned fundamental aspects of geology, which got me interested in examining planetary evolution using isotopes in rocks. Since then I have worked on problems as diverse as the mixing of dust within solar nebula 4.6 billion years ago, and water-rock reactions that take place during hydraulic fracturing. Almost 20 years ago I became interested in measuring the concentration and isotope composition of a specific element called osmium in the ocean. Osmium isotope fingerprints can tell us about the changes in the amount of cosmic material falling on Earth, and about weathering on the continents. When I was initially doing this, I lived in Southern California and went to Venice Beach. You know this beach?

Yes, lots of surfers.
I went there. The ocean is coming in, this big, boisterous ocean with bubbles. I was not interested in surfing. But I asked the ocean the question: How many atoms of osmium have you got? [Laughs.]

And what did the surfers say when they heard you talking to the ocean?
Another nutcase. There are lots of them over there.

My understanding is that the focus of your research has recently moved from the ocean to the sun.
Yes. The sun’s composition provides a benchmark against which we can understand the evolution of different planets and meteorites. So we’re trying to study samples of solar wind that NASA collected more than 10 years ago. But it all started with trying to understand the question that I asked the ocean when I went to Venice Beach. How many atoms of osmium have you got? So that was seawater; now it is solar wind. It’s the same type of problem, only over 100 times harder!

Growing up, did you always know you wanted to be a geologist?
I grew up in Delhi and thought I would become a physician. In high school, I took the courses that are needed to go in that direction, and one of them involved dissection. I simply could not handle blood.

So what made you choose this field?
A friend of mine who was already in college was in geology and suggested I give it a try. He told me about the wonderful things geologists do, which is to go around to exotic places and field camps for several weeks, maybe months, meeting new people, things that I wanted to do. And then, rocks; you can beat them up. No blood comes out. [Laughs.]

One of your projects looks at what hit the Earth 66 million years ago, killing off the dinosaurs. Another looks at a more recent impact—13,000 years ago—that caused the Earth’s temperature to plummet. You seem like the right person to ask: How worried should we be about another giant extra-terrestrial object crashing into Earth?
I think there is a reasonable level of threat one has to calculate. Geological record shows that large impacts have the potential to cause planet-wide changes that would impact life. So we need to keep an eye on it, and we should have the technology to mount some kind of an operation to nudge it if something really big is in our way.

At Dartmouth, you’ve said the most important class you teach is Earth Resources. Why this intro course?
The sustainable exploitation of resources—metals, minerals, oil, natural gas, water, soil, rocks—is controlling our life, our destiny, our security, our well-being. I find that course to be the most rewarding because I have students do presentations on topical things like hydraulic fracturing. Some of the people here are going to become leaders of businesses, senators, one of them may be the next president. So if they attend a class that opens their eyes to the underlying science of resources, then they will be able to utilize that understanding and make the correct policy decisions.

Do you have a favorite place on Earth?
That’s an interesting question. Why the Earth? Why not Mars? Or some other part of the solar system. [Laughs.] I like the tall mountains because they are telling me the story of how plate tectonics has changed the surface of the Earth. I like the ocean ridges, where we have enormous primitive life present and hydrothermal fluids spewing from orifices down below. Does that mean I do not like Hawaii, which does not have much to do with plate tectonics? I like Hawaii, too. Hawaii is a hot spot. Early evolution of Earth almost certainly involved extensive hot spot related volcanism. It is not easy to find a favorite place; they’re all fascinating in their own way. They’re all telling stories about the Earth, but only a part of the story. The complete story is the complete Earth, you see.