Fresh off a season premiere win at Georgetown last week, Dartmouth football returns to Hanover for Saturday’s home opener against Sacred Heart under the lights of the newly renovated Memorial Field. 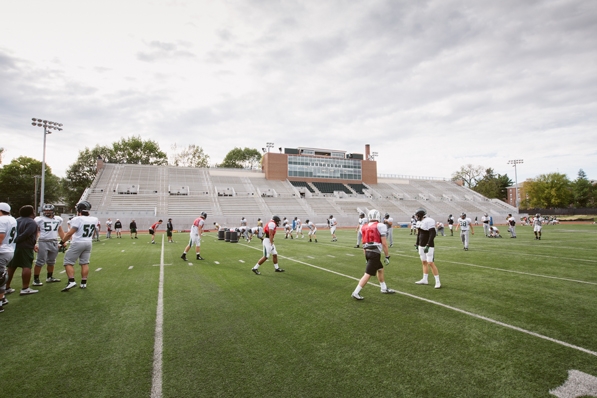 “Now that we have essentially transformed the entire stadium in the last 10 years, we have a venue that will be truly impressive to recruits as well as a great source of pride to our players, alumni, and staff,” Director of Athletics and Recreation Harry Sheehy says. (Photo by Robert Gill)

Adding to the excitement of Big Green’s No. 2 preseason ranking and high hopes for ending a nearly 20-year drought in the pursuit of the Ivy League crown, the team will honor Dartmouth faculty and staff with an employee appreciation ticket discount and tailgate party, and a chance to raise money for Upper Valley community programs. Athletics will donate a dollar from every adult ticket sold to the College’s United Way campaign.

Director of Athletics and Recreation Harry Sheehy says the board of trustees’ decision last year to move ahead with rebuilding the stadium’s West Stands completes the renovation of Memorial Field and has improved the team’s recruitment of players, contributing to the Big Green’s success.

“Now that we have essentially transformed the entire stadium in the last 10 years, we have a venue that will be truly impressive to recruits as well as a great source of pride to our players, alumni, and staff,” Sheehy says. “When you add together Floren Varsity House, the new East Stands, the FieldTurf playing surface, the lights, the new sound system, the video scoreboard, and now the new West Stands, we’ve got a first-rate 21st century stadium.”

The renovated grandstand features wider aisles and concourses, handrails, modern restrooms, a premium chair-back section between the 40-yard lines, and accessible seating on three levels connected by an elevator. The new press box will also be accessible by elevator, and will include upgraded technology for video streaming, television and radio broadcasts, and video scoreboard operation.

The West Stands were originally completed in 1923, and the structure had been deemed by engineers to be nearing the end of its useful life. The trustees approved the replacement project in 2008, but it was suspended, along with several other campus projects, due to the economic downturn.

In one year, the 91-year-old concrete stands were demolished and replaced while preserving the ivy-covered, brick façade. When construction began in fall of 2014, this season’s home opener against Sacred Heart imposed a no-slip deadline for the project. Final touches were still in the works days before the doors open in advance of Saturday’s 7 p.m. kickoff.

“I’m very excited that our fans will experience a significant upgrade in terms of comfort, convenience, and the whole game day atmosphere,” Sheehy says.

The employee appreciation event offers all Dartmouth College and DHMC employees and their families $8 tickets discounted from $15, and a complimentary pregame tailgate party courtesy of Ledyard National Bank. The tailgate event begins at 6 p.m. in the south end zone.

Tickets can be purchased in person at the Dartmouth Athletics Ticket Office, online at DartmouthSports.com or by calling 603-646-2466.