Three of the seven finalist companies in the pitch competition are run by Dartmouth graduates or were started at the College, and the winner, FreshAir Sensor Corp., is the brainchild of chemistry professor Joseph BelBruno, and Jack O’Toole, Tuck ’14.

Case is traveling around the country with his Rise of the Rest project, a campaign he’s backing to draw attention to overlooked pockets of entrepreneurship around the U.S. 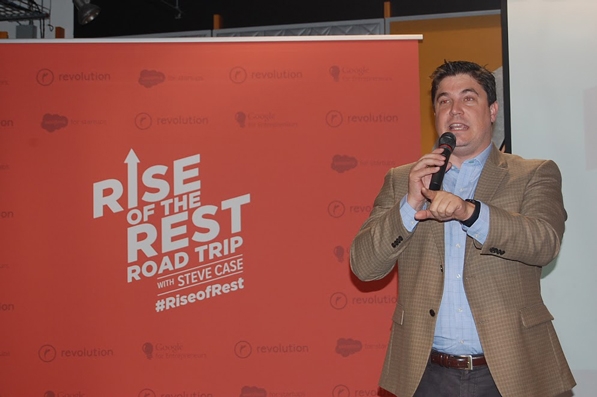 Case’s Oct. 1 New Hampshire visit, which also included a meeting with dozens of tech business leaders and Gov. Maggie Hassan, was organized in large part by Jamie Coughlin, director of entrepreneurship for the College, including the Dartmouth Entrepreneurial Network (DEN) and the Innovation Center and New Venture Incubator.

In announcing the winner of the Shark Tank-like pitch competition, emceed by Coughlin, Case said, “It’s a company that can put New Hampshire on the map. If they innovate successfully, they can build a great company, create a lot of jobs and change the world, because they are dealing with something that is really important to us in terms of health, making sure we and our kids are in safe environments. … Please give it up for … FreshAir!”