At a Dartmouth presidential forum Nov. 10, Democratic candidate Hillary Clinton acknowledged that the electorate and American politics in general have become very angry.  The solution, she said, is for both parties to work hard to find common ground. 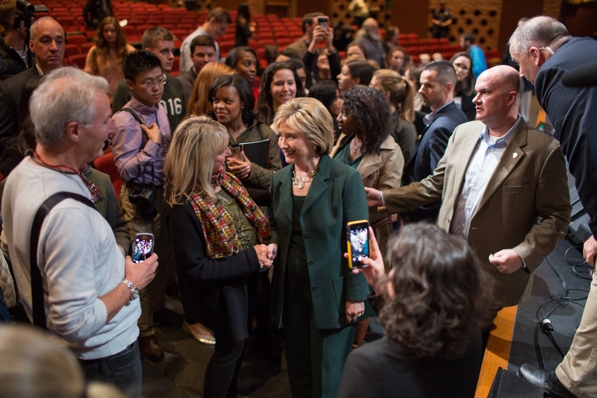 Democratic presidential candidate Hillary Clinton speaks with students and other members of the audience after the Nov. 10 forum. (Photo by Robert Gill)

That does not mean agreement on all issues, but rather that politicians agree to debate questions on their merits, she said.

“I don’t mind having a debate about any idea. I just ask that it be at least fact based. I know that’s a radical idea, but we have moved our politics so far from an evidence-based approach,” she said. “We’ve got to get back to some common understanding of what’s happening in the world.”

The former secretary of state, who held an earlier campaign event on campus in July, returned to Dartmouth to take part in the “America’s Economic Future” presidential candidate speaker series sponsored by the Tuck School of Business and the Nelson A. Rockefeller Center for Public Policy and Social Sciences.

More than 1,000 people filled Spaulding Auditorium and an overflow space in Alumni Hall, where the event was streamed on a large screen.

Clinton is the third presidential candidate to take part in the series, which is organized by former New Hampshire Gov. John Lynch, a senior lecturer at Tuck’s Center for Global Business and Government. Republican hopefuls Sen. Lindsey Graham, R-S.C., and former New York Gov. George Pataki spoke at the forum in recent weeks.

Lynch, New Hampshire’s longest-serving governor and a longtime champion of the state’s first-in-the-nation primary, has extended invitations to all the presidential candidates to speak at the College.

“This is all meant to be an educational opportunity for our students,” said Lynch. “It exposes them to new ideas, new ways of thinking, and new policy positions, and gives them a better idea of why someone is running for president of the United States.”

After a brief sit-down conversation with the candidate, Lynch opened the floor to a town hall-style question-and-answer period, calling on Dartmouth and Tuck students to take advantage of the opportunity to interact with the candidate.

In response to students’ questions, Clinton advocated for “smart power” diplomacy in the face of China’s expansion into the South China Sea and opposed an American military response to the Islamic State and the unrest in Syria. She reiterated her opposition to the Trans Pacific Partnership agreement backed by the Obama administration, and she underlined her support of a woman’s right to equal pay for equal work.

One Hanover voter asked Clinton for her opinion of Republican candidate Donald Trump.

“I am, like everyone else, seeing how this campaign of his develops. I don’t know what the Republican voters are going to do. That’s their business, not mine,” Clinton said. “But I hope to be the nominee and I will run against anyone they nominate. If it’s him, put on your seatbelts, that’s all I can tell you.”

Standing in line outside the Hopkins Center before the event, Sollana Brown-Irvin ’19 said she had come out to hear Clinton as she considers which candidate she will support in the primary. This will be the Brooklyn native’s first chance to vote in a presidential election.

“I will vote in New Hampshire. It means a lot more here,” she said. “That’s why I wanted to come to this and see her, to figure it out.”

Over the decades, Dartmouth has been a destination for presidential primary hopefuls. The College has hosted Republican and Democratic debates in past cycles, and this year brings another parade of candidates.

Description
Ella Bell Smith, a professor of business administration, talks in a podcast interview about getting feedback at work. “When you check the box, always let people know you checked the box,” she says.
Harvard Business Review