South Carolina Sen. Lindsey Graham told the Dartmouth crowd at the Top of the Hop Wednesday that the greatest threats to America today are too many terrorists and too much debt. 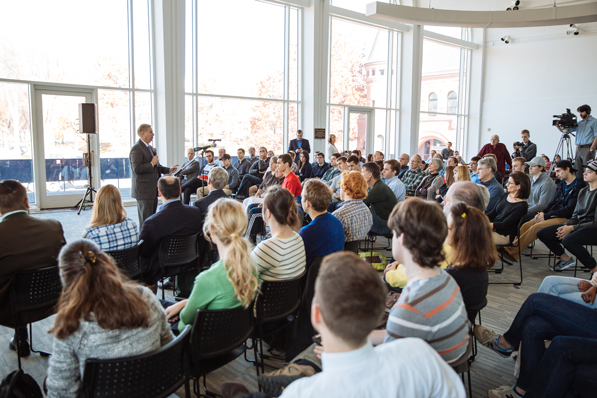 Sen. Lindsey Graham of South Carolina, a GOP candidate for president, speaks to more than 100 Dartmouth students and members of the public on Nov. 4 at the “America’s Economic Future” forum, sponsored by the Tuck School of Business and the Nelson A. Rockefeller Center for Public Policy. (Photo by Robert Gill)

The Republican presidential hopeful delivered his stump speech and answered questions from the audience as part of the “America’s Economic Future” candidate series sponsored by the Tuck School of Business and the Nelson A. Rockefeller Center for Public Policy and Social Sciences.

Graham distinguished himself from the other Republican candidates with his outspoken support for the federal Social Security system and for comprehensive immigration reform that includes a path to citizenship.

“I’m a Republican, but I understand why Social Security exists and I am going to save it,” said Graham, who, along with his sister, was able to survive financially as a young man thanks to Social Security benefits received after both parents died suddenly.

Graham was introduced by former New Hampshire Gov. John Lynch, a senior lecturer at Tuck’s Center for Global Business and Government. Lynch, who helped organize the candidate forums, introduced Republican hopeful George Pataki, the former New York governor, on Oct. 6, and he will welcome Democrat Hillary Clinton on Nov. 10 as part of the series.

Lynch said the New Hampshire primary gives Dartmouth students a unique opportunity to meet and question many of the presidential candidates on a personal level.

“We’re very fortunate in New Hampshire that so many primary candidates come here to engage in the kind of retail politics that pushes them out from behind the podium to meet with voters and answer the tough questions,” he said. “For the students here at Dartmouth to have this access is terrific. It makes politics more engaging and exciting.”

Over the decades, Dartmouth has been a destination for presidential primary hopefuls. The College has hosted Republican and Democratic debates in past cycles, and this year brings a parade of candidates.

Former Maryland governor and Democratic candidate Martin O’Malley has made two campaign stops on campus, most recently on Oct. 16. Republican John Kasich, governor of Ohio, appeared at a campus taping of the cable news show Morning Joe on Oct. 22, and Clinton held an earlier campaign event at the Bema, Dartmouth’s natural amphitheater, over the July Fourth weekend.

“Certainly the whole nation is watching leading up to this primary and you get a sense that your vote really matters,” said David Tramonte ’18, a government major who is involved in the policy research shop at the Rockefeller Center. “Seeing the candidates and everyone wanting to be here makes for a great atmosphere.”

Tramonte asked Graham about his stand on an Israeli-Palestinian peace settlement, noting that it is the 20-year anniversary of the assassination of Israeli Prime Minister Yitzhak Rabin.

Graham said he supports a two-state solution, but not until the Palestinians renounce violence. “I yearn, and pray, and will work for peace, but I will not ask Israel to sign any suicide pact.”

Graham said that as president, he would win the war against radical Islamic terrorism. He called groups like the Islamic State and the theocratic government of Iran “religious Nazis,” and said they must be stopped. He would gather a coalition of Mideast states and attack ISIS in Syria, then go after Syrian president Assad, he said.

Domestically, Graham said, he would attack the mounting debt that is crippling the economy.

“We’re becoming Greece,” he said, referring to the Mediterranean nation’s threat of default and withdrawal from the European Union.

Graham told Dartmouth students that they can make a difference in the nation and the world, and he asked for their support in his bid for the presidency.

“Dartmouth is a place where people would die to come from anywhere in the world,” he said. “You are the brightest people in the world. If we can deregulate the economy, you would fly, you would soar.”