Dartmouth’s chapter of Phi Beta Kappa, the nation’s oldest academic honor society, inducted 22 new student members from the Class of 2016 at its 228th annual meeting on Nov. 3, held in the president’s house. 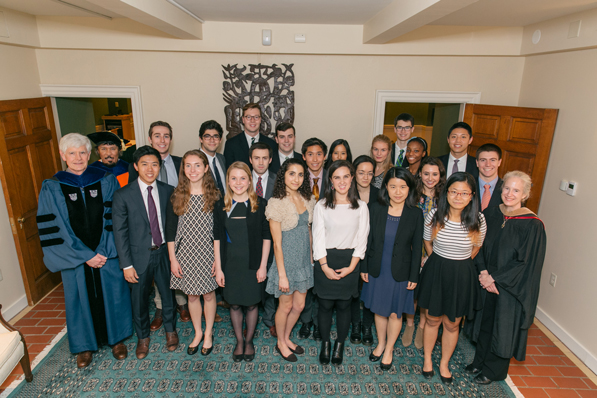 To be eligible for election to Dartmouth’s chapter students must have completed eight terms within three years of matriculation and hold one of the top 20 cumulative grade point averages in their class.

The program, which was chaired by chapter president Jay Hull, associate dean of faculty for the social sciences and a professor of psychological and brain sciences, included remarks by Kate Soule, secretary-treasurer of Dartmouth’s Alpha of New Hampshire chapter, president of the national Phi Beta Kappa Society and director of Dartmouth’s Arts and Sciences Finances and Research Administration. Professor of French Keith Walker, serving as marshall, read the names of the inductees.

“The fall Phi Beta Kappa induction is a wonderful celebration of academic excellence in the liberal arts,” Soule said. “The students inducted today represent the top of the senior class. They have achieved much in their first three years at the College, and it is a pleasure to honor them with early induction into America’s oldest and most prestigious honor society. The Sophomore Prize winners are equally impressive and I look to hear more from them during their college careers.”

The chapter named Randall Balmer, the John Phillips Professor in Religion, an honorary member. Balmer is the chair of the religion department and director of the Society of Fellows.

Nelson Lichtenstein ’66, director of the Center for the Study of Work, Labor and Democracy and MacArthur Foundation Chair of History at the University of California, Santa Barbara, was elected to alumni membership. Both Balmer and Lichtenstein will be officially inducted at the society’s spring meeting.

The chapter also gave the Phi Beta Kappa Sophomore Prize to eight members of the Class of 2017, an honor that recognizes students with the highest grade point average after completion of five terms.

Founded in 1776 at the College of William and Mary to advocate for and recognize excellence in the study of the liberal arts and sciences, Phi Beta Kappa has 280 chapters on college and university campuses and well over half a million living members. Dartmouth’s chapter, the fourth oldest in the nation, was established in 1787.

The following students were inducted to Phi Beta Kappa, Alpha of New Hampshire, on Nov. 3.