When fall term ends at Thanksgiving, some Dartmouth students and faculty have something extra to be thankful for—the chance for adventure away from campus. 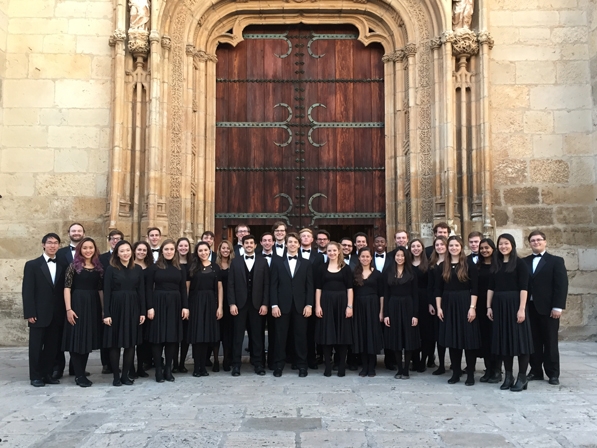 Members of the Dartmouth Glee Club gather in front of the Catedral Magistral in Alcalá de Henares, Spain. (Photo courtesy of Maria Laskaris ’84)

Between Thanksgiving and Christmas this year, some helped a university in an emerging nation prepare students for job markets. Others learned what life is like in a divided city where ancient ruins still fuel political strife, or fought poverty in South America. Musical ambassadors sang their way through cathedrals in Europe. But these weren’t mere getaways. The globetrotting is meant to shape the way students continue their studies when they return to campus. 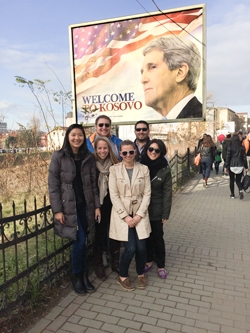 Students from the Tuck School of Business and the Gender Research Institute gather in front of a sign welcoming Secretary of State John Kerry to Kosovo during his recent visit. The students are part of a U.S. AID and Government of Kosovo-funded collaboration with the University of Prishtina. (Photo courtesy of Matt McGrath, Tuck ’16)

MBA candidates from the Tuck School of Business are teaming up with the Gender Research Institute at Dartmouth (GRID) to help economics faculty at the University of Prishtina in Kosovo develop experiential learning courses. With funding from the Government of Kosovo and the U.S. Agency for International Development, four Tuck students are joining two undergraduate members of GRID and two students from the University of Prishtina to conduct an electronic survey of the university’s students, alumni, and faculty, as well as business people. The aim is to identify the skills Kosovo students most need to succeed in the developing job market. The project is part of Dartmouth’s participation in the Transformational Leadership Program in Kosovo, administered by World Learning.

Stephen Powell, a professor of business administration, is leading the Kosovo project for Tuck.“I’m trying to make connections with faculty who are interested in experiential learning,” he says. “I’m in discussions with several about how we might get such a course started.” The university is still “run along socialist lines,” he adds. "This is a challenging environment.”

But it’s also an exciting one, says Associate Professor and GRID Director Annabel Martín. In mid-December, with Dartmouth colleague Assistant Professor of Spanish and Portuguese Txetxu Aguado, she taught a three-day seminar in Prishtina called “Times of Crisis.”

“We are meeting with an interdisciplinary group of 20 University of Prishtina faculty members and graduate students—from law, sociology, comparative literature, anthropology, and political science—to discuss issues related to democracy and higher education, memory and national identity, and reimagining the future,” Martín says.

The two GRID students, Lisa Brinck-Johnsen ’17 and Tien Truong ’16, were shepherded around the city by Teuta Sahatqija, a member of the Kosovo Parliament. In the fall, Sahatqija was a Dartmouth graduate student in Women’s, Gender, and Sexuality Studies. She introduced Brinck-Johnsen and Truong to women parliamentarians and business leaders and took them to see TV stations.

The role of women in government and commerce is evolving in the emerging nation, and Brinck-Johnsen says Kosovo faces many issues regarding gender. “Women make up more than 60 percent of the university graduates, but far fewer women go on to join the workforce than men do,” she says.

That’s one reason the Tuck/GRID team wants to make sure that women and minorities are included in the effort to prepare students to enter the job market.

During the break between terms, a dozen students toured Jerusalem with Charles Wheelan ’88, a senior lecturer and policy fellow at the Nelson A. Rockefeller Center for Public Policy.

Sarah Ogren ’16 wrote a blog about the journey, with photos by Wheelan.

At the World Bank offices in Jerusalem, the group garnered insights into the Palestinian economy. There were lighter moments, too, as they listened to Israeli reggae while approaching the border to the Jordanian side of the city.

They spent one Saturday exploring the ancient city of Petra.

“The elaborate designs carved into the rock, the ingenious water system, and the stunning red sandstone were truly remarkable," Ogren writes. “The treasury facade is decorated with figures and is also famous for its role in the third Indiana Jones movie.”

Students in Professor of Economics Diego Comin’s “Econ 70” class visited Pamplona Alta, an impoverished part of Lima. Pamplona Alta began as a shantytown. Now pueblos are being replaced with sturdier buildings, including, the students hope, a place where people can read and gather. They are spearheading a fund drive to build a library there.

“The library will serve as a safe haven for the community and will be built according to national safety regulations to ensure that it can withstand earthquakes and other national disasters,” Hoi Wong ’17 explains in a gofundme.com video seeking donors for the construction.

Right after Thanksgiving, 34 members of the Dartmouth Glee Club, led by director Louis Burkot, embarked on a six-day concert tour in Spain.

“The highlight of the tour was performing in such beautiful churches and cathedrals in Segovia, Alcala, and Madrid,” says Alanna Kane ’17. "There is a timelessness and universality with some of these great classical works, like Mozart's Requiem,” and performing them for the Spanish audiences in these breathtaking spaces was truly moving.”