John Arthur Rassias, the William R. Kenan Professor of French and Italian, Emeritus, and creator of the Rassias Method of teaching languages, died Dec. 2 at his home in Norwich, Vt. He was 90. 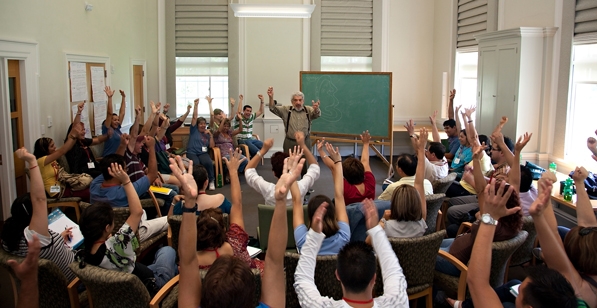 Professor John Rassias demonstrates the Rassias Method to a group of teachers from Mexico in 2010. (Photo by Joseph Mehling ’69)

He will be remembered for his internationally renowned teaching method—which includes rapid-fire drills, immersion in culture, and a healthy dose of theater—a unique style that quickly makes students comfortable using a new language. Key to the method was his dramatic style, the goal of which was to eliminate students’ inhibitions and encourage dialogue from the first day of class.

Rassias grew up in Manchester, N.H., a son of Greek immigrants. Before heading to college, he served in the U.S. Marines, piloting an amphibious tank in the 1st Marine Division’s landing in the Battle of Okinawa, on April 1, 1945, the last and largest of the Pacific island battles of World War II.

Rassias Partnership With Mexico Is Having an Impact

In 1964, he began a long affiliation with the Peace Corps language programs, working as a consultant and developer. Two years later, he became director of the first pilot program of languages for the Peace Corps in Africa, leading training in Ivory Coast. The Rassias Method of language instruction was later adopted by the Peace Corps.

Rassias joined the Dartmouth faculty in 1965, and served thousands of students and colleagues for close to 50 years. He was a founder of the College’s Language Study Abroad programs and was the director of foreign study programs for several years. His commitment to communication and cultural understanding was the cornerstone of his life.

The Dartmouth community learned of Rassias’ death today in an email from President Phil Hanlon ’77. “Our thoughts are with John’s family,” wrote Hanlon.

President Hanlon recalled the words of former Dartmouth President James Freedman, who he said captured the magnitude of Rassias’ impact on students and teachers around the world when Wright told the Dartmouth Alumni Magazine, in 1990, that “Professor John Rassias’ high-powered language drills reveal the values of foreign cultures more tellingly than a dozen weighty treatises.”

The Rassias Method of instruction lives on, not only at Dartmouth, but in places across the world. In the past few years the method—brought to Mexico by John’s daughter Helene Rassias-Miles—has been taught to more than 2,000 English language public school teachers who, in turn, have instructed hundreds of thousands of Mexican students in states throughout the country.

Rassias-Miles, her father, and Dartmouth alumna Luanne Zurlo ’87 created the Mexico project. “It was such a huge love of his,” she said yesterday from Mexico. “He was so excited that I was coming down this week to work on it with our colleagues.” 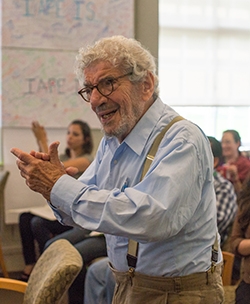 Professor John Rassias claps his hands to make a point while teaching Mexican teachers of English in 2014. (Photo by Eli Burakian ’00)

Dartmouth was not the only recipient of Rassias’ enthusiasm for language. He shared his method with the People’s Republic of China, Bulgaria, France, Japan, Greece, Turkey, the city of Baltimore school system, the Federal Law Enforcement Training Program, and the New York City Transit Police, among others.

He was the recipient of a number of honors. The French government awarded him the Palmes Académiques in 1978; he received the Italo Ponterotto Memorial Award in 1989, for contributions to the development of foreign language pedagogy; Dartmouth conferred the Robert A. Fish Award on him in 1997; and in 1998 he was named New Hampshire Professor of the Year from the Carnegie Foundation for the Advancement of Teaching. He was an adopted member of the Dartmouth classes of 1949 and 1976.

National recognition came in 1978, when he was the only language instructor appointed to President Carter’s Commission on Foreign Language and International Studies, where he also chaired the writing team that drafted the commission’s final report.

At Dartmouth, he founded the Rassias Center for World Languages and Cultures and, with the Center, became one of the founding partners of the Inter-American Partnership for Education, a Clinton Global Initiative.

His colleagues and students will remember his perpetual optimism and curiosity. In his trademark suspenders, he was a familiar face on campus, and for a number of years led the annual commencement procession to the Green. Whether cracking an egg on a student’s head to prove a point of literature or throwing paper balls across a classroom, Rassias made learning languages logical, lively, and above all, fun.

He was predeceased by his wife, Mary Evanstock Rassias, who died on July 10, 2012. The couple had been married for 57 years. Mary and John Rassias always made room at their dinner table for Dartmouth students and many other visitors.

Calling hours will be held at the Rand-Wilson Funeral Home in Hanover from 6 to 8 p.m. on Thursday, Dec. 10. A funeral service will be held at 11 a.m. on Friday, Dec. 11, at Rollins Chapel on the Dartmouth campus. A private burial for the family only will take place immediately after the service.

A reception and celebration of the life of Professor Rassias will be held after the funeral at the Hanover Inn. 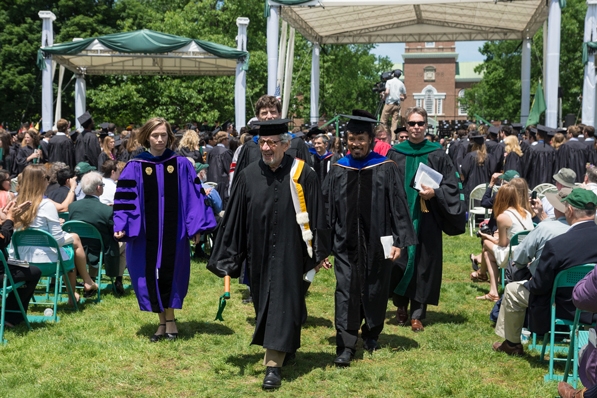 Professor John Rassias leads the faculty off the Green at the conclusion of commencement in 2013. (Photo by Eli Burakian ’00)
Written by
Office of Communications
Share this
FacebookTwitterEmail
In the News