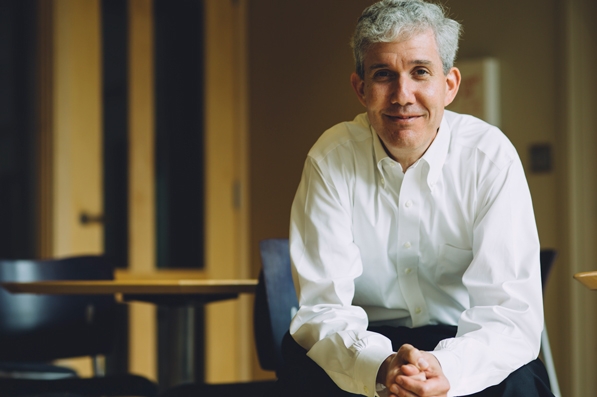 Read the full story by Jeff Moag, published by the Tuck School of Business.

Matthew Slaughter, the 10th dean of Tuck, is seeking to expand the school’s leadership role in furthering business as a force for good in the world.

Late on a Monday afternoon three weeks into the first academic term of his deanship, Slaughter is going strong. The new dean of the Tuck School of Business has recently finished teaching a class of high-level executives in Tuck Executive Education’s Global Leadership 2030 program and the exchange of ideas seems to have stoked his characteristic high energy. When our conversation turns to the role of business in an increasingly global economy, though, his enthusiasm rises to another pitch.

“What is remarkable over the 20th century in particular is how market forces have been the primary driver of increasing standard of living and jobs and opportunity for literally billions of people on the planet,” he says, “especially more recently with the accession into the global economy of both India and China.”

This is a favorite topic of Slaughter, a globalist who seeks to expand Tuck’s leadership role in furthering business as a force for good in the world. He continues in animated tones, with a baseline of scholarly reserve. After all, this is no ideological performance; Slaughter, a registered political independent, is simply describing trends that his research has documented over the last 20 years, and how they relate to the institution he’s served throughout his professional life.

The world is yearning for wise and effective business leaders, he says, and Tuck is uniquely suited to develop them. “We’ve been very fortunate with the strengths of Tuck over the years. We already have a number of inspiring graduates around the world who are doing well by doing good,” Slaughter says. “I’m very excited and honored by the prospect of continuing that at Tuck.”