U.S. Sen. Bernie Sanders, speaking Thursday night at Dartmouth to one of his biggest New Hampshire crowds since he entered the Democratic presidential primary race, declared that he was a fringe candidate no more. 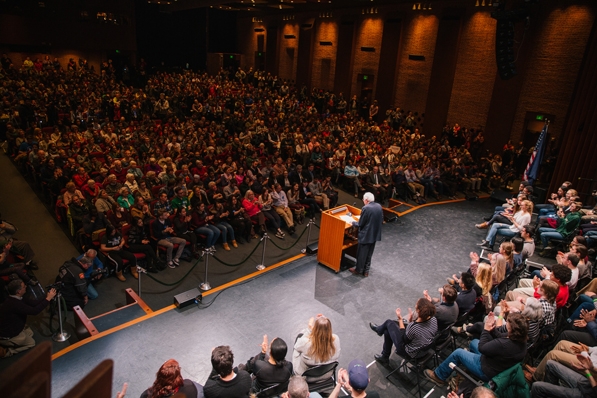 “When we began we had no money, no organization, and very little name recognition. Other than that we were in pretty good shape,” Sanders said.

“And we were running against a candidate called the inevitable Democratic nominee,” he said.

“A lot has changed,” he shouted, prompting an eruption of cheers from the boisterous crowd in Spaulding Auditorium.

Sanders’ appearance, hosted by the Nelson A. Rockefeller Center for Public Policy and the Tuck School of Business, attracted nearly 2,000 people, with Spaulding and an overflow area in Moore Theater filled to capacity and hundreds more mingling in a festival atmosphere outside.

With less than a month to go before the vote in New Hampshire, polls show Sanders and Hillary Clinton in a tight battle to win the first-in-the-nation Democratic primary.

In a press conference before the Dartmouth event, former U.S. Sen. Paul Kirk of Massachusetts, past chair of the Democratic National Committee and a Kennedy family confidant, endorsed Sanders.

In his introduction of Sanders in Spaulding later, Kirk said the Vermont senator is the only candidate who will take on the broken campaign finance system that enables “unlimited torrents of funds from the super wealthy to poison the politics of our democracy.”

Sanders told the crowd that before he entered the race, the political establishment considered him a radical fringe candidate who wouldn’t go far.

“You want a radical idea? How about an economy that works for the middle class rather than a handful of billionaires,” Sanders boomed over cheers as supporters waved signs reading “Enough is Enough” and “Feel the Bern.” 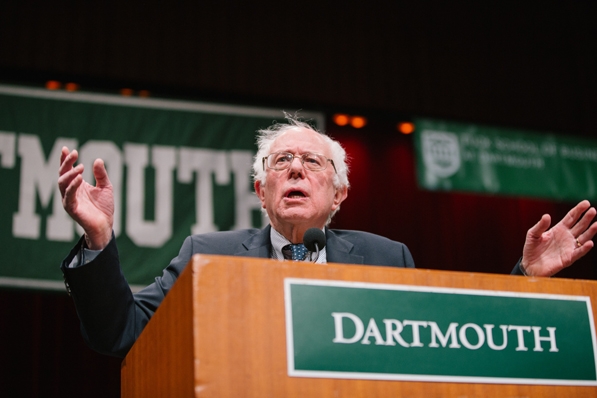 A lot has changed,” Sanders shouted Thursday night, prompting an eruption of cheers from the crowd in Spaulding Auditorium. (Photo by Robert Gill)

Speaking for more than an hour and a half, Sanders called for a single-payer universal Medicare system to replace all private insurance, a national $15 an hour minimum wage and three months of paid family leave for all, police reform, and the decriminalization of marijuana.

“Here’s another radical idea. Maybe, just maybe, we should be investing in jobs and education for our young people, not jail and incarceration,” he said.

He told the audience that all these changes depend on their commitment to vote in the primary.

“On Feb. 9, the eyes of the nation, and the world, will be on New Hampshire. If they vote for change, I see a path to victory,” Sanders said.

Ebenezer Bulcha ’19 got into line for the event five hours before the doors opened so he could get a seat on the risers set up on the stage behind Sanders. He is a registered New Hampshire voter and he said he would cast his first-ever ballot for president for Bernie Sanders.

“It was an incredible experience to be on the stage with him. Just seeing him in person and hearing his take on the issues and how his agenda aligns with mine, it adds a lot and makes it a lot more real,” Bulcha said. “I definitely feel the Bern.” 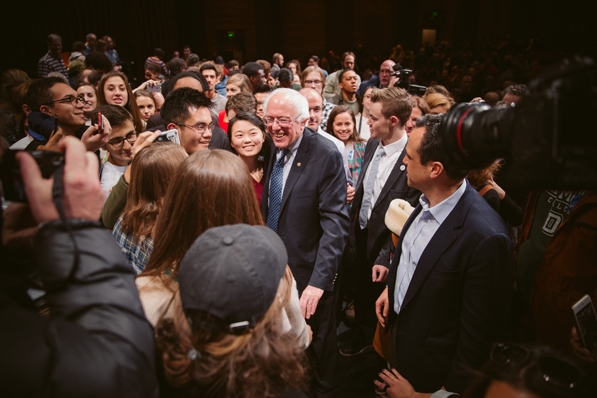 Sanders greets students and other members of the community after the event. (Photo by Robert Gill)
Written by
Bill Platt
Share this
FacebookTwitterEmail
Articles