Three days a week, at about 8 a.m., a car pulls up behind the Class of 1953 Commons. A couple of students jump out and rush through a red door. A few minutes later they emerge, toting plastic boxes of food—maybe meat and potatoes or, on some days, more exotic fare like coconut chicken or fish with mango sauce. Sometimes they also collect surplus from the Tuck School of Business dining hall. The students aren’t scavengers. They’re “food Samaritans” taking the day’s haul to a nonprofit agency serving homeless and hungry people in White River Junction, Vt. 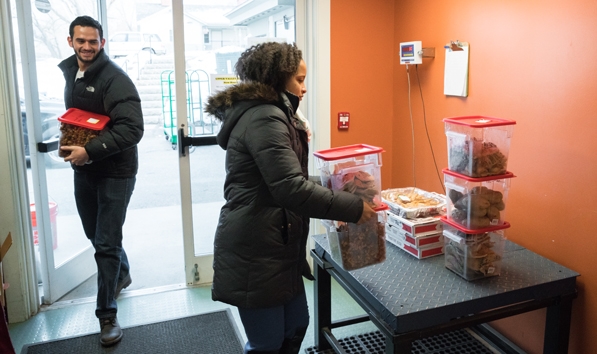 The volunteers belong to a student organization launched two years ago called Dartmouth Feeding Neighbors. Founder Adam Charnin-Aker ’16 hatched the idea one night after stopping by a local fast food restaurant after the kitchen and cash registers had shut down. A cashier told him he could just take some leftovers for free.

“They just told me that all that food just gets tossed and it’s not donated to anything. And it got me thinking about how food insecurity is an important issue in the Upper Valley. So I applied that to Dartmouth dining halls and got it rolling to the point where we were allowed to collect their leftover food,” says Charnin-Aker. By “leftover,” he doesn’t mean scraps or dusty canned goods. It’s usually freshly made food and it quickly lands, often still warm, at the Upper Valley Haven in White River Junction.

He teamed up with the Haven, an agency that helps more than 10,000 people every year find shelter, food, and social services. Charnin-Aker, who comes from Arizona, quickly learned that the area surrounding his college town includes pockets of poverty. 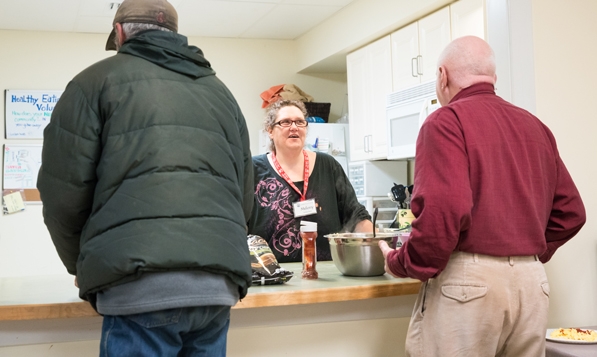 Kitchen volunteer Melony Morse talks with diners at the Haven. “Anybody is welcome to come in during the day and get some coffee, maybe peace of mind and a little camaraderie,” says Morse. (Photo by Eli Burakian ’00)

“It’s amazing how people in this community so close to campus really need the food, so we really want to help them. You don’t see food insecurity in Hanover very often but it‘s here and it’s nearby,” he says.

A government major and member of the baseball team, Charnin-Aker needed help. So he began recruiting other students to ferry food to the Haven’s all-day cafe. Since February 2014, he says, 75 student volunteers have delivered over 17,000 pounds of surplus.

On a recent cold day, he was joined by Dartmouth Feeding Neighbors newcomer Simone Schmid ’17, who is from Kansas City, Mo.

“I’ve been around a lot of cities, including New York, and you see homeless people everywhere,” Schmid says. “It’s in your face. But even here, where it’s not quite as in your face, I know there’s still a need for it in the community. So I thought this was a prime opportunity for me to be able to be involved.”

Schmid thinks the givers benefit as much from this program as the receivers because the students learn, away from their comfortable dining halls, what life is like for less fortunate people.

“It is so important to be outside of yourself, and I think the culture is so individual nowadays—there’s less of an idea to give back to other people … so I definitely want to make that a goal. To give back,” says Schmid.

On a recent January morning, Schmid shows up with Charnin-Aker as tables at the Haven cafe fill up with guests eager for scrambled eggs, coffee, and whatever else shows up on the menu. The Dartmouth side dishes—warm pizza and pancakes—disappear fast. One diner, wearing a wool stocking cap, has an old, weathered face. Another, wearing a sweatshirt, looks younger but gaunt and tired.

“Some of them stay in the warming shelter at night, and they have to leave at 7 a.m. But they come back here for hot food when we open at 8:30,” says kitchen volunteer Melony Morse. “Anybody is welcome to come in during the day and get some coffee, maybe peace of mind and a little camaraderie.” 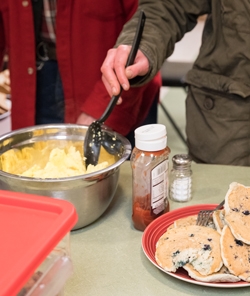 Some of the food items brought from the College cafeteria are still warm when they arrive at the Haven. (Photo by Eli Burakian ’00)

The Haven’s volunteer coordinator, Amber Johnston MALS ’12, says Dartmouth’s sometimes-elegant edibles help make the daily diners feel welcome and well treated when they walk in the door. And once students deliver food to the cafe, they often find other ways to be of use at the Haven. “About 20 Dartmouth students volunteer each term in a number of our programs,” Johnston says.

Those helping hands come not only from Dartmouth Feeding Neighbors, but also from the Center for Service, which provides after-school tutors for children living in family residences, as well as cooks who prepare meals at the Haven’s Hixon House for single adults. The center also provided start-up funding and advice to Feeding Dartmouth Neighbors. The Haven gets money directly from another Dartmouth group: Several times a year, volunteers from the William Jewett Tucker Center’s Hillel bake hundreds of loaves of challah as a fundraiser to support Haven programs.

Jennifer Fontaine, the Haven’s director of community services, sees the food that comes from Dartmouth as an acknowledgment that the College understands that poverty exists not far from campus. “I think it’s hard for all of us to imagine how many people really need food, and this makes it a little more tangible for people to understand that,” Fontaine says.