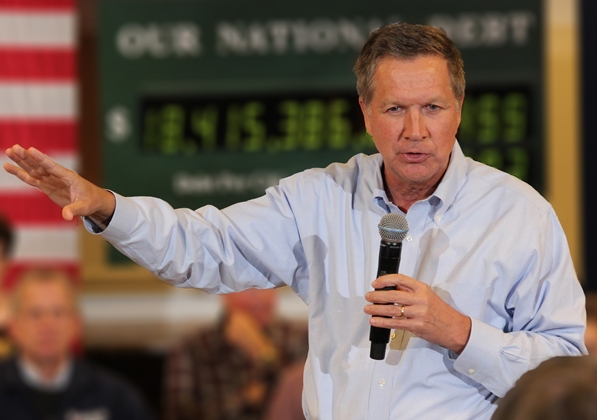 Republican presidential candidate Gov. John Kasich returns to the College on Monday, Jan. 18, to participate in the “America’s Economic Future” candidates’ series sponsored by the Tuck School of Business and the Nelson A. Rockefeller Center for Public Policy and The Social Sciences.

Former New Hampshire Gov. John Lynch, a senior fellow at Tuck’s Center for Global Business and Government, developed the series to offer Dartmouth students opportunities to interact with presidential candidates and to experience the kind of retail politics that New Hampshire’s first-in-the-nation primary is famous for, he says.

With just under a month to go before the New Hampshire primary, polls show Kasich is in a close race with Sens. Marco Rubio and Ted Cruz for second place in New Hampshire behind frontrunner Donald Trump. This will be the second Dartmouth visit for Kasich, who appeared here in October at a campus taping of the cable news show Morning Joe.

Kasich will speak for 10 to 15 minutes followed by a town hall discussion. The event runs from 3:30 to 4:30 p.m. on Monday in the Georgiopoulos classroom of Tuck’s Raether building. Entry will be first come, first served, with some reserved seating for students.

Lynch has invited all of the Republican and Democratic primary candidates a chance to discuss their economic ideas and join him for a one-on-one conversation, and a number of them took him up on the offer, including Hillary Clinton, Lindsey Graham, and George Pataki.

The College has long been a stop on the New Hampshire primary campaign trail and has seen a wide range of candidates during this cycle, including Govs. Martin O’Malley and Chris Christie and representatives of the Marco Rubio campaign. Sen. Bernie Sanders will also be on campus this week.

Description
Ella Bell Smith, a professor of business administration, talks in a podcast interview about getting feedback at work. “When you check the box, always let people know you checked the box,” she says.
Harvard Business Review