Kasich Returns to Dartmouth as GOP Primary Heats Up

Speaking at the Tuck School of Business Monday, Republican presidential hopeful John Kasich highlighted his work balancing budgets as a U.S. congressman and as governor of Ohio, saying that a knack for reaching across the aisle is the key to his success. 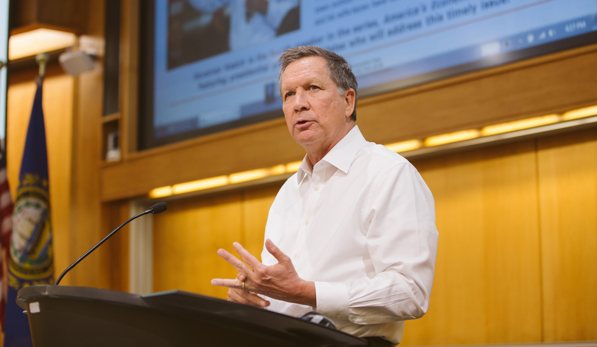 Gov. John Kasich of Ohio speaks at Dartmouth Monday as part of the “America’s Economic Future” series, sponsored by the Tuck School of Business and the Nelson A. Rockefeller Center for Public Policy. (Photo by Robert Gill)

“When I was chairman of the House Budget Committee, we cut debt by half a trillion dollars,” Kasich said. “This is what I know: Democrats love to spend; Republicans spend, they just feel guilty when they do it. You have to have someone to stand in the breach.”

Kasich spoke to a crowd of about 200 as part of the “America’s Economic Future” series, sponsored by Tuck and the Nelson A. Rockefeller Center for Public Policy.

It was Kasich’s second visit to Dartmouth since he joined the Republican primary contest. He made his presidential campaign pitch and answered questions from Dartmouth students during a campus taping of the cable news show Morning Joe in October.

With three weeks to go before New Hampshire voters go to the polls in the first-in-the-nation primary, Kasich has scheduled dozens of campaign stops, media interviews, and appearances across the Granite state. Some recent polls show Kasich gaining in the GOP primary race for second place with U.S. senators Ted Cruz and Marco Rubio, behind frontrunner Donald Trump. 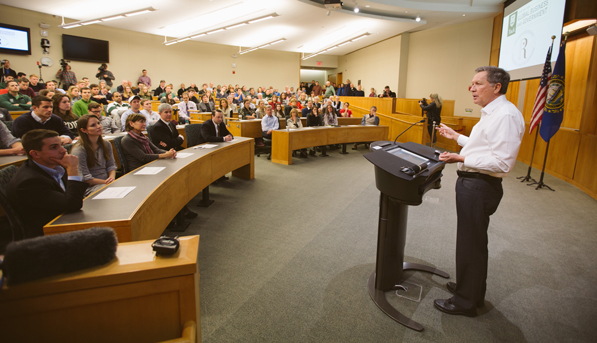 Students and area residents asked Kasich to explain his position on a range of issues, from climate change to entitlement reform and health care coverage. The Ohio governor often turned to the example of policies and programs in his home state.

He said Ohio has added 385,000 private sector jobs during his tenure as governor; the state has turned a $3 billion operating budget deficit to a $2 billion surplus; Ohio’s employee pension fund is solvent; the legislature has cut taxes; and the state’s credit rating is excellent.

“But we also have devoted a significant amount of time and resources for the mentally ill, the drug addicted, the working poor, the developmentally disabled, and the members of the minority community,” he said.

“I’m a believer that we need to solve these problems in our country, and as we grow our economy it is critical that we don’t leave anyone behind,” he said. “But we can’t accomplish this if all we are is Republicans and Democrats. We’re Americans before we are anything else.”