A Memorial Service for Tate Ramsden ’17

At  7:30 p.m. Saturday, Jan. 23, the Dartmouth community is invited to celebrate the life of Tate Ramsden ’17, who died suddenly last month while on vacation with his family in Florida.

Friends, faculty, and staff will offer remembrances in a service at Rollins Chapel, to be followed by a candle-lighting ceremony on Baker Lawn and a reception at Collis Common Ground at 9 p.m. 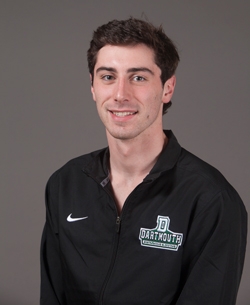 Tate Ramsden ’17 competed for Dartmouth on the varsity swimming and diving team. Head coach Jim Wilson described Tate as “a dedicated and talented athlete, and a fine student.” (Photo by Tom McNeill)

“The service is going to be an amazing celebration of a life lost far too soon,” says Reilly Johnson ’16, Ramsden’s girlfriend, who, along with Joseph Geller ’16, David Harmon ’17, Jorge Siwady Kattan ’17, John Long ’17, and Timo Vaimann ’17, is helping to organize the memorial.

“I hope that hearing the voices of those who loved Tate so unbelievably much at the service will help provide some healing to the Dartmouth community,” Johnson says.

Originally from Nashville, Tenn., Ramsden competed for Dartmouth on the varsity swimming and diving team. “We have a really tight group of swimmers in the ’17s, like a family away from home, and Tate was probably the biggest part of it,” says Vaimann, one of Ramsden’s teammates.

On a message posted on the swim team’s website, head coach Jim Wilson describes Tate as “a dedicated and talented athlete, and a fine student.”

“Our team is devastated,” Wilson’s message says, “but we will remember Tate’s friendship, determination, and generosity in this tough time. We will all miss him very much.”

“I’ve said that Tate was my best friend—but at the same time he was a best friend to so many people on campus,” Vaimann says. “He was always there for you. He put his friends and family first, and really cared about all his friends.”

Ramsden was majoring in economics at Dartmouth, but was also deeply interested in literature, Native American studies, and art.

“He truly was an extraordinary person, friend, and brother,” says Nathan Zhu ’17, a close friend of Ramsden’s and a member of the same fraternity, Beta Alpha Omega. “He cared about the people he loved, and I think this sustained him. I hope that I can adopt his simple and rewarding mindset and that I can continue to live my life in the same way he lived his.”

Johnson describes helping Ramsden’s mother go through his things. “We came across a paper written in his handwriting that was titled ‘Goals.’ Some of his day-to-day goals included things like ‘limit sarcasm,’ ‘be a better listener,’ ‘think before you speak,’ and ‘be kind to everyone; you never know what kind of a day they may be having.’ ”

“Who would do that?” asks Vaiman. “Like make a list of how to be a better person—not many people just take a minute to stop and think about that. I think that speaks to who he was.”

Faith was an important component of Ramsden’s life. In his personal bible, friends say, he had inscribed the words, “May this light shine the brightest when it is the darkest,” and highlighted a number of passages that resonated with him. Some of these passages will be shared during the service.

Vaimann and several class- and teammates traveled together to Nashville for a memorial earlier this month with Ramsden’s family. “It was amazing to see how all those communities got together—his swim team friends from Nashville and Dartmouth, his friends from Dartmouth, his Beta brothers, family friends. It was just so beautiful and unifying to be able to talk to all these people about Tate. I think at Dartmouth there will be a similar effect.”

The Rev. Nancy Vogele ’85, director of Religious and Spiritual Life at the William Jewett Tucker Center, has been helping the student organizers plan Saturday’s service. “The purpose of the service for the wider community is to allow us to have a time to grieve—but also a time to celebrate this remarkable young man who was such a good friend and such a faithful person, and so full of life and exuberance.”

“I think it’s important not to grieve alone,” Vogele says. “Reaching out to one another helps us move through our grief. It doesn’t necessarily take it away ever—and yet it helps to come together.”