The 21-year-old had a talent for languages and deep roots at Dartmouth. 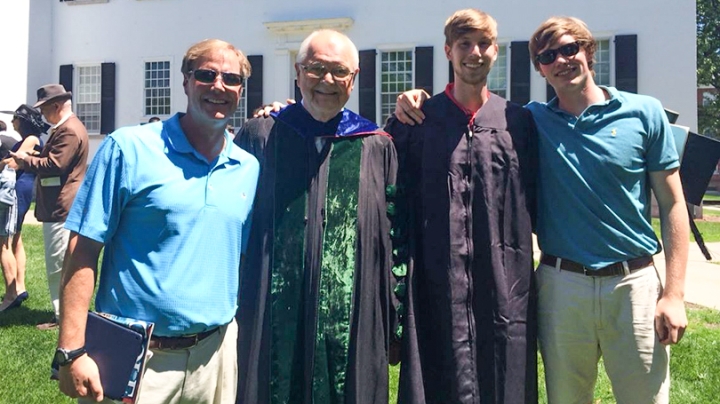 Friends, classmates, and loved ones of Adam Wright ’17 have organized a service in his honor, to be held after classes resume next week. Wright, 21, died suddenly in Hanover on Jan. 30, 2017.

The service will take place on Tuesday, March 28, at 5:30 p.m. in Rollins Chapel, with a reception to follow at the Top of the Hop in the Hopkins Center for the Arts.

Erin Mulrooney ’17, who met Wright in a first-year French class and later studied with him in the French Foreign Study Program in Paris, says a group of his close friends began meeting in February “to think about how we could pay tribute to him on behalf of everyone who knew him here.”

“Adam was such a loved member of the Dartmouth community. We hope to share the spirit of his warmth and generosity and to keep this feeling with us for a long time,” Mulrooney says.

George Niedermayer ’17, one of Wright’s Beta Alpha Omega fraternity brothers, is another of the memorial organizers.

“Of course this moment is profoundly sad, but that is not who Adam was. He walked about with the goofiest smile and was always trying to brighten up your day. The least we can do is remember him in that light and try to honor his memory, moving forward with happiness and love,” Niedermayer says.

Wright is survived by his parents, James Wright, Tuck ’93, and Carreen Wright of Berwyn, Pa.; his brother, Zachary Wright ’15 of Philadelphia, Pa.; grandparents Joan Smith of New Haven, Conn., Tom Dodd and Sass Dodd of Charlestown, R.I., and Susan DeBevoise Wright and President Emeritus James Wright, of Hanover. Adam Wright’s grandmother Susan DeBevoise Wright served Dartmouth for more than 30 years in the Office of the Dean of the College and the Montgomery Endowment. Wright’s grandfather James Wright was a longtime history professor and the 16th president of Dartmouth.

President Wright says the family has been touched by the outpouring of love and support they’ve received from Adam Wright’s friends, classmates, professors, fraternity brothers, co-workers, and many others from across Dartmouth. The service at Rollins Chapel will offer an opportunity for friends to comfort one another, he says.

Adam Wright majored in government and was president of the International Business Council, a student organization at the John Sloan Dickey Center for International Understanding. He was a member of the Dartmouth Humanitarian Engineering Group and a loyal member of the Beta Alpha Omega fraternity.

He also had a talent for languages, mastering French and Spanish by the time he graduated from high school. He was studying Japanese this year at Dartmouth, and planned to travel to Japan after graduation to learn the language over the summer, before beginning work at a job at an international business consulting firm in New York City.

“He explained his interest in Japanese by saying, ‘Everyone says it’s the hardest language, so I thought I’d like to take it on,’ ” President Wright says. “He really had a natural talent and he enjoyed it.”

The March 28 memorial service will begin with a welcome from Rabbi Daveen Litwin, chaplain of the William Jewett Tucker Center for Spiritual Life, followed by a reflection by Provost Carolyn Dever. Friends from the community will offer memorials and then Adam Wright’s father, Jim Wright, and grandfather, James Wright, will speak. Wright’s Beta brothers will lead the group in the song Dartmouth Undying at the close of the service.

In lieu of flowers, donations can be made in Adam’s memory to the Adam Wright ’17 Memorial Fund at Dartmouth College. The family is working with the College to create a tribute to Adam Wright, to be determined at a later date. Gifts can be sent to: Dartmouth College, Gift Recording Office, 6066 Development Office, Hanover, N.H. 03755