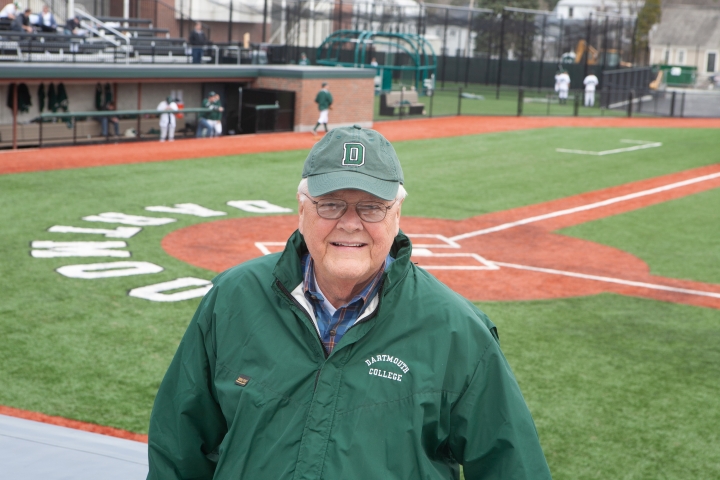 For more on the legacy of James Wright, visit a Dartmouth News collection of stories, photos, and videos.

James Wright Over the Years

President Emeritus James Wright, a Marine Corps veteran who worked his way through college as a powderman in a lead mine, served as Dartmouth’s 16th president from 1998 to 2009, and went on to make it possible for thousands of military veterans who served in Afghanistan and Iraq to earn their college degrees, died at his Hanover home on Monday. He was 83 and had been undergoing treatment for cancer.

“Few individuals in Dartmouth’s history can be said to have had more impact on this campus than Jim Wright in the past half-century,” says President Philip J. Hanlon ’77. “As a dedicated scholar-teacher, his work has touched literally thousands of students. As an administrator and leader, he shaped the institution we know and love today for over a decade. And in recent years, his tireless advocacy for America’s military veterans has received national and international recognition and helped create a more welcoming environment for veterans here at Dartmouth.”

“Throughout my own tenure as president, Jim proved himself to be an invaluable mentor and adviser,” President Hanlon says. “I am deeply saddened to lose such a sage ally and friend. My heart goes out to Susan, their children and grandchildren, and to all of their family and friends.”

As a dedicated scholar-teacher, his work has touched literally thousands of students. As an administrator and leader, he shaped the institution we know and love today for over a decade.

President Hanlon notified the community of Wright’s passing in an email today.

Known for his sonorous voice and his ability to remember former students even decades later, Wright grew up in the working-class community of Galena, Ill., which he described in an interview in the Dartmouth Alumni Magazine as “a community where most people did not think about going to college.”

As a young man, becoming an Ivy League president was not an ambition on his radar. “I assumed after I graduated from high school I would probably go to work in the mines or the Kraft Foods cheese plant nearby or the John Deere Dubuque Works in Iowa, across the river,” he told the magazine.

Instead, he enlisted in the U.S. Marine Corps at age 17 and deployed to Japan during the Second Taiwan Strait Crisis of 1958. After his service, he returned to Galena with the idea of becoming a high school history teacher and enrolled in the nearby University of Wisconsin-Platteville, where he earned his bachelor’s degree.

He worked his way through college with various jobs, including as a janitor, nightwatchman, bartender, factory worker, and as a powderman in the local zinc and lead mines, detonating dynamite and trimming the jagged rocks that remained after the explosions with a 20-foot iron bar. (Throughout his career he kept a chunk of lead on his desk as a reminder of where he came from.)

With the encouragement of faculty mentors at Platteville, he earned a graduate fellowship to the University of Wisconsin-Madison, where he studied the political history of the American West, writing his PhD dissertation on populist movements in Colorado.

As luck would have it, as he was finishing his doctoral degree in 1969, Dartmouth’s history department was looking to hire. Wright took the job and relocated to Hanover.

The 1970s were a period of intense change at Dartmouth as the College admitted women for the first time, began to diversify its student body, and rededicated itself to its founding mission of educating Native American students. Even as an untenured assistant professor, Wright was in the thick of it: Early on, he was tapped to co-chair the ad hoc Committee on American Indian Studies that recommended the creation of the Native American Studies Program, which was launched in 1972. And in 1978, he chaired the Committee on Curriculum and Year-Round Education, which evaluated the newly adopted quarter system, known as the D-Plan, which is now the cornerstone of the undergraduate experience.

In the 1980s and 1990s, he took on a variety of administrative roles: associate dean of the faculty, dean of the faculty, acting provost, provost, and acting president for a year when then-President James Freedman took a sabbatical. In 1984 he married an assistant dean named Susan DeBevoise, a Vassar graduate from Montclair, N.J.

During that time he was also a prolific scholar, writing or editing five books, including The Galena Lead District: Federal Policy and Practices, 1824-1847; The West of the American People; The Politics of Populism: Dissent in Colorado; The Great Plains Experience: Readings in the History of a Region; and The Progressive Yankees: Republican Reformers in New Hampshire and receiving a Guggenheim Fellowship, a Social Science Research Council Grant, and a Charles Warren Fellowship at Harvard.

As the alumni magazine noted in 1998, when Wright was selected as Freedman’s successor after a national search, “Few people in the College’s modern era have been as deeply involved in its operation.”

As president, he launched the Campaign for the Dartmouth Experience, which raised more than $1.3 billion—then the largest campaign goal in Dartmouth’s history. The funds supported financial aid, an expanded faculty, and programs aimed at strengthening the College’s intellectual life, and constructed facilities—including, among others, Dartmouth Library’s Berry Library and Rauner Special Collections Library; Kemeny Hall and the Haldeman Center; the MacLean Engineering Sciences Center; Floren Varsity House; and residence halls in the McLaughlin Cluster, Fahey Hall, and McLane Hall—that helped bring Dartmouth’s campus into the 21st century while retaining its distinctive scale and sense of place.

He never forgot his roots in the Marines, and in 2005, Wright began a series of visits to U.S. military medical facilities to meet with wounded veterans, raising money for veterans education and lobbying Congress to create the so-called Yellow Ribbon Program to help private colleges and universities, including Dartmouth, partner with Veterans Affairs to support veteran students. 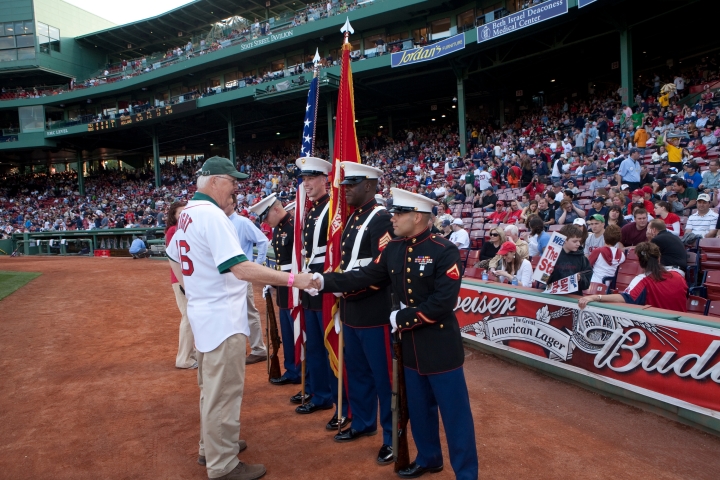 President James Wright greets service members at Fenway Park in June 2009, near the end of his tenure. The former Marine and longtime advocate for veterans threw out the first pitch. (Photo by Joseph Mehling ’69)

His work on behalf of veterans continued after he retired from the presidency in 2009. As the Eleazar Wheelock Professor of History, he published three more books, Enduring Vietnam: An American Generation and Its War (a finalist for the Dayton Literary Peace Prize); Those Who Have Borne the Battle: A History of America’s Wars and Those Who Fought Them; and War and American Life: Reflections on Those Who Serve and Sacrifice. He also penned numerous opinion pieces in The New York Times, Foreign Affairs, The Atlantic, and the Huffington Post on America’s wars and the nation’s responsibilities to its veterans.

His efforts were recognized nationally: He received the Semper Fidelis Award from the Marine Corps Scholarship Foundation, a commendation from Commandant of the Marine Corps General James Conway, the Commander-in-Chief’s Gold Medal of Merit Award and Citation at the 2009 convention of the Veterans of Foreign Wars, the Eleanor M. McMahon Award for Lifetime Achievement from the New England Board of Higher Education, the Secretary of the Army Public Service Award, and was invited to throw the ceremonial first pitch at a 2009 Red Sox game. His advocacy work was featured in The New York Times and on ABC World News with Charles Gibson, where he was named “Person of the Week.”

He was elected to the American Academy of Arts and Sciences, was a member of the Organization of American Historians and the Western History Association, served on the advisory board of the Marine Corps Scholarship Foundation, the advisory committee for the Iraq and Afghanistan Veterans of America, and the board of the Semper Fi Fund.

Recently, Dartmouth announced the creation of the Susan and James Wright Center for the Study of Computation and Just Communities. The center, funded by a gift from Sally and William H. Neukom ’64, is dedicated to advancing democratic, equitable societies through the use of computational techniques and innovations.

“As president, Jim was known for closing his annual convocation address to the incoming first-year class with the words, ‘We have work to do, you and I—and it is time for us to begin,’” President Hanlon says. “Jim Wright’s work continues as a legacy here at Dartmouth and beyond. And our work to live up to that legacy has just begun.”