Daniel Rockmore on the Beauty and Topicality of Math 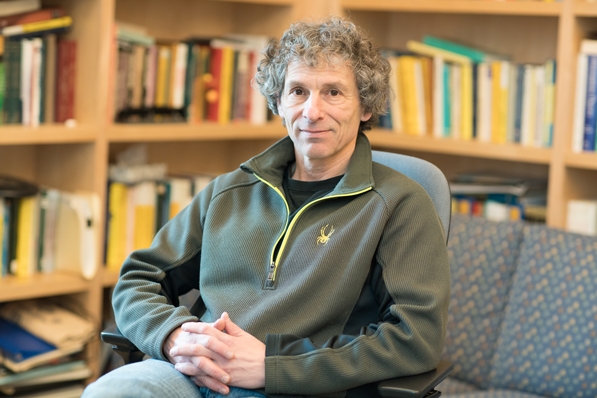 “In today’s quantified world, people should have some appreciation for what numbers are, what they can encode, because, like it or not, math is affecting your life,” says Professor Daniel Rockmore. (Photo by Eli Burakian ’00)

Daniel Rockmore is a professor of mathematics and the William H. Neukom 1964 Distinguished Professor of Computational Science, as well as director of Dartmouth’s Neukom Institute for Computational Science. His research interests include complex systems, network analysis, machine learning, and cultural evolution. He is a frequent contributor to The Huffington Post and author of, among other publications, Stalking the Reimann Hypothesis, a book about prime-number theory. He recently spoke with Dartmouth Now about why he likes to talk about math.

If I’m counting correctly, your given name is a prime number.
Is that really true?

Do you have any idea why I am thinking about your name as a prime number?
Because I wrote a book about prime numbers?

That’s one reason. The other is that I recently saw a play called The Curious Incident of the Dog in the Nighttime.
I saw that! I reviewed it for The Huffington Post.

Exactly.
Which was kind of funny, because that’s more than people talk about math, like, ever.

That’s a good segue, because your popular writing suggests that you crave to point out the beauty of math to a broad audience.
Writing those little essays makes me happy.

You’ve said you’re “a humanities guy who made a wrong turn.”
I enjoy words and I enjoy language. When people discover that you’re a mathematician, they put you in a particular kind of box—and not a great box. It’s like, “Well, I can’t talk to you about your work.” I don’t like that, because I like to talk to people.

You try to make math less rarefied, less remote.
I think that’s the impulse. But there’s also a professional impulse, which is that I always have enjoyed studying mathematics in and of itself, and I’ve always found it mysterious, confusing, beautiful at times, infuriating at other times, but something worth understanding in a broader sense. In today’s quantified world, people should have some appreciation for what numbers are, what they can encode, because, like it or not, math is affecting your life.

You’re looking at “big ideas,” I hear, with other faculty members.
Yes, for a long time, in collaboration with colleagues, I’ve tried to set up venues where the faculty could just come and talk. But the truth was that any lecture, as soon as the PowerPoint went up—it’s all lost, especially having a conversation. So we recreated it under a new name, “What’s the Big Idea?” The meta big idea was that a couple of faculty would just stand up, no slides, and speak for under 10 minutes.

What are the big ideas that particularly interest you?
Ideas are often big only in the eyes of the beholder. Machine learning is one of the huge subjects of the day. My own particular interests actually have to do with trying to study the evolution of culture.

That doesn’t sound like a mathematician’s job.
Well, I’m not proving theorems (laughs). My biggest current project centers on legal texts and trying to understand the evolution of the law as left in the fossil record.

So you hope to derive an understanding of how some of the great legal minds used language to express cultural values?
One of the questions that we are able to address is the influence, or lack thereof, of clerks. How influential are clerks in the writing of opinions? Because we’re interested in this notion of influence, we have a way of throwing these documents into geometric space, so you could think of every document as being a star in a galaxy. Some documents have more gravity than other documents, so they attract ideas close by them, or they are on the fringe of the space. We combine tools of probability, computing, and geometry to create a space of documents that we can traverse and characterize its curvature and its mountains and its valleys.

You’re running a competition.
You mean the Turing Test (testing whether an algorithmic response generated by a computer is indistinguishable from a human response).

Yes, to see whether a computer can write a sonnet, short story or compose music. What do you expect?
I wouldn’t be surprised if somebody passes the Turing Test with a sonnet. The short story is going to be complicated. It’s not hard to automatically construct a sentence. But narrative is the tricky part.

So how close are we to having computers indistinguishable from humans?
Well, it will happen.

Professor Andrew Hacker of Queens College has suggested that students need not take math after 10th grade. Do you agree?
I don’t know anybody who’s ever been hurt by knowing too much math.
Knowing the quadratic formula is like knowing Ode on a Grecian Urn, right? If you’re educated, you should know what the quadratic formula is.

If you could pick the brain of a mathematician or a scientist, living or dead, who would it be?
Oh, John von Neumann. Oh my god, he was amazing. There are no polymaths left.

Where are the polymaths these days?
This is the thing: There used to be giants. I could be wrong, but no one will write a history about Mark Zuckerberg or Bill Gates or Warren Buffett that reads like von Neumann’s.

Do you agree with Freeman Dyson, who said: “Technology is a gift of God. After the gift of life, it is perhaps the greatest of God’s gifts. It is the mother of civilization, of arts and sciences.”
Wow. Well, where do you start?

Let’s simplify the question. Are you a techno-optimist, pessimist, or agnostic?
I think it’s a question of vigilance. Nothing is for free. I think that with respect to technology, we’ve been slow on the uptake. Interestingly enough, John Kemeny was one of the first people to think about it in a sort of serious, philosophical way.
As soon as people understood the notion of a gene and what a gene could do, the ethicists were all over it. But where were the ethicists when the first computer game was created? I think people have been surprised, actually, by how much computers have changed what it means to be human.