Elsa Garmire on Her Groundbreaking Career in Engineering

Elsa Garmire, the Sydney E. Junkins 1887 Professor of Engineering, retires this year after 21 years at Thayer School of Engineering. Elected to the American Academy of Arts and Sciences, the National Academy of Engineers, and the National Academy of Inventors, she helped pioneer laser technology and is an expert in nonlinear optics. Trained as a physicist at a time when few women entered the field, Garmire spoke with Dartmouth Now about physics, metaphysics, and her trailblazing career. 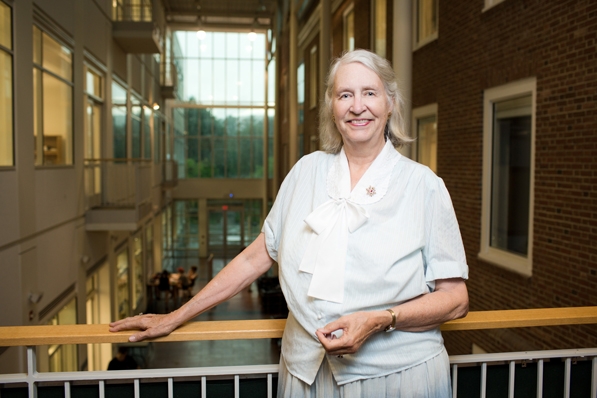 Professor Elsa Garmire will retire this year after 21 years at Thayer School of Engineering, including two years as the school's dean. (Photo by Rob Strong ’04)

You’ve said you studied physics to better understand how the world works but soon discovered that physicists weren’t likely to find the answers.

Talk more about the connection between physics and God.

I definitely have a feeling of spirituality that is not tied to any particular religion, but I feel that humans, the Earth, the universe—we’re all connected, however it is that we’re connected.

And has your understanding of physics informed that belief?

Well, my latest thought is that since we’ve discovered there’s dark energy and dark matter and we don’t know what those are and they’re 90 percent of the universe, maybe that’s where our connection is.

There’s a lot we don’t know.

There’s a lot we don’t know. Right. Probably put a better way is that I thought that studying physics would lead to answers.  But I found out that in every area of physics, the more you look, the more questions there are. Nothing is fully understandable. I thought if I’m going to put all my energy into something, let me put it into something that will benefit mankind.

The arc of your career has been remarkable, in part because so few women pursued physics or engineering in the mid-1960s.

My career has been very transitional. I grew up in the 1950s with very much a ’50s mentality. My personality has gone through all the changes of each of the decades we’ve had. Now, well, I’m mature and have found peace with who I am.

You were there at the beginning of the development of lasers, studying at MIT with Nobel Laureate Charles Townes.

It happened purely by chance that I was his first student at MIT. At the time I did not consider myself a good student, but I can look back and realize that I started in an empty lab and really did put it together from scratch. I must have been pretty good if I did that. I’m sure there are people who would have failed, so I have to give myself a little bit of credit.

On the other hand, having worked with a Nobel Prize winner, I can tell you: I ain’t nearly as smart as he was!

I’m interested in your patent for a technology that uses lasers to remove graffiti.

That’s the only patent that’s ever made me any money! The technology was ultimately used by a company to remove paint from aircraft, but it doesn’t do what I had wanted, which was to get rid of graffiti. In Europe, they accept graffiti as street art, and it can be very attractive if you look at it from that point of view.

During an earlier phase of your career, you experimented with lasers to make art, not destroy it.

Yes, yes, yes. The first artist I ever met was Robert Rauschenberg. He came to visit my lab at Caltech. Here I was, sort of shaking at the idea of meeting this famous artist, and he said, “Feel my hands.” His hands were ice cold. He said, “I’m so afraid being here, meeting somebody working with lasers.”

Perhaps Rauschenberg was reacting to you, not to the lasers. You’re a tall and imposing woman. How tall are you?

Did your commanding height help you forge ahead in a man’s world?

I have talked to people about this. I think image definitely has had an impact on me, mostly positive. I’m very fortunate that my father supported me very much. He was 6 foot 6. I recently found a copy of a letter that he sent to Harvard when I was a freshman there. Parents were asked to describe their son or daughter. I was interested that my father talked about my height and said how he had worked so hard to make sure that I was proud of it.

And yet you say you initially lacked self-confidence in the lab at MIT, where you were one of only two women pursuing a PhD in physics.

The very first time I ever gave a talk, I used my first initial because I didn’t want anyone to know I was a woman. I was still a graduate student. “The talk will be given by E. Garmire,” said the man who introduced me. I stood up and he said, “Oh, I see we’re having a beautiful young woman here to give a talk.” That’s the way it was in those days.

The memory seems to amuse rather than annoy you.

I’m not angry at men. I remember once being compared with another woman in The Optical Society. Someone said I wasn’t as good a feminist as she was. I was really offended by that, because I consider myself an ardent feminist. It turns out he was using “feminist” to mean “man hater,” and he knew I didn’t hate men!

Lasers have had a huge impact — on science, medicine, art, the Internet and more. If you had to come up with another new technology that would significantly change the world, what would it be?

Well, I know what we need. We need decent batteries. We need decent ways to store energy. There are a lot of people working on it; eventually the problem will be solved.

Are you optimistic about the role of technology?

Oh, yes. In an ideal world, technology would enhance our lives and not destroy our culture. The problem is that a lot of 20th-century technology was developed by white men. For instance, I believe the violence of many computer games results from the testosterone of the young men who design them. Bringing in more women and minorities could reduce the downside of many engineering design projects.

You were recruited more than 20 years ago from the University of Southern California to be dean of Thayer School of Engineering — the school’s first female dean.

It was an interesting challenge. But I came without any management skills and was not the right person at the time for the job.

You were dean for just two years.

I decided that they might do better with someone else. At the time, Dartmouth was beginning to think of itself more as a research institution. There was a lot of turmoil. Who are we? What are we trying to be? People began to see that, yes, we could become known in research and it wouldn’t hurt the undergraduate program. I was one of the first people to think along those lines.

Has Thayer’s reputation for research improved during your tenure?

Absolutely, also in teaching. I’m proud to say that I think that our school is the best in the country, no question. I would like to think I had a little bit to do with that.

How do you feel about leaving Dartmouth?

The interesting thing about engineering is that if you’re good at it, you put yourself out of a job. The study of lasers is mostly complete. We made good lasers; they exist and work well. Now it’s an issue of looking at various applications, and my skills are out-of-date.

This is the time to retire.  I enjoy teaching. But my daughters have gotten me interested in coming back to California—my grandkids are now 10 and 5. And I do want to write a book about my experiences. I’ve already made a list of anecdotes: I’ve got at least 50. It will take me forever to describe them all!

I will surely miss all the friends I’ve made at Dartmouth—and the fresh young faces that appear each year.