Jake Tapper ’91 Views the Primary from the Green Friday

CNN anchor Jake Tapper ’91 will interview students and possibly some presidential candidates live from the Green Friday, Feb. 5, for his show, The Lead with Jake Tapper. 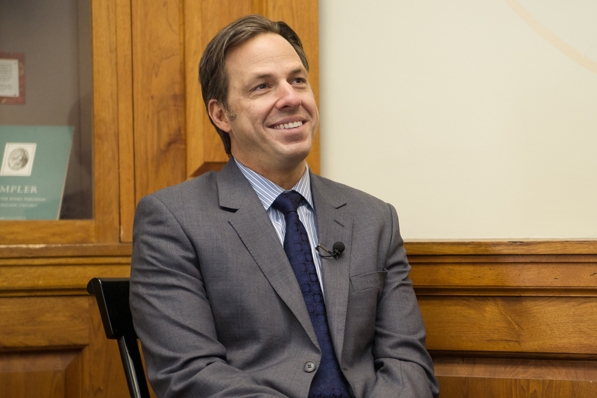 Jake Tapper ’91, a former cartoonist for The Dartmouth, will meet with students at Dartmouth’s Rockefeller Center earlier before the broadcast and will be on campus for much of the day Friday. (Photo by Eli Burakian ’00)

Tapper will broadcast his afternoon news show from a director’s chair on the Green in front of Baker-Berry Library from 4 to 5 p.m. In case of bad weather, the set will move to Hinman Forum in the Nelson A. Rockefeller Center for Public Policy.

“I’m so excited to be back in Hanover covering the primary. Having attended the George H.W. Bush/Bob Dole/Jack Kemp/Pat Robertson/Al Haig/Pete duPont debate at the Hop in 1988, I’m thrilled to be combining two of my great loves once again: Dartmouth and politics,“ Tapper said on Thursday afternoon.

Jake Tapper ’91 Talks About How Dartmouth Inspired Him

CNN’s Tapper ’91 Tells the Stories Behind ‘The Outpost’

The show’s producers were not able to say which candidates might appear, but with just days to go before the Feb. 9 New Hampshire primary, almost all the candidates will be crisscrossing the state through the weekend.

The Lead’s producers have also invited Dartmouth students to come out to watch the show and to share their opinions.

“We encourage students to come watch if they’d like—and they should feel free to show any political spirit they may have. We’re looking to take the temperature (pun intended) of New Hampshire’s voters ahead of the primary,” said The Lead’s public relations manager, Lauren Pratapas.

Tapper, a former cartoonist for The Dartmouth, will meet with students at Dartmouth’s Rockefeller Center at 11 a.m. and he will be on campus for much of the day.

Tapper, who also hosts CNN’s Sunday morning newsmaker interview show, State of the Union, moderated the first Republican presidential debate. He has been a Washington reporter for more than 14 years and his 2012 book, The Outpost: An Untold Story of American Valor, debuted in the top 10 on The New York Times bestseller list.