The CNN anchor speaks with students and fellow alumni on a Rockefeller Center broadcast. 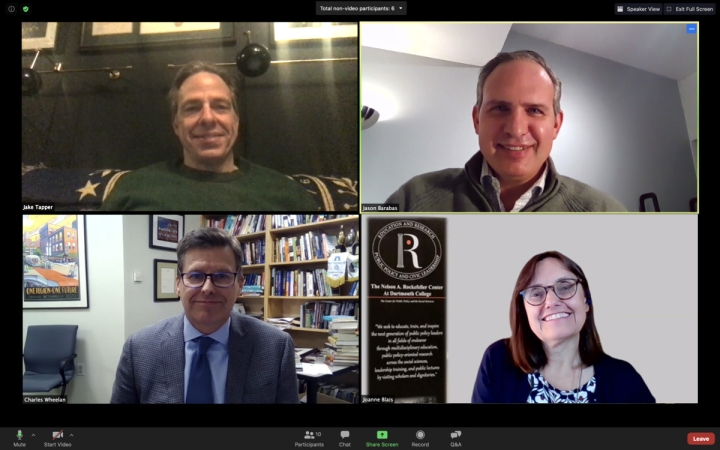 Dartmouth students had the chance to talk over the election of Joe Biden as the 46th president of the United States, discuss the state of politics going forward, and get some career advice from CNN anchor and chief Washington correspondent Jake Tapper ’91 Thursday during a post-election discussion sponsored by the Nelson A. Rockefeller Center for Public Policy.

Tapper was joined by two other Dartmouth alumni for the Rocky Watch online broadcast, introduced by Jason Barabas ’93, director of the Rockefeller Center, and moderated by Charles Wheelan ’88, senior lecturer and policy fellow.

Speaking via Zoom from his home in Washington, D.C., Tapper said he was feeling much more relaxed now that the grueling 2020 campaign and the election night coverage that stretched over more than a week are over. Wheelan also shared questions from students and alumni in a broadcast that had the casual atmosphere of an after-work get-together.

Tapper said President Donald Trump’s continued refusal to accept Biden’s election is one last blow to any kind of positive legacy he might have had on issues like trade, support for American industry, or “draining the swamp.”

Referring to commentary from 2017, Tapper recalled, “I said something along the lines of, ‘He could be a very successful president if he just put the wild conspiracy theories away and got to work.’ ”

Wheelan and Tapper agreed that Biden achieved a resounding victory in both the electoral college and the popular vote, but that Republicans also had much to be happy about in the election of 2020, including gains in the U.S. House, a good chance of holding the Senate, and majorities in many state legislatures.

The so-called red and blue split is much more complicated than many media narratives account for, Tapper said. He and Wheelan pointed to a deep blue state like California having rejected a ballot measure supporting affirmative action, and a deep red state like Florida having voted to raise the minimum wage to $15 an hour.

Florida’s case is a sign that many Trump voters responded to his populist message of supporting well-paying American jobs, Tapper said. This is a theme that Democrats were less successful in communicating, he said.

“Bernie Sanders as labor secretary I’m sure terrifies a lot of people in corporate America, but could theoretically be one of the best decisions Joe Biden makes politically in terms of having somebody advocating to wrest the mantle of populism back from Trump. I don’t think Biden has wrested that back (during the campaign), even though he won the election,” Tapper said.

A number of students asked Tapper about his career path after graduation, whether he could pinpoint a break that put him on the path to success, and what advice he could give new graduates.

“The best thing I can say about being a college student in 2020 is, I swear to God it’s going to get better,” he said.

And there is no single step that leads to success, he said. “It has less to do, in my view, with lucky breaks and more to do with just working and working and working. Showing people, proving your worth, letting rejection roll off your back, and just getting up and grinding it out. That’s my career path.”

Another student asked, given the fact that many prominent Republicans have still not acknowledged Biden’s victory, what advice Tapper had for students interested in government but discouraged by the current toxic atmosphere.

Tapper’s response: The only way to change a flawed world is to get in there and make it better.

“I would encourage you to try to join the government. It is honorable. I spend my life criticizing the government, but I know that there are a lot of good people in it trying to do the right thing, so don’t be discouraged, because there is a light at the end of the tunnel.”

To watch the full discussion with Jake Tapper, visit the Rocky Watch website.