Veteran political reporter breaks the news on “The Late Show with Stephen Colbert.” 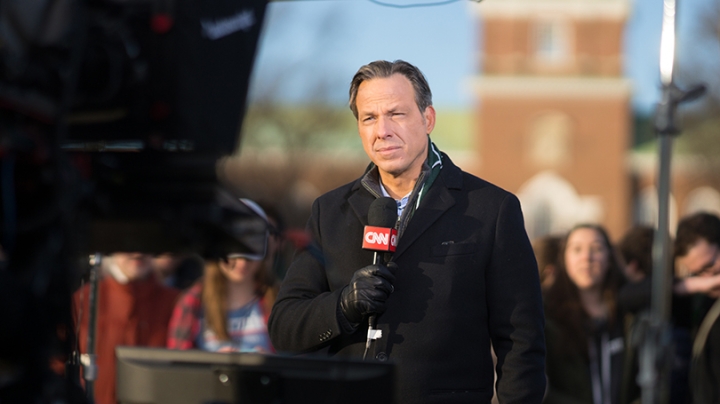 During the presidential primary last February, CNN news anchor Jake Tapper ’91 broadcast his afternoon news show, which included interviews with students, from a director’s chair on the Green in front of Baker-Berry Library. (Photo by Eli Burakian ’00)
2/08/2017
Body

Jake Tapper ’91, award-winning journalist and CNN news anchor, will deliver the main address at Dartmouth’s commencement ceremony for the Class of 2017 on the Green June 11.

As the anchor of CNN’s weekday news program, The Lead with Jake Tapper, as well as the host of the network’s Sunday morning show, State of the Union, Tapper has earned a reputation as a skilled and tenacious questioner of key newsmakers. During the 2016 presidential election cycle Tapper moderated two of the GOP primary debates, one Democratic town hall and conducted extensive interviews with the Republican and Democratic candidates.

During a guest appearance Wednesday night on The Late Show with Stephen Colbert, Tapper shared the news that he would be speaking at his alma mater’s commencement.

“You ended up on the cover of the alumni magazine before I did, even though you have never set foot in Hanover, New Hampshire,” Tapper told Colbert, whose former Comedy Central character was a fictional Dartmouth graduate.

“I actually did go to Dartmouth,” Tapper said, brushing aside Colbert’s suggestion that this was just “fake news” from CNN.

Joking aside, Tapper told Dartmouth News that he was thrilled to be invited to deliver the 2017 commencement address.

“This is a humbling honor and I am very touched. Though I have thankfully progressed beyond my one room double in Cohen Hall, Dartmouth is still a major part of my life,” Tapper said.

Tapper is the author of the New York Times bestseller The Outpost: An Untold Story of American Valor, a history of an isolated outpost in Afghanistan where eight U.S. soldiers died defending their base from attack by hundreds of Taliban fighters.

In addition to The Outpost, Tapper has published the acclaimed books Down and Dirty: The Plot to Steal the Presidency, about the aftermath of the 2000 election, and Body Slam: The Jesse Ventura Story, about the limelight-loving pro wrestler who became the governor of Minnesota.

At Dartmouth, Tapper majored in history modified by visual studies, an unusual combination that the history department approved in support of his interest in political cartooning. He drew the Doonesbury-esque strip Static Cling for the student newspaper, The Dartmouth, and kept up his interest even after veering into journalism, drawing the Capitol Hell strip for the Washington, D.C.-centered Roll Call.

Tapper will receive an honorary degree at the ceremony. His fellow honorary-degree recipients will be announced at a future date.

President Phil Hanlon ’77 will deliver the valedictory address to the graduates during the commencement ceremony. Also speaking will be the student valedictory speaker from the undergraduate senior class, who will be announced the week of commencement, after final grades are calculated.

Dartmouth typically awards about 1,000 bachelor’s degrees and 600 master’s and doctoral degrees in the arts and sciences and from the School of Graduate and Advanced Studies, the Geisel School of Medicine, Thayer School of Engineering, and the Tuck School of Business.

Watch Tapper make the announcement on The Late Show—and give Stephen Colbert a Dartmouth sweatshirt. 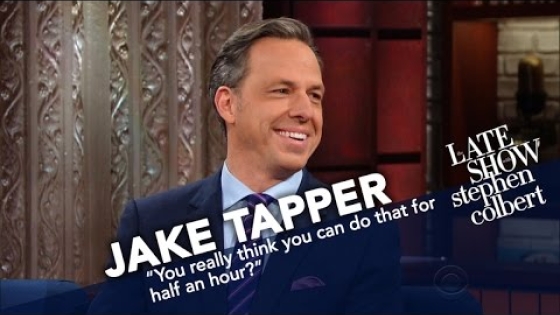