Dartmouth has offered 2,176 students acceptance to the Class of 2020—a socioeconomically, culturally, and geographically diverse group that includes the highest percentage of students of color in the College’s history. 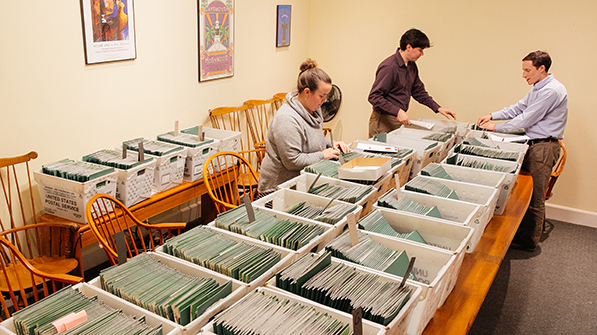 From left, Emma McLeavey-Weeder, Kevin Mathes, and Will Corbett of the admissions office sort through packets that will be sent to admitted students. (Photo by Robert Gill)

Students were able to see their admission decisions today at 5 p.m. by logging on to a secure website hosted by the Office of Admissions. The Twitter and Instagram hashtag #Dartmouth20s saw a surge in celebratory tweets and photos moments after the site went live, and the admissions website posted a student-produced video welcoming the newest Dartmouth class.

The accepted students come from a group 20,675 applicants, representing an admission rate of 10.5 percent. Included in the number of accepted applicants are 494 early decision students and 10 veterans admitted through Dartmouth’s affiliation with the Posse Foundation. Admissions officers expect to enroll 1,120 students in the Class of 2020.

“This is an exceptionally diverse admitted group of students who are also phenomenally talented academically as well as personally accomplished,” says Interim Dean of Admissions and Financial Aid Paul Sunde.

“Not only are more than 94 percent of the students who were ranked from the top 10 percent of their class, but among them are acclaimed musicians, dancers, actors, and writers; academically accomplished multi-sport stars; and authors of nationally recognized scientific papers,” he says.

Of the 2,176 students admitted to the Class of 2020, 51.6 percent are students of color, including African American, Asian American, Latina/o, Native American, and students who self-identify as multiracial. A growing number of Dartmouth students come from public schools. This year, 63 percent of admitted students are public school students, up from 60.8 percent last year, with 25.4 percent this year from private schools, and 11.6 percent from parochial schools.

Of the students accepted to the Class of 2020 from schools that rank, 94.6 percent rank in the top 10 percent of their graduating class, with 37.1 percent honored as valedictorians.

Nearly 48 percent of the admitted students qualify for need-based financial aid, and the average scholarship at the time of admission is $43,915. Over 14 percent of admitted students are eligible for Pell grants, the federal grant program that helps students from low-income families. Total scholarships offered equal $40.2 million, which is $2.5 million higher than last year.

“Our commitment to attracting students from a broad range of backgrounds is resolute,” says Sunde. “At Dartmouth admissions, we continue to expand our engagement with community-based organizations around the country.” 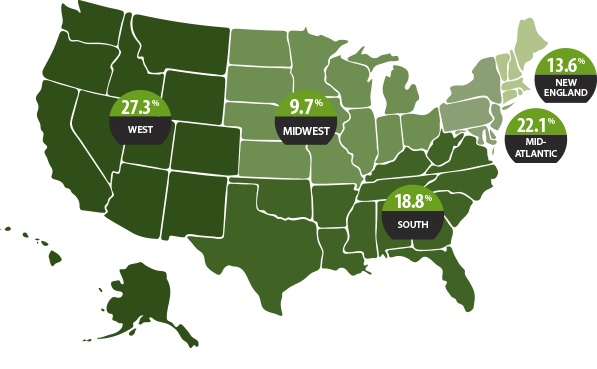 The map shows the regions in the U.S. where admitted students live. Percentages are: 27.3 from the West; 22.1 from the Mid-Atlantic; 18.8 from the South; 13.6 from New England; and 9.7 from the Midwest. (Illustration by Richard Clark)

Of the students who declared an interest in an academic discipline, 43 percent named the sciences, 32.7 picked the social sciences, 9.8 chose the humanities, and 9.7 percent listed interdisciplinary studies as their primary interest; 4.2 percent were undecided.

The Admissions office will host Dimensions of Dartmouth in April for students admitted through regular decision. These one- or two-night on-campus stays, hosted by current undergraduates, are designed to give admitted students a sense of the opportunities Dartmouth offers. The first session will take place Tuesday and Wednesday, April 12 and 13, with the second session running Sunday through Tuesday, April 17, 18, and 19; admitted students are invited to choose the program that works best with their schedules. A plan-your-own-visit option is also available most weekdays from April 1 through April 29.

Alumni will hold events for admitted students in communities nationwide and around the world. The Office of Admissions and the Office of Alumni Relations have partnered with more than 35 alumni leaders and clubs in cities across the globe, including Atlanta, Boston, Chicago, Denver, Honolulu, London, Los Angeles, New York City, Philadelphia, San Francisco, Seattle, Bozeman, Silicon Valley, Singapore, and Washington, D.C., to host celebratory events for admitted students and their families. 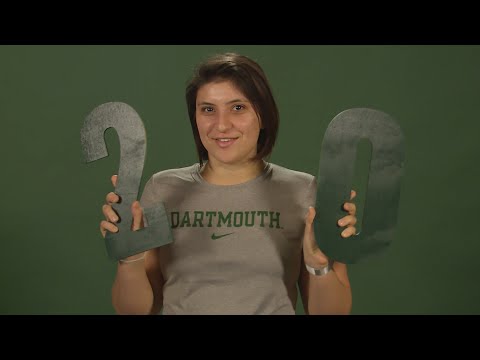